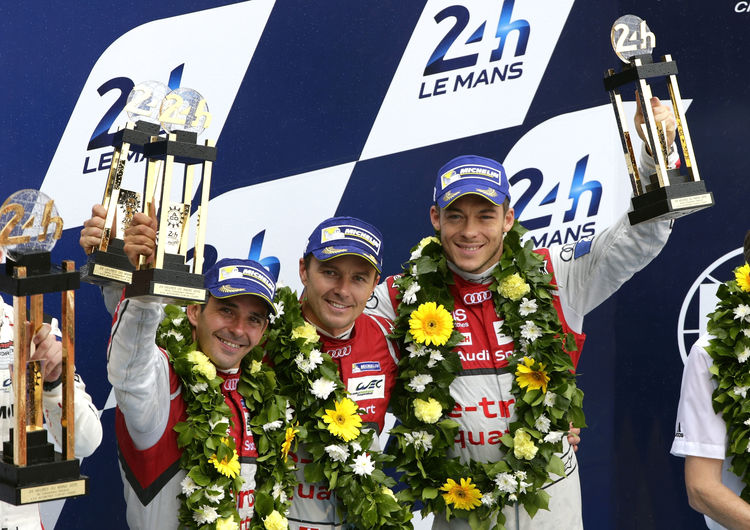 A record crowd of 263,500 spectators witnessed motorsport at the highest level for 24 hours. With a third place, Audi continued its string of podium positions, but missed taking overall victory. Quotes after the race.

Dr. Wolfgang Ullrich (Head of Audi Motorsport): “At Le Mans, you can’t assume that you’re going to win the race every year. Still, that was clearly our intention. We showed that, based on last year’s Audi R18, we developed a fast car that was in contention for victory across large parts of the distance. This was also possible because we’ve got three very strong driver pairings. During the night, we lost some time and were a little unfortunate with our two best-placed cars as well. In the morning, we encountered some more difficulties. But when you have as strong a rival as we did at Le Mans, you’ve got to be perfect to win.”

Chris Reinke (Head of LMP at Audi Sport): “We had all the possibilities in our hands when we arrived here. We brought along an outstanding vehicle. And throughout the whole week, the team did an impeccable job as well. The drivers can’t be blamed in any way either. But at Le Mans you simply need that famous bit of fortune in order to be successful – and that was clearly on the side of our strong competitors today. Congratulations to Porsche Motorsport. They had ambitious plans just like we did and achieved everything today.”

Ralf Jüttner (Team Director Audi Sport Team Joest): “Congratulations to Porsche on their one-two result that is completely reserved. They delivered a tremendous and impeccable race. That’s not what we can say about ourselves this time. We started extremely strong and were incredibly faster than we’d been in qualifying. With that, we could have compensated for the disadvantages we had with the pit stops. But there was the early accident of Loïc (Duval), in which he wasn’t at fault, and a slow puncture with André (Lotterer) – from then on, we’d lost a little of our rhythm. During the night, there was another stage in which we were simply lacking speed. When, to top it off, some body parts came adrift in the morning, it was clear that the race was over, no matter how great a job you do in the pits. For me, it’s clear: if we’d fully used the car’s potential across the whole distance we could have won.”

Marcel Fässler (Audi R18 e-tron quattro #7): “The race wasn’t easy because the pace was very high. Obviously, we’d have preferred clinching a better result but to do that you need to get through the race without any difficulties. Le Mans is a sprint race across 24 hours. That means simply everything has got to fit. We had a car to win, but there were too many issues like a slow puncture or the damaged engine hood – that just cost too much time.”

André Lotterer (Audi R18 e-tron quattro #7): “It wasn’t an easy race. We fought hard, but unfortunately had a few difficulties too many. That’s why we have to be happy with third place. We’re going to learn from the mistakes and come back stronger next year.Fortunately, in third place we’ve scored a lot of points for the drivers’ world championship. That’s still our goal.”

Benoît Tréluyer (Audi R18 e-tron quattro #7): “Besides our skills, we also had the necessary racing luck on our side for many years. That wasn’t the case this year. Unfortunately, our car was repeatedly affected by some minor issues. That comes as a bit of a surprise because Audi always prepares extremely well, as the long list of successes shows. We superbly completed all the tests again this year. In the race, we attacked non-stop. We had the chance to be in contention for victory. Our R18 e-tron quattro was real fun, which helped me a lot especially in my two four-time stints. But Porsche were better this year and deserve the win.”

Lucas di Grassi (Audi R18 e-tron quattro #8): “My third Le Mans and I made it across the finish line for the third time. Once I was second, once third and this time fourth. So, first is still missing. But that’s racing: sometimes you win, and at other times the others do. For me it’s important that you give everything. And we did that, no question. We can leave with our head held high because we delivered a fantastic race – even though we were defeated this time. But that makes us stronger and should motivate us to work even harder so that we can strike back in the next WEC races and at Le Mans in 2016.”

Loïc Duval (Audi R18 e-tron quattro #8): “Except for a few hours during the night, the Audi was the fastest car on track. But that’s not enough in such a tough competition. You also need a little bit of fortune and we didn’t have that today. Congratulations to Porsche on winning. ‘Well done and a big thank you’ also to our team. The mechanics really did everything to give us a car again that was capable of winning. Still, it wasn’t enough for Audi to clinch victory this time. We need to deal with that. At least, Audi was able to celebrate on podium once more.”

Oliver Jarvis (Audi R18 e-tron quattro #8): “Following Loïc’s (Duval) accident, I thought our race was over early. But the mechanics from Audi Sport Team Joest sent us back out on track in an incredibly short period of time. A huge thank you for that. Still: finishing fourth when you’ve got the potential of at least clinching a podium is a disappointment. Congratulations to Porsche on winning. Next year, we’re going for revenge. For our trio this was the first joint Le Mans. We’ve become a really close squad here – we’re going to benefit from that in the coming races. I’m already looking forward to getting into the car again.”

Filipe Albuquerque (Audi R18 e-tron quattro #9): “After I didn’t get to drive in my Le Mans debut last year, I was even more excited about our run. For a long time, things were going really well for us. I felt like I was at home in our Audi and my team-mates did a fantastic job too. Up until the morning hours, we put the Porsche cars under massive pressure. Unfortunately, an issue with the hybrid system took away all our chances. I think it was obvious that, without these issues, we could have finished on podium.”

Marco Bonanomi (Audi R18 e-tron quattro #9): “Strictly looking at our driving performance, my team-mates and I are happy. When our car was running smoothly, we consistently battled for the lead. I’ve got to say: driving this great Audi was sheer pleasure. Unfortunately, like last year, Lady Luck wasn’t on board with us. Unfortunately, we’ve got to live with that. But at the end of the day, you could see what our driver trio is capable of. And that does make me very proud.”

René Rast (Audi R18 e-tron quattro #9): “A good race for me personally. Into the morning hours, we were running in the top group, sometimes even leading the race. Then we lost ground due to hybrid issues. That’s a shame, but that’s racing. Things weren’t going smoothly for the other two Audi cars either. Now, we’re looking ahead to the next races. I drove eight stints, learned a lot about the car, the tires. ‘Thank you’ also to my two mates – we’re a great team.”