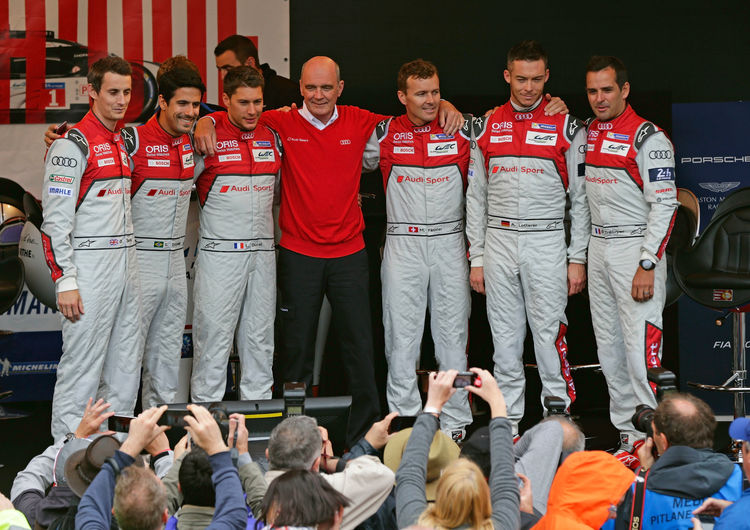 Before the Le Mans 24 Hours the weather went haywire. That is why the starting grid has little indicative value. Quotes before the most important endurance race of the year.

Dr. Wolfgang Ullrich (Head of Audi Motorsport): “The weather conditions on both qualifying days were really extreme this year. We had only brief periods in which the track was dry and offered good grip. On parts of the track it was raining nearly continuously and there were many interruptions. As a result, we lost some time and weren’t able to do all the things we’d been planning to do. In addition, we weren’t out on track with both cars when it was possible to set good times. Consequently, we can’t tell what would have been possible for us on a dry track. We need to accept that and concentrate on the race. Good qualifying results are always nice and good motivation for the team – but for the race their relevance is not that great.”

Ralf Jüttner (Team Director Audi Sport Team Joest): “I can’t remember us ever having had such conditions on the qualifying days at Le Mans. Rain is okay – but if it’s inconsistent it’s a little difficult to do a decent job. To claim that we’re optimally prepared would be a bit of an exaggeration. But I don’t think anyone up and down the pit lane can say that about themselves. Now we have to trust our Le Mans experience and build on that. The performance delivered by the mechanics here up to now has to be emphasized, for instance the repair on our car number ‘8.’ It normally takes five hours and the guys managed it in three hours and 20 minutes and, as a result, gained some valuable track time.”

Marcel Fässler (Audi R18 #7): “Due to the constantly changing weather, it wasn’t easy to get into a rhythm and build the resulting confidence. To find a perfect set-up we’re still lacking some kilometers on a dry track – but everyone has to cope with that. On the test day, we saw that our car fits this track well. The competition will be fierce and the spectators can look forward to a thrilling race. We’re going to try our best.”

André Lotterer (Audi R18 #7): “That surely wasn’t the easiest Le Mans preparation but the conditions were similarly difficult for everyone, although some may have caught a better time in the cockpit than others. I had little luck on both days but was still able to set the best time with our car. But that’s not what we focused on. For us it was important to try out as much with the car as possible in order to be well prepared. We managed to do that.”

Benoît Tréluyer (Audi R18 #7): “Our car was fast from the beginning but the conditions were difficult. We changed the set-up a little but that made us somewhat slower. That’s why we set up our Audi for Thursday once more. It felt very good on a wet track and when it began to dry off, handling remained stable. That’s why we’re starting the race with confidence. The lap times don’t show where we really stand yet.”

Lucas di Grassi (Audi R18 #8): “Our week has been anything but easy so far: rarely constant conditions, rain again and again, and the few laps in normal conditions aren’t very conclusive. Still, we have a car that’s basically well prepared for the 24 hours of racing. We have a strong team backing us, the car has developed well during the course of our tests and we’re in contention. Now we still need the necessary racing fortune.”

Loïc Duval (Audi R18 #8): “The conditions were really tricky. Maybe that wasn’t so bad for preparing for the race when we may be confronted with similar weather changes. On Wednesday, I wasn’t so happy yet with our rain set-up. That was better on Thursday. On a dry track we were competitive anyway. We could see once more that the fans can look forward to a really close battle between Porsche, Toyota and Audi.”

Oliver Jarvis (Audi R18 #8): “Due to the weather conditions and the red flags it was a pretty difficult qualifying session. But the conditions were the same for all the teams. We’d like to start further towards the front but obviously we know that the position you finish in is a lot more important. We’re optimistic for the race. It might become one of the craziest races here I’ve ever participated in. The reliability of the cars will play an important role. I’m excited about the race starting shortly.”