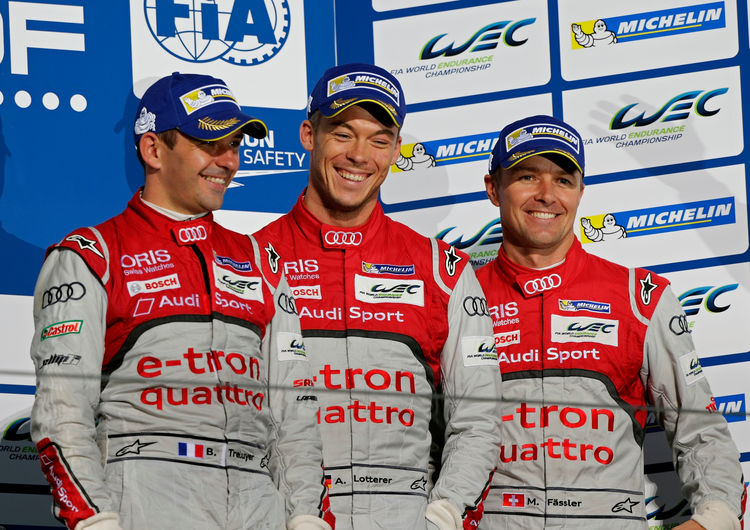 Audi achieved a podium result for the sixth time in succession in the FIA World Endurance Championship (WEC) this season. Quotes after the race.

Dr. Wolfgang Ullrich (Head of Audi Motorsport): “We had the best pace at the beginning and at the end of the race. Unfortunately, halfway through the race, in the transition stage between a wet and dry track, we weren’t as fast as the competition. By switching to dry tires early, we took a risk with car number ‘7’ that didn’t pay off. But you could see that we made a major step in terms of performance. Now, we’re going to try to convert the performance capability of the car into a perfect result in the next race at Shanghai.”

Chris Reinke (Head of LMP at Audi Sport): “In qualifying, we clearly reduced the gap and confirmed our good form in wet conditions in the race. Marcel Fässler even managed to pull clear of the field in the beginning. In spite of a fogged windshield Oliver Jarvis did a very good job of keeping pace as well. A rival was very fortunate during a caution period with their pit stop. We responded by making a risky tire choice that didn’t pay off. That’s when we lost the chance of battling for victory.”

Ralf Jüttner (Team Director Audi Sport Team Joest): “The race started well.When the track was still wet wewere among the fastest cars, but in dry conditions our rivals were stronger. The tables truly turned when the number ‘18’ Porsche was the only top car to pit during a caution period and gained a major advantage in the process. In response, we made the risky decision to give André slicks – in retrospect, this proved to be the wrong choice. The drivers of car number ‘8’ were struggling with difficult visual conditions and still did a good job of keeping pace. Our refueling stops this weekend were very good and we performed by far the quickest tire changes on both cars – we’re proud of this.”

Marcel Fässler (Audi R18 e-tron quattro #7): “The car was very good to drive in the rain and I was able to build an advantage. That was a great feeling. However, it was hard to keep the tire performance at consistent levels across the distance. Further into the race, we were lacking fortune to some extent, but basically we’re in a position of putting Porsche under pressure at the moment. We continue to have good chances of clinching the title.”

André Lotterer (Audi R18 e-tron quattro #7): “The beginning of our race was good because Marcel was simply strong. Then things became a bit difficult. When I saw that our rivals were faster, I had to counter that, so we took the risk of using slicks on a drying track, but our timing was too early. But, basically, our development is headed in the right direction and I’m looking forward to the next races. We scored valuable points today.”

Benoît Tréluyer (Audi R18 e-tron quattro #7): “We caught up with Porsche in terms of lap times. This shows that the team did a very good job. Unfortunately, our tire strategy didn’t pan out. This can happen now and then. Audi managed the fastest race lap, which shows that the R18 e-tron quattro is good to drive even in difficult conditions. It’s important that we continue to have good chances in the Championship. We’re only one point short of the top of the standings.”

Lucas di Grassi (Audi R18 e-tron quattro #8): “We had a good pace and were in contention for a podium position. We’ve notably improved since the race at Austin. For us in number ‘8’ it’s not enough yet to battle for victory. But that has to remain our goal.”

Loïc Duval (Audi R18 e-tron quattro #8): “Fuji was not an easy race. Even though we were struggling with poor visibility, we were consistently fast. A podium result was within reach. We made a step forwards with the Audi R18 e-tron quattro, as our fastest race lap showed as well. That makes me optimistic.”

Oliver Jarvis (Audi R18 e-tron quattro #8): “The race was truly challenging. Struggling with a fogged windshield in rain was strenuous. It was simply about getting through the race. I wasn’t completely happy with the balance of the car. The fastest race lap by Loïc is a way of saying thank you to the whole squad and showed that car number ‘8’ is in contention.”