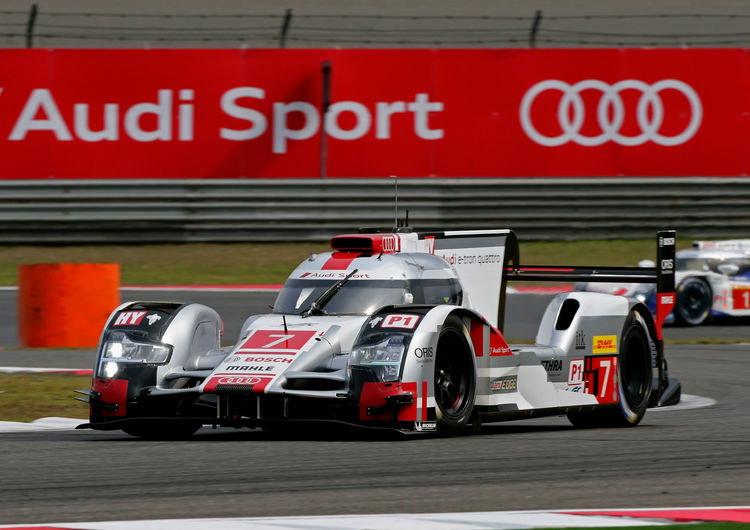 Audi has kept the decision in the FIA World Endurance Championship (WEC) open up to the finale. In Bahrain, the drivers from Audi Sport Team Joest will be battling with the Porsche drivers for the World Championship title on November 21.

Marcel Fässler, André Lotterer and Benoît Tréluyer, with seven podium places in succession, have maintained their chances for the championship title up to the end. In second place of the standings, they are traveling to Bahrain with a twelve-point deficit, with 26 points yet to be awarded in the island state. “This is arguably the most thrilling season of the FIA World Endurance Championship. The decision will only be made in the final race,” says Head of Audi Motorsport Dr. Wolfgang Ullrich. “My thanks for this go to an untiring squad that has never given up, continued to develop the Audi R18 e-tron quattro, and worked hard.”

A statistical characteristic underscores the quality of this title race: no other driver squad has been on podium this year as often as Fässler/Lotterer/Tréluyer. They celebrated two victories, a second and four third places.

At the same time, Audi is aware of how difficult a feat winning an FIA WEC title for the third time after 2012 and 2013 will be. Even if Fässler/Lotterer/Tréluyer, as in 2012, were to lead an Audi one-two victory in Bahrain, such a result would not secure success in the championship for them. In this case, the current leaders of the standings, Timo Bernhard/Brendon Hartley/Mark Webber, would have to finish in no better than fourth place for the Audi drivers to claim the title. “We’re going to give everything and hope for a little fortune to still win the championship,” says Chris Reinke, Head of LMP at Audi Sport. “Giving up is out of the question for us – the opposite is true. As long as there’s a chance, we’re going to battle for the title. In tough conditions such as those in Bahrain, quite a bit is possible.”

The race in the desert makes maximum demands on the technology and the drivers. The 5.412-kilometer track has four longer straights, followed by very tight corners. This results in hard braking maneuvers from near-300 km/h several times per lap. In addition, there are geographic and climatic demands that make the set-up of the race cars even more difficult. Sand from the surrounding desert impairs grip on the tarmac, with air temperatures between 25 and 30 degrees centigrade and track temperatures of 40 degrees being the rule. As the sun sets about two hours after the start, the 6-hour round as a night race under floodlights will be holding further imponderables in store. In Germany, the TV channel Eurosport will be airing live coverage of the title decision’s final stage. It can be watched on November 21 from 18.00 to 19.15.

Bahrain is part of the Region Middle East, an Audi growth market. Since 2010, Audi’s delivery volume, including the reporting year of 2014, has nearly doubled to 11,130 units. While Audi is battling for sporting honors of the 2015 season in Bahrain, an up-and-coming driver looks forward to a unique opportunity. A day following the finale, the FIA WEC, in collaboration with the leading teams, is making testing opportunities available to young talents. As a result, Richie Stanaway from New Zealand will be able to test the Audi R18 e-tron quattro as part of the FIA WEC’s rookie test program in Bahrain two days before his 24th birthday.