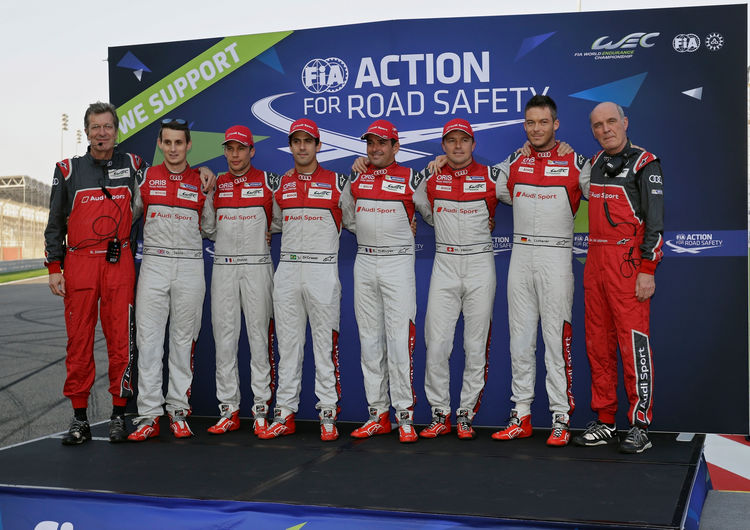 Dr. Wolfgang Ullrich (Head of Audi Motorsport): “There’s no sweeter way to end such a project than with a one-two victory. It was a very emotional race and the entire FIA WEC made it very difficult for us to quit. Today, you could tell that we’ve grown into a big family over many years. Now, we’re going to look ahead, giving our all in our new projects, just like we’ve come to be known. What happened in the WEC will not repeat itself. These 18 years of the sports car project have been a very important part of my professional life that I tremendously enjoyed. And I was fortunate enough to have always worked together with fantastic people.”

Stefan Dreyer (Head of LMP): “The greatest thing in motorsport is to stand on the top step of the podium and to have achieved the maximum in positions one and two. This victory was long overdue and is the reward for the hard work of the trackside teams and those at home. The drivers and Audi Sport Team Joest did a perfect job today and deserve having clinched the vice-champions’ titles. I feel exhausted and am very emotional following this last LMP race victory achieved by Audi. Many thanks to everyone for their trust – we were a superb team.”

Ralf Jüttner (Team Director Audi Sport Team Joest): “After 18 years with Audi, a one-two victory is the sweetest ending you could imagine. I’d like to thank my team that did a perfect job and, of course, Audi for this era. We’re going to leave no stone unturned to develop a new program for our squad. Today, we’re celebrating our one-two victory and the vice-championship for Lucas di Grassi, Loïc Duval and Oliver Jarvis. All six drivers drove sensationally. An era is ending with a result that this era deserves.”

Lucas di Grassi (Audi R18 #8): “It’s a good feeling to end this season with a golden result as a team. We showed that we developed as a driver squad, and having won twice this year is great. Naturally, I’m sad that Audi and most of us are leaving the WEC, which is such a big family. I’m not only going to miss the races, but the people as well. I wasn’t familiar yet with endurance racing when I drove for Audi for the first time in 2012, but I’ve come to love it very much. I’ll miss these cars and the adrenaline of the endurance races.”

Loïc Duval (Audi R18 #8): “It means a lot to us to be the last drivers to have won a race in Le Mans prototypes for Audi.We were absolutely competitive today. When I was sitting in the car a little downforce was lacking, but the mechanics cleaned the bodywork and in the process discovered a plastic bag that impaired aerodynamics. The whole team did a superb job. It was a very emotional weekend. My feelings were even stronger than in the 2013 title win. I’m happy and proud.”

Oliver Jarvis (Audi R18 #8): “We had a fantastic year. Our weekend was very emotional. Naturally, we wanted to win. We managed to do that, and it was the perfect conclusion of Audi’s sports car program. Now we’re leaving the FIA WEC in the hands of the two strong teams of Toyota and Porsche – where it’s in good hands. Audi will be missed by many, but the championship is incredibly strong nonetheless.”

Marcel Fässler (Audi R18 #7): “Sincere congratulations toRomain Dumas, Neel Jani and Marc Lieb on winning the world championship title. My race started with some great and very fair battles. Even in the past two years, the duels with Toyota and Porsche were tremendous. I’m definitely going to miss that. Today, I extremely enjoyed every lap in this car. Having achieved so much with Audi Sport, Audi Sport Team Joest and with my two teammates in these seven years compares with nothing else. Plus, our rapport was outstanding, both on and off the track.”

André Lotterer (Audi R18 #7): “Today, we showed what the car is truly capable of. The team worked very hard for this aim throughout the season. Like Marcel, I enjoyed every lap to the full. This one-two victory is the sweetest farewell gift for Audi. It won’t be easy now to go different ways. We were kind of a dream team and lived this dream. I’m going to miss that very much.”

Benoît Tréluyer (Audi R18 #7): “A huge thank you to my teammates, the entire squad and toDr. Ullrich. Congratulations to our teammates on a sensational race and to the Porsche drivers on winning the title. Thank you also to the FIA WEC for this great time. Now I’m going to enjoy my life and do something different. Thank you very much to everyone who helped me in my career.”