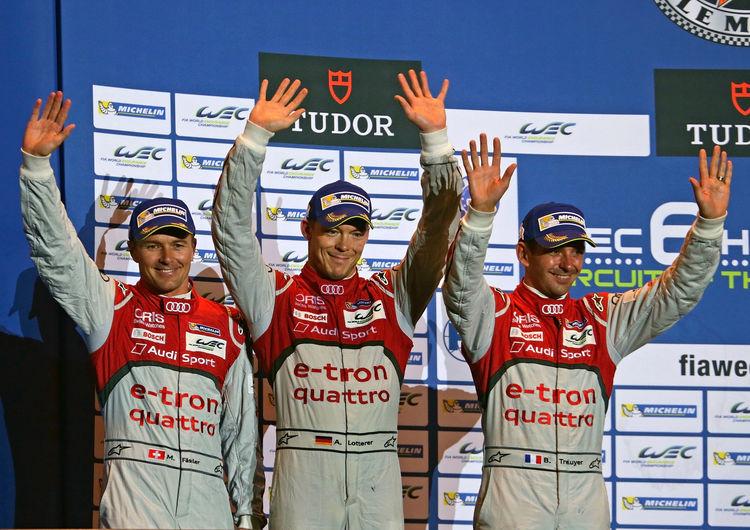 Both driver squads of the Audi R18 e-tron quattro achieved a podium result in round five of the FIA World Endurance Championship (WEC) at Austin. Quotes following the solid team performance in Texas.

Dr. Wolfgang Ullrich (Head of Audi Motorsport): “We really had a lot of work before the fifth race weekend of theFIA WEC, so in that respect, the result is a positive one. A big compliment to everyone for it – the squad made a huge effort that we’re thankful for. At Austin, we came closer to our competitors. Our aim is to make the next step in the upcoming race at Fuji so that we’ll be able to battle for victories again as we did at the beginning of the season.”

Chris Reinke (Head of LMP at Audi Sport): “We were expecting a tough race because it’s very hot in Texas at this time of the year. Unfortunately, in addition to these demands, there were some technical issues that we started the weekend with. That’s why we lost some practice time. In spite of this, due to our experiences and the simulations, we found a good set-up for the race. That paid off and, for the first time this year, we clinched two podium places. This shows the performance of a good squad.”

Ralf Jüttner (Team Director Audi Sport Team Joest): “An extreme workload – that’s how our preparation for the round at Austin began. Even before, at Neuburg, everyone worked hard for this weekend and during the race week we had very long days at Austin as well. ‘Well done’ to the whole team! I’m happy that both cars achieved a podium result. We were closer on the heels of our competitors than previously at the Nürburgring. Now we’re going to leave no stone unturned to defend our advantage in the drivers’ standings all the way to the end.”

Marcel Fässler (Audi R18 e-tron quattro #7): “I always tried to attack, but the rhythm in traffic on track was never the same. But that’s part of endurance racing too. Obviously, we’d have liked finishing in front of Porsche, but we weren’t fast enough for that. We’re set on changing that before the next race at Fuji.”

André Lotterer (Audi R18 e-tron quattro #7): “Our rivals were stronger especially in traffic. For us, it was about finding a set-up that all drivers were happy with. In the second half of the race, the car was a little better to drive than at the beginning. We’d have liked being in contention in the battle for victory, but we weren’t fast enough. Today, the reliability of the Audi R18 e-tron quattro paid off. We finished in second place and our teammates in third.”

Benoît Tréluyer (Audi R18 e-tron quattro #7): “Our weekend was rough. On Thursday, we lost a lot of time in practice when our car wasn’t running. Our mechanics had a mountain of work to cope with. In the race, the car was okay. We had to give everything, the strategy was good, and second place the reward. We need to improve once more now in order to advance. Congratulations to Porsche on clinching victory.”

Lucas di Grassi (Audi R18 e-tron quattro #8): “The battle between the manufacturers is intense. The result at Austin proved that Porsche has worked out an advantage. We tried to compensate for that by impeccably driving through traffic and losing as little time as possible in the process. But that’s not enough. We need to become even faster in order to be competitive. We’re all working on the goal of achieving the best for Audi.”

Loïc Duval (Audi R18 e-tron quattro #8): “To challenge our opponents, we have to go to the limit and improve some more. Porsche deserves this victory. Without our stop-and-go penalty, we’d have even been a bit better. Our car was pretty good in the race, but we can still change a few more things for the next round. In the battle for the championship, every point counts for Audi.”

Oliver Jarvis (Audi R18 e-tron quattro #8): “We’re taking some positive aspects and the podium place home from the weekend. Up to our penalty, we were battling with Porsche. We definitely took some risks in traffic and made good time in the process. In the remaining races, we’d like to improve once more in order to end the second half of the season on a positive note.”