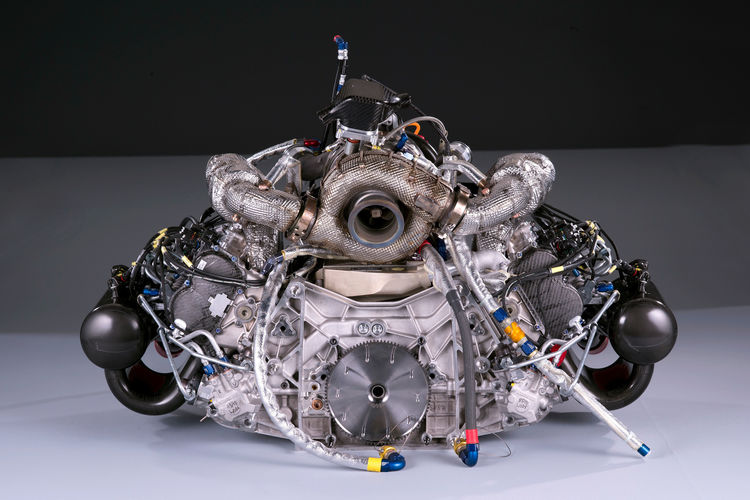 Audi relies on a highly efficient engine concept in the R18. The interaction between the merely 3.7-liter V6 TDI unit with an unusually designed single turbocharger and VTG technology is both complex and intriguing. It gives the Audi factory drivers optimum opportunities to set their sights on the next success at the Le Mans 24 Hours (June 16/17, 2012).

“Actually, it’s a shame that the general public never has the opportunity to directly follow the technological progress of our engineers,” muses Head of Audi Motorsport Dr. Wolfgang Ullrich. If the work done by his staff is too effective the officials who are responsible for the regulations will regularly curb the momentum of the inventors in order to keep the lap times from becoming too fast year by year. A comparison serves to illustrate the point. When Audi won the Le Mans 24 Hours with a TDI engine for the first time in 2006 the Audi R10 TDI managed to set its fastest race lap in 3m 31.211s. Despite significant restrictions imposed by the regulations the nominally less powerful Audi R18 TDI on clinching the brand’s tenth Le Mans victory last year did its best lap around the circuit in 3m 25.289s. How much faster might it have been if the regulations had not been changed?

“Obviously, a large number of factors affect these measurable advances,” emphasizes Dr. Ullrich. “Vehicle technology as a whole, including the chassis, drive and aerodynamics, plays a role just like the weather, the driver or the racing situation. Yet the TDI race engines provide a particularly striking example of the progress that has been achieved.” In 2006, Audi won with a V12 engine which had 5.5 liters of displacement. Now, only six cylinders are operating in the most recent  Audi R18. According to the regulations displacement was reduced to 3.7 liters. This means that in total the engine used in the current vehicle generation makes do with half of the cylinders, has 32 percent less cubic capacity and in the 2011 season made it possible for the R18 to improve its lap time by 2.8 percent nonetheless.

“To achieve such enormous increases the combustion chamber of the engine operates with much higher pressures and temperatures today than in the past,” explains Ulrich Baretzky, Head of Engine Development at Audi Sport. “This has resulted in considerably higher performance of the piston areas and the cylinders.” Now, each cylinder has to deliver around 60 percent more performance than it did in the Audi R10 TDI in 2006.

The engine developers at Audi Sport had to venture into new terrain for this purpose. The charging concept of the Audi R18 has been a particularly well-kept secret up to now. The engineers designed a central mono turbo system in the inside V of the engine (“hot side inside”) which in combination with the inboard exhaust manifolds makes particularly efficient use of the laws of physics. A single, large turbine increases overall efficiency, as gap losses are significantly reduced. Consolidating the entire exhaust flow in a single turbine leads to higher turbine performance and more uniform loading by exhaust gas surges. In the extremely short pipes of the exhaust system in front of the turbo clearly less thermal energy is lost. This increases performance plus the turbine’s exhaust gas temperature due to the higher energy content of the exhaust gas and makes the required capacity available on the compressor side where around 2,000 cubic meters of air per hour must be compressed for efficient combustion. The mono turbocharger thus has to put through a similar amount of charge air for over 375 kW (510 hp) as the two previous turbochargers in the V10 TDI for 404 kW (550 hp).

The unique design of this charger was kept under wraps up to now. The exhaust manifolds located on the inside of the compact V6 engine let the exhaust gas flow radially into the charger from both sides. The housing of the turbine wheel has two inlets for the exhaust gas flow and one axial outlet. The compressor side is of a very similar design. The charger aspirates air in axial direction from a central influx. After compression, the air exits again on two sides to optimally supply both cylinder banks. It is cooled down in two intercoolers before being routed to the combustion chambers of the V6 engine.

The variable turbine geometry (VTG) of the turbocharger has provided another key to this technological breakthrough. It makes it possible to guide the exhaust gas flow in a way that the turbine can continuously be adjusted to varying operating conditions such as load changes. “Without it, the entire concept of a compact downsized engine with an inboard single turbocharger would have been inconceivable,” says Ulrich Baretzky. “The response of a single, large charger without VTG would be far too low. Thanks to the variable geometry we have resolved this issue.” While guide vane ring adjustment has long become standard in Audi production vehicles the modification required to handle the high thermal loads occurring in motorsport posed a special challenge.

“The temperatures there are extreme,” says Ulrich Baretzky. “Temperatures of up to 1,050 degrees Celsius in the turbine and in the VTG can only be handled by high-temperature-resistant steel alloys.” In addition, chemical corrosion, also known as scaling, must be avoided. Bearing play and clearances are important too. “A technology that is heat-resistant and withstands large expansion must, conversely, not exhibit any increase in clearances when temperatures are low and has to remain mobile at all times,” explains the engineer. These are exactly the technologies which Audi has developed together with its long-standing turbo partner Honeywell Garrett.

Audi has successfully resolved these challenges, and the drivers continually benefit from these achievements. When during a shifting event, which lasts around 30 milliseconds without operating the clutch, injection is reduced there is a risk of charge pressure loss. However, thanks to sophisticated electronic shifting strategies and a sensitive actuator, Audi’s VTG system provides the required quick response. Even the Le Mans organizer ACO was amazed. When the ACO’s technical stewards read the engine data they did not find any indications of charge pressure having dropped during shifting events.

In the Audi R18, Audi explored numerous areas at the limit. “I’d describe the solution of a V6 with a single turbocharger as one of the greatest technical risks we’ve ever taken in engine design for the sports car project,” says Ulrich Baretzky. “It was about carefully approaching the absolute limits of what is feasible.” The production side of the house will endeavor to gain more output from downsized engines with less cubic capacity in the future as well. This means that, as in the case of the V6 TDI 3.7, ignition pressures and temperatures will increase there too. This also applies to injection pressures which in current production engines rise to around 2,000 bar, while in the Le Mans TDI engines 2,600 bar are already being surpassed by far. This has a positive influence on fuel consumption, performance and exhaust gas quality, yet increases the thermal and mechanical loads particularly in the combustion chamber. Audi Sport has developed special calculation methods for its cylinder heads operating under maximum loads that will be made available to AUDI AG’s Technical Development for future production vehicle developments. With respect to downsizing the future will see a lot more parallels where sport and volume production benefit from each other.

The fact that the V6 3.7l TDI was voted “Race Engine of the Year 2011” by a high-caliber judging panel at the beginning of the year is a nice reward for the forward-thinking work of the entire team of engineers.