Skip to content
We are using cookies for a better user experience.
08/21/19
Neuburg a. d. Donau
Sports

Vincent Vosse: “We are very happy to be involved in DTM” 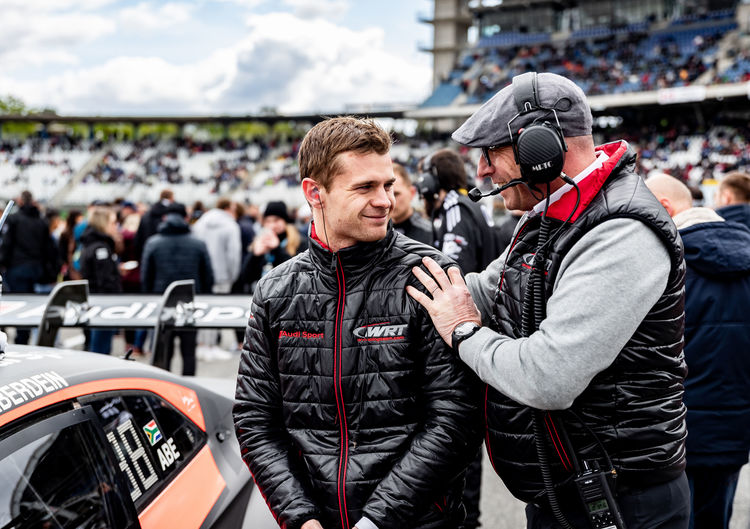 WRT Team Audi Sport is the first customer team in the new DTM era and for many the team has been one of the biggest surprises of the year. The two DTM rookies Jonathan Aberdein (21) and Pietro Fittipaldi (23) are regular points scorers with their Audi RS 5 DTM cars. Before the two DTM races at the Lausitzring (Saturday and Sunday live from 13:00 CEST on SAT.1 in Germany), team principal Vincent Vosse talks about the Belgian team’s debut season so far.

This Sunday at the Lausitzring, DTM is celebrating its 500th race. Can you remember when you started following DTM?
I watched some DTM races at Zolder in the early 90’s. But what I really remember was DTM in 1995. This was the time with Alfa Romeo, Mercedes and the Opel Calibra. I was coming from single seaters. Jason Watt and Jan Magnussen were close friends of mine. They were just entering DTM with one of them at Alfa Romeo and the other at Mercedes. And those were some great years for the DTM.

Which driver has impressed you the most in the history of DTM ?
Definitely Bernd Schneider – and he still keeps on impressing me.

Have you ever driven a DTM car?
No, unfortunately.

Would you like to sample the new Audi RS 5 DTM?
Yes, this would be interesting. Maybe I should ask Dieter (Gass). At least we would not need much material for the insert of the driving seat ...

Do you like the DTM?
The DTM is very impressive. The racing is very good and the quality of the teams and the drivers is just great. For me, this category has a bright future, because I think it’s a really fantastic platform.

The first DTM season for WRT is already drawing to a close. Was it the right decision to join DTM as a customer team?
Yes, with no doubt. We have the right environment and the guys from Audi did a great job to help us. We are very happy to be involved in DTM.

Would you prefer to see more customer teams competing with you in the future in DTM?
Yes. This is the intension and this was the goal. The deal was that we could also have seen a customer team from BMW, which did not happen in the end. If I have one disappointment from the 2019 season, this would be it.

Apart from the Norisring, your team has scored points in every DTM weekend. Are you happy with the results so far?
It’s always difficult to say something like this. I would probably say: yes, internally we are happy. We have shown some good potential and we’ve finished fourth and fifth here and there. But we can see that the potential is also there for a podium result, which has not happened yet. A podium would really have been great and the goal is still there for the last races of the season.

Is this goal realistic while fighting against the factory teams?
A podium is not easy to achieve in DTM. But with the potential of Jonathan (Aberdein) and Pietro (Fittipaldi), it’s definitely possible. Take Brands Hatch for example: Jonathan was running in seventh position three minutes from the end, only four seconds behind the leader. Adding to this, Pietro also set the fastest lap. This gives an idea of how competitive we were. Yes: I’m happy with what we have done up to now. I could not have expected this. I would not have been surprised by being close behind the six factory Audis in qualifiyng, but we could not have expected that we would sometimes be in front of them.

Jonathan Aberdein has twice started from the front row. Are you suprised by his performance as a rookie driver?
Both of them have been surprising us. Jonathan is easier to see, because he has already qualified second twice and was very close to putting the car on pole at Assen, but Pietro has also shown strong performances. In the end, it’s a perfect scenario for us having two rookie drivers. If we had had two experienced drivers, each expecting to be at the front, it would have been more difficult if we were unable to deliver the best. We are still learning a lot and discovering more about DTM. We should not think that we are already there.

What makes DTM so difficult?
For example the pit stops. We’ve been the benchmark in every category that we’ve done in the past. We are struggeling quite a lot with the pit stops in DTM. You need four people who are each fully involved. The gunners and the wheelmen are so important. Practice is key. When you see the way we do pit stops in GT racing, this is more of a physical exercise. It’s something very different in DTM. You have to train hard. Every millimeter, every detail has to be covered. It’s so difficult. It will be one of our goals for the winter to work on that. In DTM, everyone has the same material – so it’s really up to you.

Has this been the most difficult aspect for you in DTM this year?
This is not the only thing. Understanding the DTM was the most difficult part. Why was (BMW driver Marco) Wittmann on pole on Saturday at Brands Hatch and then he only finished twelfth on Sunday? These are the strange things that can happen in DTM and you need to understand why they happen. Otherwise, you will always feel like you do not have things under control – with you only being reactive instead of being proactive.

Did you expect this or did it come as a surprise for you?
I expected it.

Is there anything that should be changed in DTM for the future?
Yes. Our positions at the end of the races ... What I hate is the amount of money we have to spend to have the right radio equipment and not to be able to use it properly as we are not allowed to speak to the drivers except in the pitlane. MotoGP has great races without radio. Formula One has great races with radio.

How is your relationship with the Audi factory teams?
Great and this I could not really have anticipated. I knew Ernst Moser and Phoenix from the GT program, but I had never worked with ABT or Rosberg before. We have received help from all three teams. So far, there’s a very good atmosphere between all of us. They’ve been very kind and very helpful. It’s a nice feeling, a typical Audi feeling.

Will WRT continue in DTM next year?
This has always been our goal. When we made this agreement, the goal was always to be there for a minimum of three years. We have to do some reporting and evaluation at the end of the year, to see where we are and if the DTM endevour is adding some value to our team. But yes: I want to continue in DTM.

What is your target for the final six races of the season?
We already finished fourth at Assen, but running seventh shortly before the end at Brands Hatch on Sunday was the best performance of the team so far. We were only some four seconds behind the leader. This is more important for me than finishing fourth, twenty seconds from the race winner. It was a great achievement from everyone in the team to be able to be fast and consistent. Let’s hope that we’ll be in this position again in the next races. If it’s a podium: great. If it’s not a podium, but we’re close behind the leader, I will also be very happy.

You mentioned Brands Hatch where you also suffered two crashes in qualifying at the same time ...

Brands Hatch was a dramatic weekend for us with the two crashes in qualifying on Saturday. We were able to rebuild Pietro’s car overnight. He qualified seventh with that car and set the fastest lap in the race. This means that our guys did a great job rebuilding the car in a rush overnight. We have not had any technical issues with our cars so far, nothing that has stopped us from taking part in a free practice, qualifying or race. The Audi RS 5 DTM is a great car, but we do not have ten people from Audi in the garage helping us to make sure that our cars are perfect. We do that on our own. This give us great satisfaction.