Skip to content
We are using cookies for a better user experience.
11/02/20
Neuburg a. d. Donau
Sport

Victory and championship lead for Audi in the ADAC GT Masters 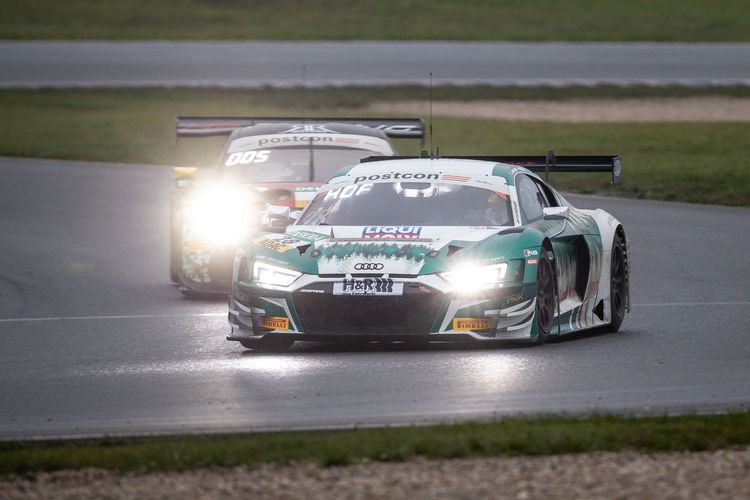 Third win of the season, championship lead and a class title: The Audi customer teams in the ADAC GT Masters had every reason to celebrate at the sixth race weekend at the Lausitzring. Audi Sport driver Christopher Haase and Max Hofer achieved their first victory of the season for the Montaplast by Land-Motorsport team in Saturday’s race. The Austrian Hofer had started into the wet first half of the race in fifth place and opted with his team for a late pit stop. When Christopher Haase took over the Audi R8 LMS and returned to the track, he led the race. Last year’s Junior Champion Hofer celebrated his first and Haase his twelfth overall victory in this racing series with a lead of 0.147 seconds. The Audi R8 LMS scored a win the ADAC GT Masters for the third time this year. Happy faces at the Rutronik Racing team as well: for the two Audi Sport drivers and reigning champions Kevin van der Linde and Patric Niederhauser, a fifth and sixth place in the Audi R8 LMS was enough to keep the championship lead. The South African and the Swiss travel to the finale in one week’s time with a five-point lead. A total of five drivers can still become champions at Oschersleben. One Audi privateer secured an early title in a category classification. Elia Erhart won the Pirelli Trophy classification of the 2020 season in the Audi R8 LMS in the Lausitz. It is reserved for drivers without a professional career.

Second place at the start: At the beginning of the compact season of the Thailand Super Series, which only consists of two weekends, Team B-Quik Absolute Racing achieved a podium finish with the Audi R8 LMS. On the Chang International Circuit in Buriram, last year’s champion Sandy Stuvik started the second race from third place on the grid. At the pit stop the Thai handed over the car to his teammate in fourth place. After several competitors had received penalties, Daniel Bilski led the race. In the battle for victory, the Australian amateur driver ended up second, 5.4 seconds behind the winners.

Second victory of the season in America: Team CarBahn with Peregrine Racing celebrated its second victory of the season in the IMSA Michelin Pilot Challenge. The reigning champions Tyler McQuarrie/Jeff Westphal, who won a race in the Audi R8 LMS GT4 for the first time this season at Sebring in July, were once again at the top of the podium at the ninth event at Laguna Seca. Westphal managed a photo finish after a catch-up race: 25 minutes before the end of the race, the 34-year-old American was still in fourth place. Then he overtook two of the front runners on the Californian circuit. On the last lap of the two-hour race, he fought a battle over several corners at centimeter intervals with the previously leading Aston Martin and won by 0.757 seconds. McQuarrie/Westphal are second in the championship before the final race at Sebring in two weeks time, 15 points behind.

Amateur title success: Two second places at the finale in Barcelona were enough for Daniel Díaz-Varela and Manel Cerqueda to win the amateur classification in the GT Cup Open Europe for the first time in the Audi R8 LMS GT4. They finished in front of ten other drivers in the standings and were second in the overall classification. The Spaniard and the Andorran have been driving the Audi R8 LMS GT4 of the Spanish team Baporo Motorsport since last year. This year, they achieved one victory, six second places and one third position in the European racing series.

Second place in the Lausitz: In the ADAC GT4 Germany, the T3-HRT-Motorsport team achieved a podium result with the Audi R8 LMS GT4 on the fifth race weekend. With two red flags and a safety car, the conditions at the Lausitzring were challenging as the track dried up and twilight fell on Sunday. William Tregurtha/Hugo Sasse had started the race in sixth place. The British-German driver combination improved to second place in the one-hour competition. After finishing third at the Sachsenring at the beginning of October, the driver team thus achieved its best result to date with the Audi R8 LMS GT4.

Two victories in club racing: Sophie Hofmann achieved two victories in the Audi R8 LMS GT4 in the Norddeutscher ADAC Börde Tourenwagen Cup. In the first sprint at Oschersleben, she won her class and finished fourth overall, and in the second sprint she even took overall victory.

Class title in the FIA WTCR: Team Comtoyou Racing celebrated an early title win in the FIA WTCR. The Belgian Gilles Magnus in the Audi RS 3 LMS is uncatchable in the rookie classification after five of six events. In 13 individual races since September, the talent has won the class for young drivers ten times and built up a 130-point lead before the finale in Adria. He celebrated three of his class victories on November 1 at the fifth race weekend in Aragón. There, with third place overall in the first race, he also achieved the best result of the four Audi privateers competing in Spain. Magnus also won the TAG Heuer Best Lap Trophy for the fastest lap of the weekend. With five young drivers, almost a quarter of all FIA WTCR starters is participating in the rookie classification this year. For the Audi RS 3 LMS it is already the sixth class title in the current season and the 31st success of its kind overall. Gilles Magnus is 21 years old and in December 2018 he won a selection competition organized by the Belgian automobile club RACB in cooperation with Audi Sport in Neuburg. After a season in TCR Europe, he has been promoted to the FIA WTCR this year. In the FIA WTCR Trophy classification for private drivers, Magnus holds second place before the finale, followed by his teammates Nathanaël Berthon and Tom Coronel.

Second victory of the season in Japan: The private Audi team Waimarama Kizuna Racing won the TCR class in the third round of the Super Taikyu Series in Japan. Having already won the season opener, the team fought a close battle with Honda Team Floral Racing on the third race weekend in Okayama. One element of success was the first pit stop, during which the Audi customer team used a safety car phase to minimize the time loss. After three hours of racing, Kizuna/Katsumasa Chiyo/Hironobu Yasuda/Riki Okusa in the Audi RS 3 LMS won by 4.099 seconds. This increased their lead in the standings from five points to eight at the halfway point of the season. Third place went to another team that relies on the RS 3 LMS: Audi Team Mars was on the podium with Taketoshi Matsui/Masanobu Kato/Masato Shimoyama/Yousuke Yamazaki.

Second place at Laguna Seca: Gavin Ernstone and Jon Morley finished second in the ninth round of the IMSA Michelin Pilot Challenge in the USA. After two hours of racing they were 9.3 seconds behind at Laguna Seca. The two drivers share an Audi RS 3 LMS from the Road Shagger Racing team and, as the best Audi team before the finale, are third in the standings.