Skip to content
We are using cookies for a better user experience.
09/09/19
Neuburg a. d. Donau
Sports 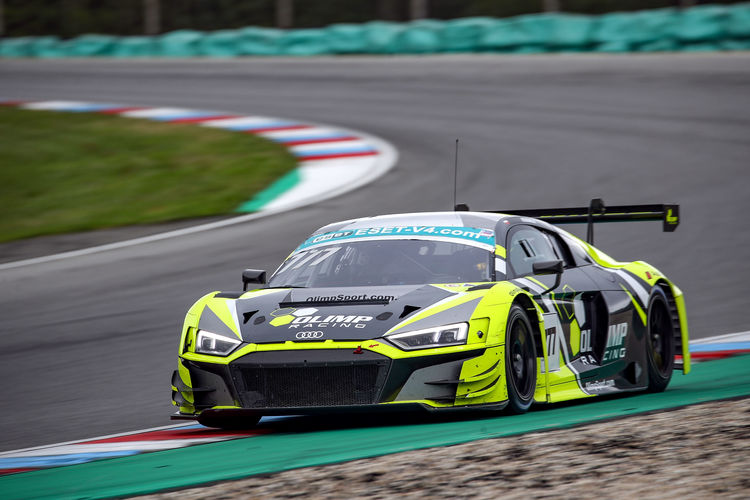 Audi Sport customer racing delivered a strong performance on the race track at Brno thanks to its customer team Olimp Racing. In the FIA CEZ, the GT3 sports cars of the Polish team won two sprint events and one endurance race.

Three one-two results at Brno: The Audi Sport customer teams in Eastern Europe dominated the race weekend of the FIA CEZ. In the season’s sixth endurance race, the Audi R8 LMS scored its sixth victory on the circuit of Brno in the Czech Republic. Marcin Jedlinski won the round in an Audi R8 LMS ahead of Richard Chlad jr. in an Audi R8 LMS ultra. In the sprint classification, the race marked the eighth event. It was also won by the Pole Jedlinski ahead of the Czech Chlad jr. The Olimp Racing team from Poland was victorious in the second sprint race, too: this time, Mateusz Lisowski in an Audi R8 LMS celebrated the GT3 class win ahead of Richard Chlad jr. from the K & K Racing team.

Runner-up in the Eifel: In the sixth round of the VLN Endurance Championship Nürburgring, Car Collection Motorsport achieved its best result this season. Audi Sport drivers Frank Stippler and Pierre Kaffer in an Audi R8 LMS of the Hessian team finished overall runners-up after four hours of racing.

Podium finishes at Zolder: In round seven of the DMV GTC, two different teams clinched trophies with the Audi R8 LMS. In the first sprint, Simon Reicher in third position for Yaco Racing was the best Audi driver while in the second race Isaac Tutumlu Lopez achieved third position for Car Collection Motorsport. In the Dunlop 60 race, Simon Reicher finished runner-up ahead of Dirg Parhofer/Isaac Tutumlu Lopez.

First podium finish for Baporo Motorsport: On the fourth race weekend of the GT Cup Open Europe racing series being held for the first time this year, the Spanish customer team Baporo Motorsport celebrated its first podium finish. The Spaniard Daniel Díaz-Varela and his Andorran teammate Manel Cerqueda in the first race at Silverstone in an Audi R8 LMS GT4 improved from the sixth spot on the grid to third position, which also earned them the Am class win ahead of eight other competitors.

Suspense in Scandinavia: The Audi customer team Brink Motorsport is causing suspense in the TCR Scandinavia up until the finale. On its sixth and penultimate race weekend, the series visited the Jyllandsringen in Denmark. In the first sprint, the Swede Tobias Brink in an Audi RS 3 LMS finished runner-up ahead of his teammate, Andreas Wernersson. In the second race on a wet track, Brink again took the runner-up’s spot, marking his seventh podium finish this year. As a result, Tobias Brink remains runner-up in the standings with a 21-point deficit. Mathematically, Andreas Wernersson in the fourth spot of the standings, with a 38-point gap, still has chances to clinch the title at the finale at Mantorp Park in October, too, because 55 points are yet to be awarded there. In the teams’ classification, Brink Motorsport has meanwhile extended its advantage to 20 points.

Two trophies in endurance race: Team Bonk Motorsport in round six of the VLN Endurance Championship Nürburgring, finished the SP3T class runners-up. Hermann Bock and Michael Bonk shared an Audi RS 3 LMS in the four-hour race. Håkon Schjærin, Atle Gulbrandsen and Kenneth Østvold were on the grid in another Audi RS 3 LMS. The three Norwegians from the Møller Bil Motorsport team claimed position two in the TCR.

Podium at the finale: The best Audi driver at the finale of the TCR Russia was Aleksey Dudukalo. In the first of two sprint races at Sochi, he achieved third place in an Audi RS 3 LMS of the Lukoil Racing Team. The second race was led in the early stage by Klim Gavrilov in an Audi RS 3 LMS from Carville Racing. A drive-through penalty for a daring overtaking maneuver plus another penalty at the finish for exceeding track limits caused the Russian to drop to 16th position. He lodged an appeal and, provisionally ranked in third place of the TCR Russia standings, is the best Audi driver in the 2019 season.

FIA WTCR headed for Asia: The 2019 WTCR – FIA World Touring Car Cup is entering its crucial stage in Asia. The four Audi Sport drivers are traveling with confidence to the seventh of ten events, the WTCR Race of China at Ningbo International Speedpark. Some 200 kilometers south of Shanghai, a challenging circuit with 21 turns and a length of four kilometers awaits the teams. Comtoyou Team Audi Sport is fielding the two Audi RS 3 LMS cars for Frédéric Vervisch and Dutchman Niels Langeveld, who is breaking new ground in Asia. The Belgian Vervisch, with 136 points, is currently the best Audi Sport driver in the standings. Following the 24-hour races in Dubai and at the Nürburgring, he won the 10 Hours of Suzuka as his third major endurance race in an Audi R8 LMS during the nine-week summer break of the FIA WTCR. A year ago, having finished the first race in third position, he stood on the podium at Ningbo. Leopard Racing Team Audi Sport is preparing two other Audi RS 3 LMS cars for the Briton Gordon Shedden and the Frenchman Jean-Karl Vernay. The Scotsman left China last year with a trophy in his baggage which he had won on the circuit of Wuhan that was still used at that time. The Frenchman celebrated a victory at that event, too, and, with a gap of 13 points, is currently ranked directly behind his fellow driver Frédéric Vervisch.