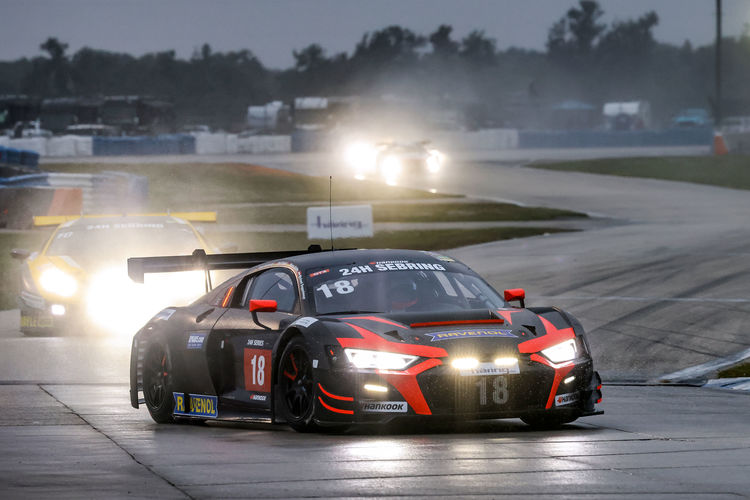 At the season finale of the 24H Series, two teams from Audi Sport customer racing had reason to celebrate. In addition to the overall victory of the Audi R8 LMS at Sebring, the brand also recorded a class win in the TCR classification as well as runner-up titles in several final championship rankings.

Success at Sebring: Team Rutronik Racing by TECE celebrated its first victory in the 24H Series with the Audi R8 LMS in Florida. At the same time, it was the first overall victory this season for an Audi customer team in a round that counts towards the championship after Car Collection Motorsport had won the 6 Hours of Abu Dhabi held outside the regular classification in January. On the famous Sebring circuit, privateers Michael Doppelmayr, Elia Erhart, Swen Herberger and Audi Sport driver Markus Winkelhock shared the cockpit of the Audi R8 LMS. Starting from pole position, Team Rutronik Racing by TECE initially led the 24-hour race for 18 laps in changeable weather. Subsequently, an exciting battle for the top position developed with the Porsche of Team Herberth Motorsport. After three quarters of the race distance, heavy rain forced the race control to interrupt the race. Swen Herberger crossed the finish line after 559 laps with a one-minute and 44-second lead over pursuer Porsche. For Markus Winkelhock, it was the sixth 24-hour overall victory of his racing career after three wins at the Nürburgring and two at Spa. The Audi R8 LMS has already recorded its fourteenth 24-hour overall victory since 2009. In the final 24H Series standings, Rutronik Racing by TECE finished second among the GT3-Am teams, while Michael Doppelmayr and Swen Herberger are third in the GT3-Am drivers standings.

First victory of the season for AC Motorsport: The long-standing Audi customer team AC Motorsport clinched its first victory of the season with the Audi RS 3 LMS at the 24H Series finale at Sebring. Stéphane Perrin and his teammates Mathieu Detry, Rik Breukers and Matthew Taskinen fought a long battle in Florida with the Volkswagen team Autorama Motorsport, which had two cars on the grid. Depending on the race situation, AC Motorsport’s lead grew to three laps or shrank back to 26 seconds as it did during the night after a spin and a technical problem. In the end, the private Audi driver quartet won the TCR class with a one-lap lead and finished a respectable eighth overall in the sports and touring car series. For AC Motorsport, it was the first 24-hour class victory since a corresponding success in Dubai in 2020. In the 24H Series championship standings, the Belgian team scored second place in the TCR team standings, while Stéphane Perrin and Mathieu Detry are second in the TCR drivers standings. With its success in America, the Audi RS 3 LMS clinched a class victory in a 24-hour race for the sixth time.

Audi RS 3 LMS on sales tour: Deliveries of the second-generation Audi RS 3 LMS have begun. Around the Macau Grand Prix, Audi Sport customer racing Asia presented the entry-level touring car model on the penultimate weekend in November at the Fisherman’s Warf entertainment complex right next to the race track. With 13 race cars of the previous generation, Audi was the most popular touring car brand in the starting fields of the city race.