Skip to content
We are using cookies for a better user experience.
06/17/19
Neuburg a. d. Donau
Motorsport

Victories for the Audi R8 LMS at the Nürburgring 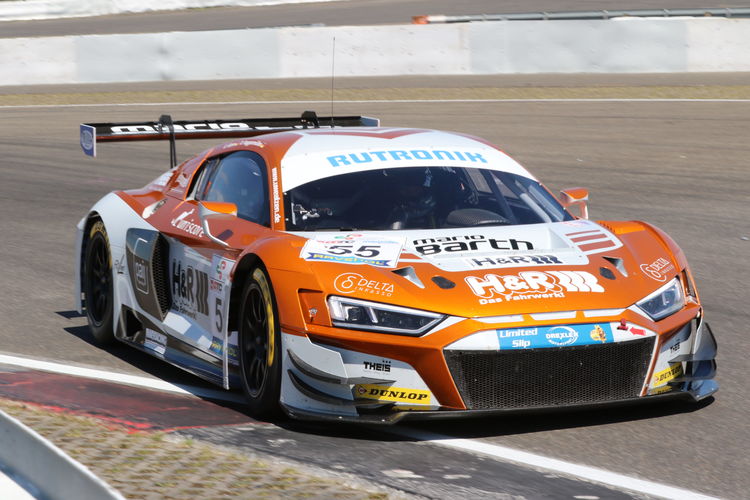 Audi Sport customer racing experienced another good weekend with its customers: The Audi R8 LMS achieved its fifth sprint and second endurance racing victory in the DMV GTC series at the Nürburgring. Plus, the Audi R8 LMS GT4 and the Audi RS 3 LMS clinched victories and further trophies on the weekend.

Strong juniors: The fourth race weekend of the DMV GTC was dominated by several juniors. Simon Reicher won the Dunlop 60 race at the Nürburgring in an Audi R8 LMS. The 19-year-old Austrian single-handedly celebrated his first victory in the 60-minute race with Audi’s Saxon customer racing team Yaco Racing. It was the second victory this season for the Audi R8 LMS in a Dunlop 60 race. Third place went to Vincent Kolb. The 24-year-old driver from Frankfurt, Germany, was at the wheel of an Audi R8 LMS from Phoenix Racing. In the following sprint races, Audi Sport’s customers collected further trophies. Uwe Alzen in an Audi R8 LMS won the first DMV GTC race. For the former pro, this marked the fourth sprint victory, while the Audi R8 LMS has won five of eight races in the club racing series. Simon Reicher completed his excellent weekend in third position in race one and second in race two. In addition, the Spaniard Isaac Tutumlu Lopez with Car Collection Motorsport clinched third place in the second race in another Audi R8 LMS.

Debut for breakthrough development: An Audi R8 LMS provided the base for the first race car without a steering column. Schaeffler Paravan Technologie GmbH & Co KG in collaboration with Phoenix Racing presented the first model of this kind that has been approved by the German Motor Sport Federation (DMSB). Audi Sport driver Markus Winkelhock will be driving the race car in future events of the DMV GTC series. The technology demonstrator will make its debut in the 24-hour race at the Nürburgring: The project partners are going to present the Audi R8 LMS on Friday, June 21, at 4 PM at the Phoenix Shop on the ring°boulevard. A day later, directly before the 24-hour race, the race car will do its first lap on the Nordschleife of the Nürburgring.

Two victories and one second place: Phoenix Racing managed a good home round with the Audi R8 LMS GT4 at the Nürburgring. On the fourth race weekend of the DMV GTC, the Dane Nicolaj Møller Madsen and the Swiss Cédric Freiburghaus delivered a perfect performance in Class 5. Together they dominated their class in the Dunlop 60 race and achieved a 21.9-second advantage during one hour of racing including a driver change. Afterwards, they raced individually: following second place by Møller Madsen in the first sprint race, Freiburghaus finished the weekend with a victory in the second sprint ahead of three other rivals.

Second victory this season in Scandinavia: Andreas Wernersson improved his good form in the TCR Scandinavia once again on the third race weekend. The junior from Team Brink Motorsport posted the best time in qualifying for the first time this season, scoring five points for pole. He went on to win the first race at Skellefteå in an Audi RS 3 LMS in a photo finish with an advantage of 22 thousandths of a second ahead of Robert Dahlgren. It was his second victory this season. In the second race, Wernersson dropped to last place following an off-track excursion but fought back to third position. On his best race weekend so far, the Audi privateer scored 45 points, thus moving up one position to the second spot in the standings. Six points separate him from leader of the standings Robert Dahlgren. Team Brink Motorsport continues to sit in the top spot of the teams’ classification.

First victory this season in Brazil: Henry Visconde achieved his first class win this season in the third round of the Endurance Brasil racing series. Last year’s division winner shared the Audi RS 3 LMS with Tiel de Andrade and Julio Martini. After three hours of racing, they won their class on the circuit of Santo Cruz do Sul in the south of Brazil.

Second place at Zhuhai: Filipe Souza just barely missed victory in the second round of the Circuit Hero One Series in China. The race driver from Macau was leading in an Audi RS 3 LMS from pole position for 13 laps. However, a slow puncture did not leave him any chance two laps before the race ended. He ultimately crossed the finish line in second position.

Podium at Monza: The Italian customer team BF Motorsport on the fourth race weekend of the Coppa Italia scored a podium finish. Edoardo Barbolini in the first of two sprints on the Monza circuit finished the TCR classification runner-up in an Audi RS 3 LMS as the best entrant in the TCR DSG class.

WTCR – FIA World Touring Car Cup: Next weekend the four Audi drivers Niels Langeveld, Gordon Shedden, Jean-Karl Vernay and Frédéric Vervisch at the 2019 season’s midpoint will be racing at the Nürburgring, on the longest track on the calendar. The 25.378-kilometer combination of the Nordschleife and the Grand Prix circuit suited the Audi RS 3 LMS well last year. Vervisch achieved a second and a third place in the Eifel, which marked the beginning of a series of seven podium results during the course of eight race weekends. This year, the Belgian is contesting the dual program of the FIA WTCR in an Audi RS 3 LMS and the 24-hour race in an Audi R8 LMS again. In addition to two race cars each fielded by Comtoyou Team Audi Sport and the Leopard Racing Team Audi Sport, the FIA WTCR grid will include a fifth Audi RS 3 LMS for the first time this year. The Finn Antti Buri, currently the leader of the ADAC TCR Germany standings, will participate in the three races as a wild card entrant with Team AS Motorsport.