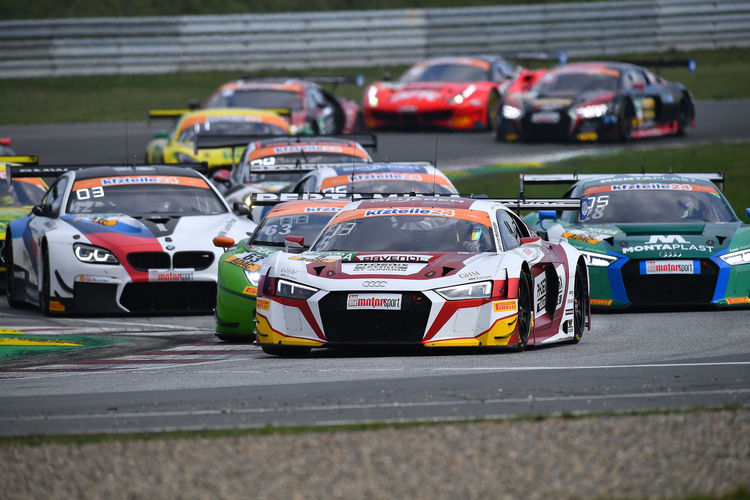 Strong start to the season at Oschersleben: The 2018 ADAC GT Masters began with a one-two win for Audi Sport’s customers. Austrian Max Hofer, who contested the 2016 Audi Sport TT Cup, and his British teammate Philip Ellis, who decided this one-make cup in his favor last year, were the first winners this season with Phoenix Racing. Trailing them by just 2.3 seconds, a second Audi R8 LMS crossed the finish line: South African brothers Sheldon and Kelvin van der Linde clinched second place for Montaplast by Land-Motorsport. As a result, Ellis and Hofer, after the first race weekend, are two of four drivers in the top spot of the standings tied on points. Likewise, Phoenix Racing is one of two squads sharing position one in the teams’ standings.

Two victories at Hockenheim: In the DMV GTC season opener, the customers of Audi Sport made a strong showing. Land-Motorsport won the first race at Hockenheim with “Ronny C’Rock” in an Audi R8 LMS. Third place was secured by Carrie Schreiner from Team HCB-Rutronik Racing. The up-and-coming lady driver attracted everyone’s attention in race two when she clinched the lead and kept it up until the finish. In addition, together with Fabian Plentz, she won the Dunlop 60 race. Third position in this race went to HCB-Rutronik Racing as well with Fabian Plentz and Tommy Tulpe in another Audi R8 LMS.

Trophy in Malaysia: In the opening event of the Blancpain GT Series Asia, Team Absolute Racing won a trophy with the Audi R8 LMS. The Chinese Anthony Liu and his Australian teammate Josh Burdon clinched second place on the circuit at Sepang as the best of six Audi driver squads.

Second place for Phoenix Racing on home soil: Ernst Moser’s team in the qualification race for the 24-hour race achieved second place in the SP10 class for GT4 race cars. Milan Dontje, Nicolaj Møller Madsen and Jörg Viebahn in the Audi R8 LMS GT4 after six hours of racing had to admit defeat by only 14.485 seconds. A second Audi R8 LMS GT4 competed in the SP-X class and with Christian Abt, Alexander Mies and Nicolaj Møller Madsen took second place in this classification as well.

Three trophies at Hockenheim: For the first time, two teams relied on the Audi R8 LMS GT4 in the DMV GTC club sport series. Jean-Luc Weidt achieved third place in his class in both sprint races. Together with Dietmar Haggenmüller the young driver took third position in the Dunlop 60 race as well.

Success at the Nürburgring: Bonk Motorsport secured a class win on the Nordschleife for Audi Sport customer racing. In the qualification race for the 24-hour race, privateer drivers Hermann Bock/Max Partl/Rainer Partl won the TCR class in an Audi RS 3 LMS with an advantage of 1m 20s ahead of the Hyundai works team.

Victorious start to the season in Russia: In the TCR Russia, Klim Gavrilov scored a spectacular victory at Fort Grozny. The up-and-coming driver from Team Lukoil Racing in his Audi RS 3 LMS overtook last year’s champion Dmitri Bragyn in the early stage and went on to lead the race before a driving mistake caused him to drop to second position. When race leader Kirill Ladygin encountered tire problems Gavrilov took the lead again and won with a 1.9-second advantage. In race two, Aleksey Dudukalo in second place was the best Audi customer racing campaigner.

Three victories for Kevin Arnold: The driver who was promoted from the Audi Sport TT Cup started the new season in the DMV GTC with three class victories. In his home round at Hockenheim, the 18-year-old budding driver from Aichelau won both sprints in the Audi RS 3 LMS and his class in the Dunlop 60 race, outperforming even nominally more powerful GT4 race cars. As a result, Arnold is leading the overall classification after the first of eight events.

Good start to the season for Racing One: Niels Langeveld from Team Racing One started the new season in the ADAC TCR Germany with two podium finishes. Placing second in round one at Oschersleben, he had to admit defeat by only 1.2 seconds. In a photo finish in race two, he drove his Audi RS 3 LMS to third place, trailing the winner by merely 0.839 seconds. Following the first of seven race weekends, the Dutch privateer driver is runner-up in the standings with a deficit of just two points to the front runner.