Skip to content
We are using cookies for a better user experience.
05/20/19
Neuburg a. d. Donau
Sports

Victories for all three models from Audi Sport customer racing

Links
{{ activeItem() }}
Twitter
07/11/20
SOUND ON: The Audi RS 5 DTM testing at @circuitspa. Have a great weekend! &gt;&gt; https://t.co/RoNVUt6n8i… https://t.co/VO6wvZw7yY
07/10/20
“All my life, I’ve dreamed about sitting in such a race car one day.” Mike Rockenfeller looking back on the 2012 Au… https://t.co/Hk47Riv1XG
07/10/20
Destination ADAC @gtmasters 2020. Our customers also joined us for testing at the @Lausitzring_de this week:… https://t.co/IdkSZCHzwf
07/10/20
More testing at the @Lausitzring_de: Audi Sport customer racing on track with the Audi R8 LMS this week, getting re… https://t.co/pNfnnWiFmF
Audi Sport on Twitter
{{ activeItem() }}
Facebook
06/30/20
10 races with thrills, spills, banter and more: Looking back on the first season of the RCCO #RaceHome charity racing series with our DTM factory drivers competing for a good cause. #RaceHome #AudiTogether #etron #StayHome #PerformanceIsAnAttitude #RaceAtHome
06/29/20
From the virtual RCCO #RaceHome season finale, to picking up his new ride and racing at the Green Hell – a fun week for Nico Mueller in his latest #DriversDiary. >> audi.com/DTM >> audi.com/GT3 #RaceHome #AudiTogether #etron #StayHome #PerformanceIsAnAttitude #RaceAtHome -------------------- Audi RS 6 Avant: Combined fuel consumption in l/100 km: 11,7 (20.1) – 11,5 (20.5); combined CO2 emissions in g/km: 268 (431.3) – 263 (423.3); Information on fuel consumption and CO2 emissions as well as efficiency classes in ranges depending on the tires and alloy wheel rims used. // www.audi.com/dat
06/25/20
“That was the car I really loved to drive. I felt really confident in the new A4.” Together with Mattias Ekström, we’re looking back on the era of the Audi A4 DTM – the car that scored 5 DTM drivers’ titles for us. >> audi.com/DTM #PerformanceIsAnAttitude #AudiTogether
06/24/20
The first season of the RCCO #RaceHome charity racing series is in the books. Check out our race highlights and broadcast from WeatherTech Raceway Laguna Seca: >> bit.ly/2Vb03ww #RaceHome #AudiTogether #etron #StayHome #PerformanceIsAnAttitude #RaceAtHome
Audi Sport on Facebook 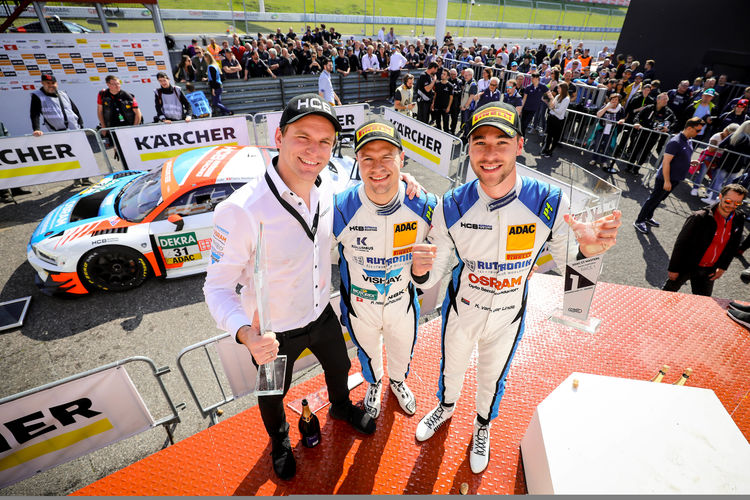 All three race cars from the current model range in the customer’s hand came out on top in worldwide motorsport competitions this past racing weekend.

First victory this season and lead of the standings: The new evolution of the Audi R8 LMS achieved its first victory in the ADAC GT Masters this season. Team HCB-Rutronik Racing, which is just making its debut this season in Germany’s most challenging GT3 racing series, won the first race in the second round at Most. Audi Sport driver Kelvin van der Linde from South Africa and Swiss Patric Niederhauser had started from pole position and went on to score victory with a four-second advantage after one hour of racing. As a result, they also took the lead of the standings, now ranking 17 points ahead of their closest rivals. HCB-Rutronik Racing now leads the teams’ classification as well.

Audi unbeaten in Eset V4 Cup: The Audi R8 LMS remains the measure of all things in the Central European Eset V4 Cup. In round two at the Red Bull Ring, the Pole Mateusz Lisowski from Olimp Racing won both sprint events and achieved second place in the endurance race. The Czech Richard Chlad jr. was unbeatable on the endurance racing distance and clinched second place in the first sprint in the proven Audi R8 LMS ultra.

Second place in challenging competition: Audi Sport Italia contests the GT sprint series at home but now put in a one-off performance at round two of the endurance classification. At Misano, Charles Weerts drove the start in the Audi R8 LMS and advanced from seventh to second position on a wet track. Then the Belgian handed the car over to Norman Nato. The Frenchman lost a position during a pit stop but reclaimed the lost spot on the race track. 18-year-old Charles Weerts took over the GT3 sports car for the final stint, pulled clear of his immediate rival and, after three hours of racing, celebrated a deserved second place together with his teammate, ahead of clearly more experienced entrants such as former Formula One drivers Giancarlo Fisichella and Jacques Villeneuve.

First place in China: In the China Endurance Championship season opener at Ningbo, the Audi R8 LMS of the 69 Racing team with drivers Jeffrey Zee, Zhang Zhi Qiang and Wang Han won the GRC class after two separate halves of the race held over a total of 280 minutes.

Two victories at season opener: The Canadian Touring Car Championship began with two victories of the Audi R8 LMS GT4. On the challenging circuit at Mosport, Parker Thompson from Team Speedstar Motorsport scored overall victory in both races and thus twice in the GT Sport class too.

With compliments from a local restaurateur: In the city race at Pau in Southern France, the Audi R8 LMS GT4 clinched its first two victories this season in the GT4 France racing season. Team IMSA Performance achieved a sensational feat in the process: Michael Blanchemain/Steven Palette started from position 18 on the narrow circuit. Faced with an uncertain weather forecast, they obtained advice from a local restaurateur who had closed his terrace to be on the safe side because he expected heavy rain. Consequently, the team opted for rain tires and drove the Audi R8 LMS GT4 to victory in the race on the late Saturday night. A day later, the title defenders from Saintéloc Racing celebrated their first victory this season. Gregory Guilvert dropped to second position at the start but his teammate, Fabien Michal, subsequently demonstrated all his skills in overtaking previously lapped rivals. With their first victory, Guilvert/Michal took the lead of the standings with an eight-point advantage.

Second place in the Eifel: The Giti Tire Motorsport team achieved a podium finish in the qualification race for the 24-hour race. The Chinese Xiaole and Li Fei shared an Audi R8 LMS GT4 with Sunny Wong and Andy Yan from Hong Kong and crossed the finish line in second place of the SP8 classification.

Second victory this season: Antti Buri returned from the second race weekend of the ADAC TCR Germany with his second winner’s trophy. On the circuit at Most in the Czech Republic, the Finn in the Audi RS 3 LMS, as previously at Oschersleben, won the second race of the event. The 30-year-old privateer driver prevailed against Honda driver Bradley Burns with a spectacular overtaking maneuver on the last lap.

Two Audi victories in the TCR Russia: In the second round of the TCR Russia at Nizhny Novgorod, the Audi RS 3 LMS was the car to be beaten. In the first race, Klim Gavrilov with the VRC team started from pole position and went on to score his first victory this season. Victory in the second race went to Aleksej Dudukalo from Lukoil Racing Team, who, as a result, is now in second position of the standings. With 20 entrants, the TCR Russia is a particularly strong national TCR racing series. Audi is represented in the field with six RS 3 LMS cars entered by different customers.

One-two in China: Guangdong Racing in the China Endurance Championship season opener at Ningbo scored a one-two result with the Audi RS 3 LMS in the touring car class. Drivers Xie Sen and Wang Jie finished in the top spot ahead of their teammates, Sun Jun Long, Liang Zhi Wie and Zhou Bao Long.

Second place in season opener: The inaugural season of the TCR Japan sprint racing series began with a customer success for Audi Sport. In round one on the circuit at Autopolis, Takuro Shinohara in second place on a wet track had to admit defeat by only one second. His Audi RS 3 LMS is fielded by the long-standing Japanese Audi customer team Hitotsuyama Racing.

Position two at the Nürburgring: The Bonk Motorsport customer team celebrated a success in the qualification race for the Nürburgring 24 Hours. Hermann Bock and Max Partl finished runners-up in the SP3T class. The Audi RS 3 LMS of the squad based in Münster was the fastest front-wheel drive race car in this class.

Podium finish at Misano: Enrico Bettera as the best Audi privateer driver clinched a podium finish in the second round of the TCR Italy. The Italian Gentleman driver as the runner-up in the first race had to admit defeat in his Audi RS 3 LMS by only 1.2 seconds.

A visit to Formula One at School: The “Formula One at School” technology competition visited the “Autostadt Wolfsburg” in the middle of May. The event also gave the 11- to 19-year-old participants the opportunity to admire a real race car – the Audi R8 LMS GT4, the car fielded in the Audi Sport Seyffarth R8 LMS Cup. The students themselves had developed miniature race cars on the computer, built and entered them in racing. The best student teams can look forward to a trip to the world championship in Abu Dhabi. Two other promising teams received an invitation in Wolfsburg to visit a race weekend in the Audi Sport Seyffarth R8 LMS Cup.