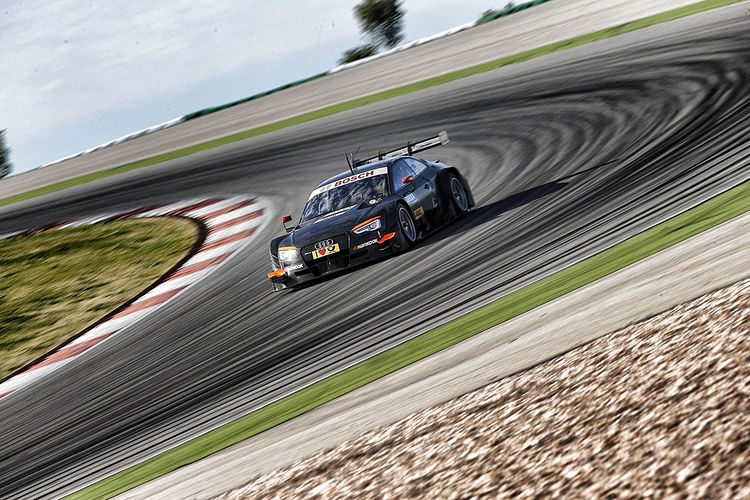 Audi Sport spent three days of testing the Audi RS 5 DTM on the race track at Portimão (Portugal), gathering valuable data for the 2015 DTM season that starts at the beginning of May in the process.

In brilliant sunshine and spring-like temperatures of about 20 degrees centigrade, the Audi drivers Mattias Ekström (S), Nico Müller (CH) and Mike Rockenfeller (D) covered a total of about 3,600 kilometers in two test cars of Audi Sport. “This test was primarily focused on further optimizing the RS 5 DTM and to work out a basic set-up for the 2015 season that our teams can build on in the next two tests at Estoril and Oschersleben,” says Dieter Gass, Head of DTM at Audi Sport in summing up the test.

The lion’s share of the testing work in Portugal was handled by the two DTM Champions Mattias Ekström and Mike Rockenfeller. But youngster Nico Müller got to drive on the demanding race track on the Algarve coast as well. “We only have few testing opportunities in the DTM, so the laps at Portimão were all the more valuable for me,” says the Swiss who in 2015 is tackling his second DTM season with Audi. “In addition, I can always learn something else while listening in on the radio communications of the other drivers.”

“In the DTM, the devil is in the detail,” says Mike Rockenfeller, the 2013 DTM Champion, who knows from experience. “Even though the technology of the cars has been frozen by the regulations the work on details never stops. Plus, it never hurts to do some kilometers in the race car. Even after so many years in the DTM it helps to train your ability to drive by the seat of your pants and to stay in practice.”

“A test like this is more strenuous than a race weekend because you drive a lot more,” says Mattias Ekström, the 2004 and 2007 DTM Champion. “You try out a lot of different things and develop a good feel for what works well and what doesn’t work so well. This knowledge is very important with a view towards the coming season.”

At Estoril from March 25 to 27, the DTM will again be testing in Portugal. At Oschersleben from April 14 to 16, another test is on the agenda before the new season starts on the first weekend in May. Tickets for the DTM festival at Hockenheim that will feature the new Audi Sport TT Cup and the FIA World Rallycross Championship (World RX) as well are available at www.audi-motorsport.com.