Skip to content
We are using cookies for a better user experience.
09/02/19
Neuburg a. d. Donau
Sports

Two victories for the Audi R8 LMS in Thailand 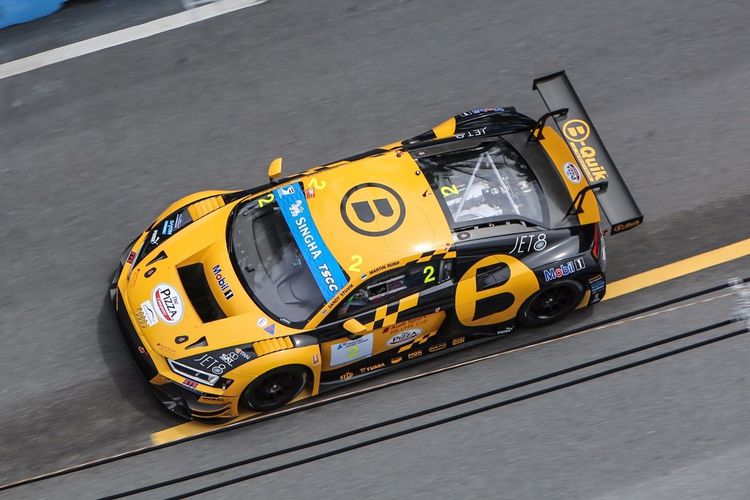 Following two victories in the Thailand Super Series, Audi Sport customer racing with Team B-Quik Racing for the first time is setting its sights on the title. At the same time, the Audi RS 3 LMS in customers’ hands has won sprint events and endurance races on three continents.

Two victories and lead of the standings in Thailand: Audi’s customer team B-Quik Racing on the third weekend of the Thailand Super Series won two spectacular races with the Audi R8 LMS. In the Bangsaen Grand Prix held close to the beach of the Gulf of Thailand, Sandy Stuvik/Martin Rump battled their way to victory in difficult conditions in race one. Having started from third on the grid, the driver pairing due to its FIA Silver Ranking had to pit 22 seconds longer than their Pro Am competitors and even 52 seconds longer than the all-amateur squads. In the first half of the race, Stuvik achieved a 6.7-second advantage while Rump rejoined the race after the stop in third position. He managed to overtake two rivals and went on to score victory. Their teammates, Henk Kiks and Daniel Bilski, retired after a puncture with subsequent wall contact but in the second race made perfect use of their chances. Initially, Kiks dropped to ninth place but a perfectly orchestrated pit stop during a safety car period helped the Audi R8 LMS take the lead, causing Bilski to win the race with a 1.5-second advantage. Following their third victory this season, Kiks/Bilski are leading the series before the finale at Buriram in October.

Two podiums at the Nürburgring: In round four of the Blancpain GT World Challenge Europe, Saintéloc Racing was the strongest Audi Sport customer team. In the first of two races at the Nürburgring, Christopher Haase in an Audi R8 LMS fought a thrilling battle with two Lamborghini drivers in the final stage. Running in second place some of the time, he ultimately crossed the finish line in third position ahead of three other Audi cars with a gap of just one tenth of a second to the car in front of him. In the second race, the German Audi Sport driver and his French teammate Simon Gachet again clinched a trophy. Gachet crossed the finish line in second position and thus helped the French team clinch its third consecutive podium in this racing series. As the best Audi driver team Gachet/Haase are sitting in fourth position of the overall classification before the finale.

Class success at Shanghai: Team TKR in round three of the China Endurance Championship celebrated a class victory. Chen Bohan/Xie Peihan/Jing Zefeng/Su Yanming won the GTC class in an Audi R8 LMS at Shanghai after 4 hours and 40 minutes of racing.

Second place at Watkins Glen: Team Rearden Racing impressed with a strong performance on the sixth race weekend of the Pirelli GT4 America SprintX at Watkins Glen. In a field of 23 entrants, Vesko Kozarov/Jeff Burton in the first of two races finished runners-up in an Audi R8 LMS GT4. Consequently, as previously in the second event in Virginia, they scored the full number of points in the AM classification for the third time.

Rogalski extends lead of the standings: Robin Rogalski only needed two third places on the fifth race weekend of the Audi Sport Seyffarth R8 LMS Cup to slightly extend his lead of the standings. The German had traveled to Most with a bolster of 16 points and returned with a 17-point advantage. He showed his strongest performance in the first round when he claimed a podium finish after starting from sixth on the grid. Like a week earlier at the Lausitzring, rookie Maximilian Paul again won both races on the Czech race track. His best immediate rival in the first heat was Tim Reiter, who stood on the podium for the first time. In the second race, Jedrzej Szczesniak from Poland took second position and thus kept the runner-up’s spot in the standings in front of the Swiss Rudolf Rhyn. Szczesniak benefited from an error on Reiter’s part because the 20-year-old student thought the race had ended one lap before the finish.

Two victories at Watkins Glen: Michael McCann Jr. managed an impeccable weekend in the TC America. The American with Team McCann Racing won both sprint races in an Audi RS 3 LMS with more than a two-second advantage in the sixth event at Watkins Glen. In the TCR Cup class, one driver was dominant throughout the weekend as well: Canadian Travis Hill in an Audi RS 3 LMS with a dual-clutch transmission scored class victory in both races for TWOth Autosport.

Third victory for Audi in TCR Italy: On the fifth race weekend of the TCR Italy an Audi driver won a race for the third time. Enrico Bettera, who had previously stood on the top step of the podium at the opening event at Monza, was again unbeatable in the first race at Imola in an Audi RS 3 LMS. During the course of 14 laps, he pulled clear of his closest rival by 3.4 seconds. In the standings, he is ranked in fourth position in the 23-strong field as the best Audi driver. In the second race, Jacopo Guidetti in another Audi RS 3 LMS achieved third position.

Second victory in the TCR DSG Endurance: Ermanno Dionisio and Giacomo Barri won a round of the TCR DSG Endurance for the second time. Following their success at Vallelunga in May, the driver pairing from BF Motorsport prevailed again at Imola, with a one-second advantage after two hours of racing. In the standings, the two drivers as runners-up have reduced their gap to Alessandro and Giovanni Altoè by eight to 18 points before the finale. At the same time, Dionisio before the finale at Mugello in October is leading the Gentleman classification of the endurance racing series.

Commanding performance in China: The Audi RS 3 LMS dominated its class in the third round of the China Endurance Championship. Team New Faster after 93 race laps locked out the podium. The victorious driver trio of Sun Junlong/Liang Zhiwei/Zou Balong won the endurance race at Shanghai with a one-lap advantage.

Russell Ingall on podium again: In the TCR Australia, Russell Ingall continued his string of podium results in an Audi RS 3 LMS. The 55-year-old touring car expert, who on the fourth race weekend had clinched a third and two second places, secured another trophy in the fifth event at Winton. In the third sprint on the circuit in the South Australian state of Victoria, he crossed the finish line for the Melbourne Performance Centre in third position.