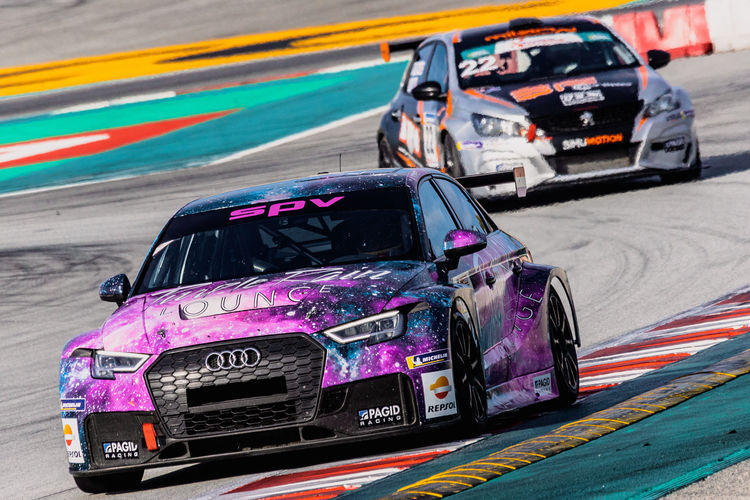 TCR title in Spain: Mirco van Nostrum/Alvaro Fontes won the TCR title for the first time in the Audi RS 3 LMS at the Campeonato de España de Resistencia finale. Second place in the two-hour race at Barcelona was enough for the Dutchman and his Spanish teammate to win the classification with a 73.2-point advantage. The season’s tally of the two Audi privateer drivers in the Spanish endurance racing series: two victories, five second places and one third place spread over five race weekends. A total of twelve drivers collected points in the TCR standings over the course of the season. Team CDS Engineering’s title once again extends the record of the proven Audi RS 3 LMS: To date, the first generation of the entry-level touring car launched in 2017 has clinched a total of 66 titles worldwide in various driver and class rankings.

Runner-up in North America: Audi’s customer teams managed a decent end to the season in the TCR classification of the IMSA Michelin Pilot Challenge. Thanks to the performance of its teams, Audi clinched the runner-up title in the manufacturers standings with the RS 3 LMS behind Hyundai and ahead of Honda and Alfa Romeo. Chris Miller/Mikey Taylor had contributed the lion’s share with their victories at Daytona and Virginia and finished seventh in the standings. Jon Morley/Gavin Ernstone had contributed another victory to Audi Sport’s tally at Sebring. At the finale at Road Atlanta, six customer teams – Road Shagger Racing, AOA Racing, Rockwell Autosport Development, New German Performance, TWOth Autosport/Bestline AutoTech and Unitronic JDC-Miller MotorSports – had entered an RS 3 LMS each. Ernstone/Morley achieved sixth place in a fiercely contested two-hour race with a gap of just five seconds. Audi was the brand with the second highest number of customers in the field of 16 competitors at Road Atlanta.

Instructive endurance race: Audi driving experience Japan contested the finale of the Super Taikyu Series with an Audi RS 3 LMS. Successful graduates of the driving experience courses have already entered racing in this way in the past. This time Daisuke Imamura and Yuuki Ano shared the cockpit with Hideki Nakahara. At the three-hour race in Okayama, the driver trio achieved second place in the TCR class.

Class title on the Iberian peninsula: Pierre Arraou has won the C2 class in the 2021 Campeonato de España de Resistencia. The Frenchman clinched seven class victories and two second places in the Iberian sports and touring car series in his Audi R8 LMS GT4 over the course of the season. For Audi, this is already the second class title in this endurance championship after David Serban secured a title in 2019 with an Audi R8 LMS GT4 as well.

Clear victory in French club racing: Team Fullmotorsport impressively prevailed in its class at the finale of the Trophée Tourisme Endurance with the Audi R8 LMS GT4. Christophe Hamon, Michael Blanchemain and Vincent Saphores won the T5 class contested by eight rivals at the six-hour race at Le Mans with a seven-lap lead. Hamon and Blanchemain are very familiar with the production-based GT4 sports car from Audi because they have already won the amateur classification of the GT4 European Series this season.

Two podium results in South Africa: Marius Jackson earned two trophies at the sixth round of the G&H Transport Extreme Supercars Series in South Africa. The privateer driver finished second in his class in the MJR Motorsport Audi R8 LMS GT4 on the Zwartkops circuit in both races.