Skip to content
Please participate in our survey and help us improve the Audi MediaCenter. Thank you!
Go to survey
01/11/20
Dubai/Neuburg a. d. Donau
Motorsport 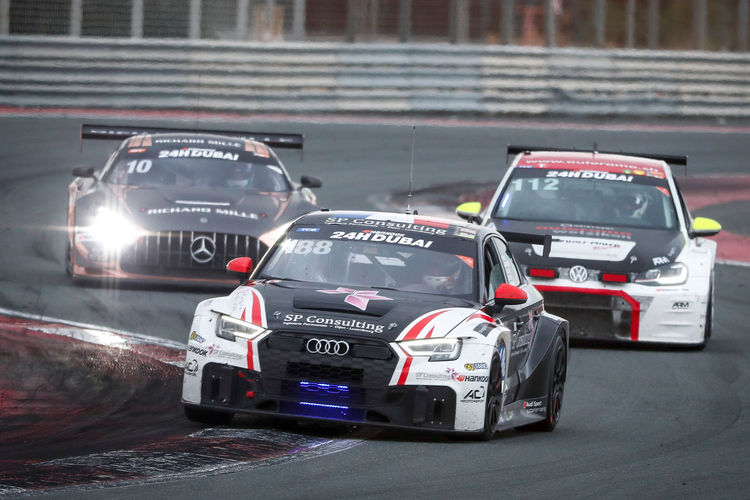 Heavy rain and a flooded track meant that the organizers of the Dubai 24 Hours had to end the event early with the red flag after 7:17 hours of racing and 168 driven laps. At this time, Team Car Collection Motorsport with the Audi R8 LMS was in the overall runner-up’s spot while Team MS7 by WRT was in position three. Team AC Motorsport claimed victory in the TCR classification. The Belgian squad caused the Audi RS 3 LMS to score its second success in class in Dubai.

Following last year’s victory in the Dubai 24 Hours, Audi was absolutely competitive once again in the traditional season opener of the 24H Series in the desert. The biggest success was achieved by an Audi Sport customer team in the TCR class that was well-filled with 13 entrants. After its maiden victory in Dubai in 2017, the Audi RS 3 LMS has now won this classification once again, with Arnaud Quédé’s AC Motorsport team from Belgium prevailing this time. The driver pairing of Tom Boonen/Gilles Magnus/Stéphane Perrin/Vincent Radermecker/Matthew Taskinen had started in its class from fifth position and achieved a one-lap advantage over the course of 155 laps. For the former bicycle racer and road racing world champion Tom Boonen from Belgium, this marked his first major success on four wheels, and the fourth class victory for Audi Sport’s entry-level touring car in a 24-hour race. “Sincere congratulations to our long-standing customer team on clinching this victory. AC Motorsport was first-class once again,” said Chris Reinke, Head of Audi Sport customer racing. “We were doing well in the overall classification, too. Unfortunately, in the end, we were lacking a little fortune in these unusual conditions. Otherwise the title defense with a third victory would no doubt have been possible.”

In the overall classification, three different Audi R8 LMS were the front runners once at various points in time. Initially, Swiss privateer Rolf Ineichen led the competition for WRT in car number 31 on the fourth lap and later once more on lap 37. Number 88 from Car Collection Motorsport was leading the field twice with two Audi Sport drivers, respectively – initially, for one lap with Markus Winkelhock, and subsequently for seven laps straight with Christopher Haase. Finally, Team MS7 by WRT with Dutchman Michael Vergers in car number 7 was in the top spot between the 89th and 106th lap.

When the race was red flagged, Car Collection Motorsport with last year’s winners Rik Breukers, Christopher Haase, Dimitri Parhofer and this year’s teammates Mike David Ortmann and Markus Winkelhock were in second position, followed by MS7 by WRT with Rik Breukers/Christopher Mies/Mohammed Saud Fahad Al Saud/Dries Vanthoor/Michael Vergers. Two other Audi R8 LMS cars ultimately claimed a spot in the top ten of the 65 entrants that had started the race: Team WRT with car number 31 and drivers Mirko Bortolotti/Mark Ineichen/Rolf Ineichen/Kelvin van der Linde took fifth place while Attempto Racing with car number 99 and drivers Luc Braams/Max Braams/Mattia Drudi/Duncan Huisman/Nicolas Schöll fought back from the 17th spot on the grid to ninth position. The Gentleman driver team of Gustav Edelhoff/Elmar Grimm/Dr. Johannes Kirchhoff/Ingo Vogler with Car Collection Motorsport in another Audi R8 LMS improved from ninth on the grid in the Am class to third in this class and eleventh overall.