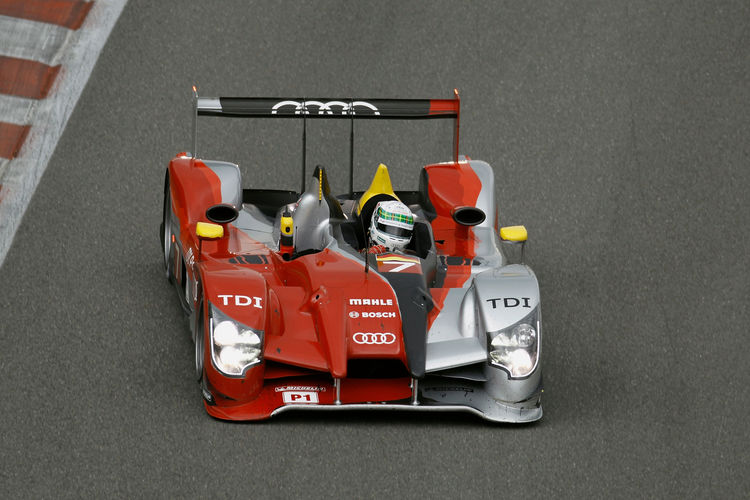 As expected the weather played a decisive role during the Le Mans dress rehearsal at Spa-Francorchamps (Belgium). Rain just before the end of the race cost Audi drivers Dindo Capello, Tom Kristensen and Allan McNish any chance of victory.

During the turbulent 1000 kilometer race, which had to be suspended for almost 40 minutes due to a power cut, a rain shower during the opening stages guaranteed extremely difficult conditions. During the formation lap André Lotterer spun off the slippery circuit. The necessary repairs threw Lotterer, Marcel Fässler and Benoît Treluyer hopelessly back down the running order.

Due to the fact that the three Audi R15 TDI cars started at Spa-Francorchamps in full Le Mans trim and therefore with very little downforce, Allan McNish and Timo Bernhard also struggled to keep their car on the cold and damp circuit during the opening stages.

In dry conditions the Audi drivers could make up lost ground. Thanks to excellent strategy and consistently fast lap times Dindo Capello, Tom Kristensen and Allan McNish even led the race for many laps in the Audi R15 TDI with start number 7.

Timo Bernhard, Romain Dumas and Mike Rockenfeller also fought among the leaders. However, they lost time twice behind the safety car and any chance of a podium finish after having to queue at the pit exit for two minutes after the lights had incorrectly been switched to red for too long.

As a result, Audi Sport Team Joest's hopes rested on Dindo Capello, Tom Kristensen and Allan McNish who had already completed their final refueling stop during a caution period and ran second within striking distance of the leading Peugeot 908. The decision to switch to intermediates as it started to rain 20 minutes before the end of the race did not, however, pay off. Because the track dried out again Kristensen had to give best to the slick shod Peugeot of Stéphane Sarrazin and settle for third place.

Dr. Wolfgang Ullrich (Head of Audi Motorsport): “The result is a little disappointing since we were still in a position to win the race 20 minutes before the finish. Due to the information we had we decided to change to intermediate tires as it started to rain harder – for safety reasons, but also because we had made the correct decision at this moment in time with the weather forecast we had. Unfortunately it immediately stopped raining, and then we knew that the decision was false. Nevertheless, the race was very good for the team. We were faced with many difficult decisions throughout the race. It was good that the team could gel here for Le Mans. With an eye on Le Mans we drove with very little downforce and were nevertheless competitive. We'll certainly be able to make use of all the information we gathered at the 24-hours in June.”

Dindo Capello (Audi R15 TDI #7): “Our problem was the weather, which made our race quite difficult. Because we drove with so little downforce the car was extremely difficult to drive on slicks in the rain, which is why we had to switch to intermediates at the end. We had no other choice. If it had continued to rain we would certainly have finished second. In general our car was really good in Le Mans trim. We were faster on the straights, could fight with the Peugeots and even spent some time leading. We only lost time in the medium speed corners.”

Tom Kristensen (Audi R15 TDI #7): “That was a great race. Many spectacular things happened. When I was in the car at the finish it started to drizzle and the safety car was deployed after an accident. At the beginning we saw that we lose a lot of time under such conditions. Which is why it was in principle the correct choice to change to intermediates. We were very quick and could catch up. Unfortunately however the track was dry again 15 minutes before the race finished, in this respect it was, with hindsight, the wrong decision. However, we are all racers and want to win. Instead we dropped back to third place.”

Allan McNish (Audi R15 TDI #7): “It was extremely difficult on slicks because of the rain that started just before the start. The tires didn't have grip or temperature. It took ages before you could develop any kind of feeling for the car. In principle my stints were good. The team had a good strategy which took us into the lead. The rain at the end didn't help us because you need a lot of downforce in such conditions – which you don't have with the Le Mans aero trim. The wrong tires cost us second place at the end. However, the team should be confident as far as Le Mans is concerned.”

Timo Bernhard (Audi R15 TDI #9): “That was an eventful race. I had however hoped for better weather on my premiere in the LMS. The drizzle at the start made things extremely difficult. I drove rather conservatively because we wanted to reach the finish. This was absolutely the right chioce. Before the interruption we were running in third or fourth place. We were able to fight at the front, which was great. However, after the restart we lost two minutes at the red lights at the pit exit. This was a great shame as it threw us back to fifth place.”

Romain Dumas (Audi R15 TDI #9): “That was a strange race. Unfortunately, immediately after the interruption due to the power cut we had to come into the pits to refuel. I had to wait for two minutes at the red lights at the pit exit – I really don't know why. This cost us the race. The good thing is that all three cars ran reliably. My car was good, I could lap very quickly. This gives us hope for Le Mans.”

Mike Rockenfeller (Audi R15 TDI #9): “That was a chaotic race with the power cut and the race interruption associated with this. Unfortunately, our number 9 car lost a lot of time during the yellow periods because we were always behind the second safety car. After the restart we lost a huge amount of time. I drove on intermediates at the end and was running well when the circuit was half wet. As a whole I'm very satisfied with our performance and in a positive frame of mind for Le Mans. We knew that it would be very difficult for us here with the configuration of our car.”

Marcel Fässler (Audi R15 TDI #8): “My race was relatively short. I only drove a single stint, which proved to be relatively difficult. It had started to rain in places. I stayed out on slicks although the car was very difficult to drive in some sections. Nevertheless, I was able to keep the car on the circuit, in this respect it was the correct decision not to change the tires.”

André Lotterer (Audi R15 TDI #8): “On the warm-up lap I was totally surprised by just how difficult the condition were. The tires were cold and there was some drizzle. It was like driving on ice. It's hard to imagine. I'm really sorry for the team. It's a shame that I had to spend my first race in such a way. It certainly won't happen to me again. I'll chalk that one down to experience.”

Benoît Treluyer (Audi R15 TDI #8): “That wasn't an easy race. There was a huge amount of traffic, and this presents a particularly difficult problem at Spa. The car wasn't perfect after the accident, the steering wheel was not straight ahead. Nevertheless, it was quick. During the first stint I had a problem because the flat bottom was damaged – possibly the result of touching a GT car. As a result I was short of downforce. I enjoyed the second stint. I was fast even though I took no risks in traffic. We brought the car home and learnt a great deal. We were here to practice under race conditions. We did this successfully and are now ready for Le Mans.”

Ralf Jüttner (Technical Director Audi Sport Team Joest): “It goes without saying that we are all a little sad since we lost second place in spite of an excellent team performance just before the finish. We reacted correctly from the tactical point of view up to the final yellow period and called in the cars. The Peugeots stayed out and would have had to refuel under 'green'. If it had stayed dry we could have won, and if it had rained a little more we could also have won. However, exactly that happened that should not have happened. So, we were only third. In general we performed as we expected. We saw under which conditions we our weaknesses lie, but this also has to do with the fact that we drove in Le Mans configuration here.”