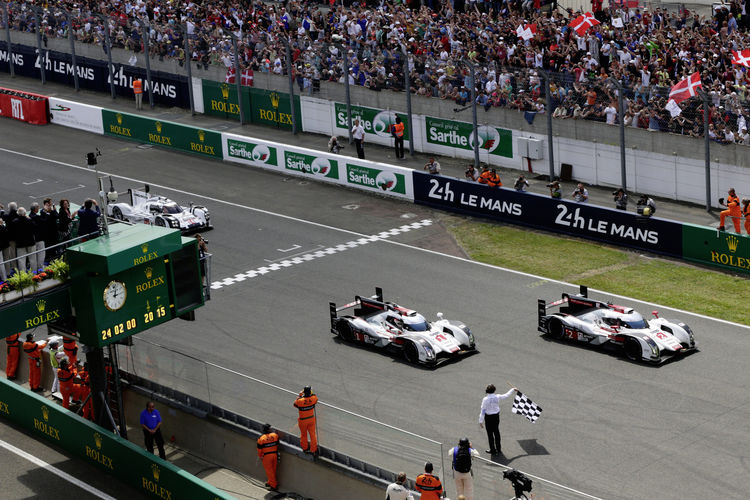 In front of nearly 300,000 spectators, Audi continued its unique string of victories in the Le Mans 24 Hours. In the 82nd running of the world’s most important endurance race, Marcel Fässler/André Lotterer/Benoît Tréluyer (CH/D/F) and Lucas di Grassi/Marc Gené/Tom Kristensen (BR/E/DK) made for a one-two Audi victory.

It marked the 13th Le Mans success for the brand with the four rings in only 16 runs – and may have been the most valuable one to date, as Audi Sport Team Joest prevailed against massive competition by Le Mans returnee Porsche and Toyota in an extremely tough race that was completely open for a long time. The decision in favor of the two Audi R18 e-tron quattro cars was only made in the final phase.

“The new Le Mans regulations place an even greater focus on the efficiency of the race cars at Le Mans than before,” said Professor Dr. Ulrich Hackenberg, who as Board Member for Technical Development is responsible for the motorsport program of AUDI AG. “In the TDI, the world’s most efficient drive technology has prevailed at Le Mans yet again. At the same time, with our successful first use of the laser light, we continued our string of technological pioneering achievements at Le Mans. I’d like to thank everybody who has worked extremely hard for this success, above all of course the Audi Sport squad.”

For Audi, the Le Mans 24 Hours was billed as ‘Welcome Challenges’ – and there were plenty of them in the 82nd running of the famous endurance race for the brand with the four rings. Following a serious accident of Loïc Duval in Wednesday’s free practice, Audi Sport Team Joest had to prepare the #1 Audi R18 e-tron quattro in record time again from scratch and to replace Loïc Duval with Marc Gené. That this team was on course for victory on Sunday morning says everything about the feat performed by the mechanics. However, in the end, the change of an injector and a turbocharger narrowly prevented this fairy tale from coming true. With a gap of three laps Lucas di Grassi, Marc Gené and Tom Kristensen took second place.

Marcel Fässler, André Lotterer and Benoît Tréluyer took the lead for the first time on Sunday morning, shortly after 5 a.m., after having put consistent pressure throughout the night on the Toyota that had been leading for a long time. As the turbocharger had to be changed on their R18 as well, car #2 temporarily dropped to third place before moving back to the front in a remarkable recovery during which André Lotterer also set the fastest race lap of 3m 22.567s.

Major misfortune was suffered by the squad of the third Audi R18 e-tron quattro with Filipe Albuquerque, Marco Bonanomi and Oliver Jarvis. Following a strong early phase, car number ‘3’ during a safety car period in pouring rain, was hit in the rear at high speed by a GT Ferrari on the Hunaudières straight. The powertrain of the R18 was so heavily damaged in the incident that Marco Bonanomi was forced to retire after just an hour and a half.

In the hectic first hours, the fascinating Le Mans prototypes of Audi, Porsche and Toyota were fighting captivating duels on the Le Mans high-speed circuit that kept the spectators in awe. The fans experienced one of the most gripping races in Le Mans history until noon on Sunday. The decision in favor of Audi was only made in the penultimate hour.

“It was a race of the kind you can only experience at Le Mans,” said Head of Audi Motorsport Dr. Wolfgang Ullrich. “There were many incidents and none of the top cars made it across the distance without any problems. The decisive factors were that our Audi R18 e-tron quattro cars were able to drive consistently fast for 24 hours, our drivers made no mistakes and our squad responded properly and quickly to the issues that occurred. In Porsche and Toyota we had two really strong rivals who, as expected, did not make life easy for us. I always believed that, in spite of the particularly difficult prerequisites for us this year, we’d be able to succeed and that we’ve got the most efficient race car. That we succeeded again makes me feel proud. ‘Thanks’ also from me to the whole squad, but to our Management Board and our Group as well that make it possible for us to demonstrate ‘Vorsprung durch Technik’ at le Mans year after year. But I also express my respect for the performance delivered by Porsche on their return to Le Mans.”

For Audi, this marked the 13th victory in the ‘24 Heures,’ the eighth one with TDI Power and the third one with a hybrid race car. The team of Reinhold Joest celebrated its 15th success in the world’s most important endurance race. Marcel Fässler, André Lotterer and Benoît Tréluyer, after 2011 and 2012, achieved their third Le Mans triumph.