{{ activeItem() }}
Twitter
10/27/21
Elected as class winner at “German Car of the Year”: The Audi e-tron GT wins in the category “luxury”. #Audi… https://t.co/XKMBjVuAfm
10/27/21
Another one drives the dust. The Audi Sport crew puts the Audi RS Q e-tron* through its paces to prepare for its gr… https://t.co/ydspYbmyTP
10/27/21
A clear roadmap. #Audi is establishing a high-voltage battery development at the Neckarsulm site. Technical develop… https://t.co/1WwGsQ3Lvp
10/26/21
Testing in progress. The Audi RS Q e-tron gets pushed to the limit ahead of the upcoming Rally Dakar. Discover mor… https://t.co/Kkwaw9bZaD
Audi on Twitter
YouTube
10/26/21

Driving, thinking and progressing. Troy Mullins doesn’t settle for par for the course, she is driven to constantly challenge herself and defy expectations. Watch her story as she shares her vision of the future. Discover more at http://at.audi/mullins-yt. #RSe-tronGT #FutureIsAnAttitude #Audi -------------------- Audi RS e-tron GT: Power consumption combined: 20.2-19.3 kWh/100km (NEDC); 22.5-20.6 kWh/100km (WLTP); CO2 emissions combined: 0 g/km. Information on fuel/electricity consumption and CO2 emissions in ranges depending on the equipment and accessories of the car. Further information: www.audi.com/dat Further information on official fuel consumption figures and the official specific CO2 emission of new passenger car can be found in the guide “information on the fuel consumption, CO2 emissions and electricity consumption of new cars”; which is available free of charge at all sales dealerships and from DAT Deutsche Automobil Treuhand GmbH, Hellmuth-Hirth-Straße 1, D-73760 Ostfildern-Scharnhausen, Germany or available free of charge at www.dat.de/leitfaden/GuideCO2.pdf
10/21/21 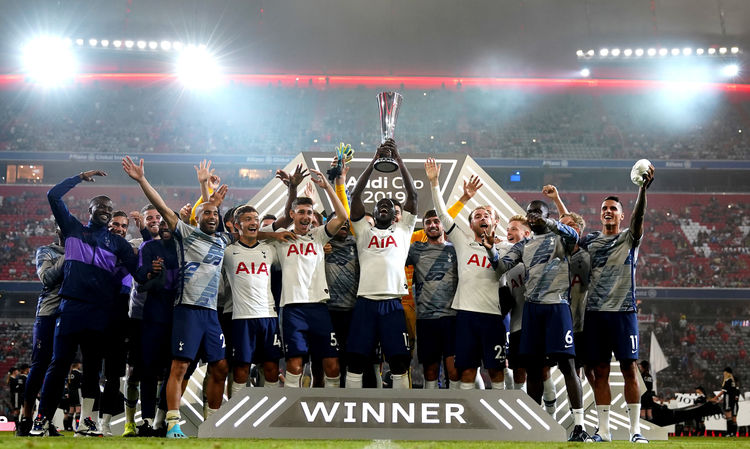 Four top-caliber matches on two days, 31 goals in total and an electrifying spectacle for some 140,000 spectators: The sixth edition of the Audi Cup ended in a triumph for Tottenham Hotspur on Wednesday night. The English team beat the hosts 8-7 on penalties in the final. Previously, Real Madrid C.F. had defeated the team of Fenerbahçe Istanbul in the match for third place 5-3.

FC Bayern München missed out on its fourth triumph in the Audi Cup in front of a home crowd: In a dramatic final that was only decided on penalties, the guests won 8-7. The score at the end of the regular playtime had been 2-2 after Bayern had still made up a 0-2 deficit after halftime. Tottenham celebrated their first success in the high-calibre preparatory tournament in Munich. The winners’ trophy was presented by Bram Schot, Chairman of the Board of Management of AUDI AG.

In the match for third place, Real Madrid and Fenerbahçe Istanbul had previously fought a fiery duel. After the guests from Turkey had initially taken the lead, both teams kept equalizing the score up to 3-3 before the squad from Madrid ultimately won 5-3.

With a turnout of some 140,000 spectators, the Allianz Arena was sold out on both matchdays. International interest was huge as well: Television coverage of the Audi Cup was aired in nearly 200 countries of the world. The fans not only got to watch top-class football but also a tremendous show. On both days, 220 apprentices of AUDI AG openend the games with a choreographed performance and for the closing ceremony, the stadium was electrically charged with a spectacular light show: perfectly fitting “Electric has gone Audi,” the slogan with which Audi promoted the e-tron, the brand’s first all-electric model, in conjunction with the tournament.

On the final day, two players were again recognized for the “Most Electrifying Moment” of a match. Real Madrid’s striker Karim Benzema was awarded the trophy featuring a sophisticated design for his headed goal in the “small final” for third place. In the last match of the tournament, it was Christian Eriksen from Tottenham whose goal that scored the 2-0 result was rewarded with the trophy.

The Audi Cup was the final acid test before the teams start fighting in earnest in the respective competitions of their countries. FC Bayern München will contest the Supercup against Borussia Dortmund as early as next Saturday night. Tottenham, their rivals in the final, will start to the new Premier League season with a home match a week later, on August 10.