{{ activeItem() }}
Twitter
09/20/20
The @FCBayern is driving change. A full fleet of Audi e-trons makes them the first football club in the world to em… https://t.co/3Otc0JtYD9
09/19/20
Innovator tested, visionary approved. The Audi Q4 Sportback e-tron concept. #Audi #AudiQ4 #etron #Sportback… https://t.co/fI3WfYN2PA
09/18/20
“It is our task to leverage our technical and engineering competence to provide answers which are enabling society… https://t.co/usLMaXlxa7
09/18/20
Watch the latest episode of #WhatsUpAudi to find out more about the new Q2 #generation and its striking #design &gt;&gt;… https://t.co/DUKsAYe75t
Audi on Twitter
YouTube
09/18/20 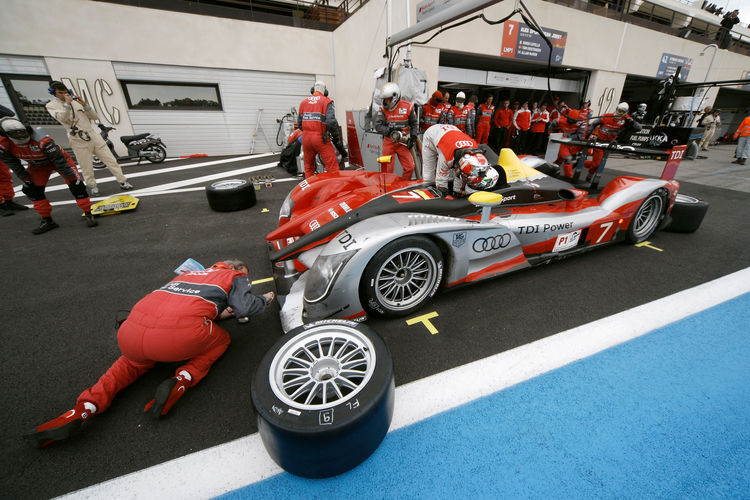 “That Dindo (Capello) and Allan (McNish) won the 8 Hours at Le Castellet last weekend with an absolutely perfect performance was good for the team who worked with the R15 plus in racing conditions for the first time. Now we know that we’re heading in the right direction with the new car. The only problem that came up in the race was a loose outside mirror – now if that’s not a good omen for Le Mans!

With all due respect for the Oreca team, there’s no doubt in our minds that the benchmark will be a bit higher for us at Le Mans with the Peugeot factory team.

All the key people that will be part of the Le Mans squad were on location at the test race at Le Castellet too. Of course the team will be a bit bigger at Le Mans because we’ll be entering three R15 TDI cars there instead of one. Three cars simply mean three chances of clinching victory.

Generally speaking, you need a lot of good people at Le Mans. I’d venture to say that a new team running at Le Mans for the first time wouldn’t stand a chance of winning the race. You need know-how, smarts, self-confidence and the instincts of the true racers. What’s more, everyone in the paddock knows that there’s only one opportunity in the year to win Le Mans. You can feel a unique combination of ambition, concentration and passion. This is the ‘cocktail’ that makes Le Mans so special.

But experience isn’t the only thing that counts. You’ve got to constantly question yourself and try and do a better job than the year before. That’s why it’s also good to have a few young elements and new motivation in the team.

Stefan Grimm is a perfect example of this. He’s just 28 years old and worked on our car as chief mechanic for the first time last year. Stefan and his two colleagues Roberto Tavaglione and Michael Strehler are responsible for about ten mechanics each, who are assigned to the various vehicles. In addition, there are some mechanics working across the car teams who can help out in case of more serious problems.

The chief mechanics are responsible for all the work being carried out on the cars. The decisions about what will be done are principally made by the vehicle engineer. In our case that’s Howden Haynes. Brad Kettler is his counterpart for car number 8, Dominic Zeidtler for car number 9. The vehicle engineers have assistants – Leena Gade (for our car), Justin Taylor and Timo Völkl – whose main job is to analyze the data.

The vehicle engineers are the direct points of contact for us drivers and they coordinate their work with the people who are responsible at Audi Sport and the Joest team that form a single unit at a race – Audi Sport Team Joest. Dr. Wolfgang Ullrich has the overall responsibility for Audi Sport, and Reinhold Joest and Ralf Jüttner for Team Joest.

A list of all the key people naturally has to include Dr. Martin Mühlmeier (Head of Technology at Audi Sport), Ulrich Baretzky (Head of Engine Development), Wolfgang Appel (Head of Vehicle Development), project manager Chris Reinke as well as the entire design and development and test team for the R15 who’ve been working on the car for many months.

Alongside Ralf Jüttner on the Joest side of the house, Jo Hausner plays a really central part in the Le Mans project. He’s responsible for the whole vehicle at Audi Sport and involved in all the important technical decisions. For me, he’s the perfect connecting link between the people who deal with the theoretical and those who handle the practical aspects.

Another key task at the race belongs to the technicians who are responsible for monitoring the telemetry displays. They’ve got to work around the clock during the race and, unlike us drivers, don’t have the chance to recharge their batteries a little in between. But Le Mans is generally an extremely tough job for everyone who’s involved in it – from the head of sport via the physiotherapists all the way to the security staff in the pits.

Throughout the Le Mans week over 100 people will be working for Audi Sport Team Joest. They all have to work together perfectly and deliver a zero-defects performance at the highest level so that at the end of the race at 3 p.m. three Audi drivers will have the chance to stand on the very top of the podium.”