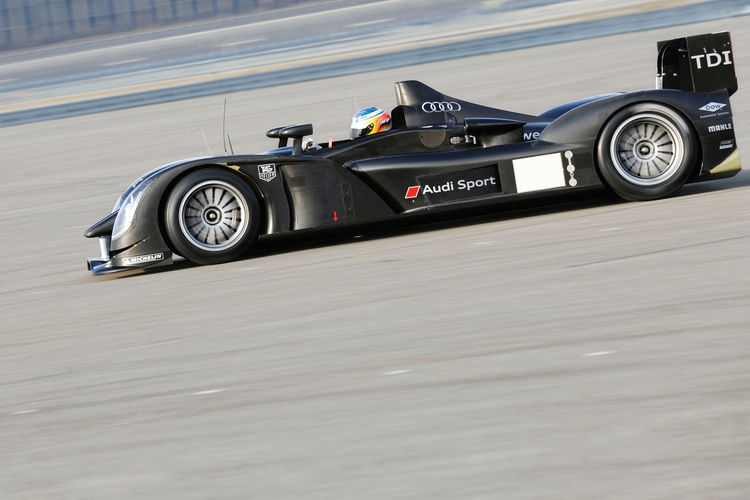 “Hello again! Today I’m writing to you from Florida where we’ve been busy testing our Le Mans car for this year, the R15 plus, since Monday. Before I left for the United States, I made a quick stop at Audi Sport’s workshop in Ingolstadt. Even there I could really feel that the new season is just around the corner and everyone’s just dying for the first race to start – whether they’re part of our sports car team, the DTM squad or in customer sport with the R8 LMS.

This feeling has even been stronger at our first test with the 2010 Audi R15 TDI. Everyone’s fully motivated, focused and has got just one thing on their mind: to give us drivers a car on June 12/13 for the Le Mans 24 hours in which we can fight for victory.

My first impression of the R15 plus is really good: the car simply looks cool and a lot more aggressive than last year’s R15. The split nose is pretty distinctive. Allan, Dindo and I’ve been going back and forth for the past couple of days about what the front reminds us of most: two ivory tusks or the legendary Batmobile. But if it turns out to be the Batmobile, we’re not quite sure yet who of the three of us would be Batman, Robin or the Joker...

But seriously now: the first few miles we reeled off with the R15 plus have been very promising. The car makes a good impression even though the main thing we did this week was to check the wind tunnel results on the track and to collect data. The real job of testing – and that, by the way, will include all the drivers – will only start for us at Sebring next Monday.

Speaking of Sebring – of course it’s a strange feeling to be at the race only as a spectator this year. With five overall wins under my belt, I’m the most successful driver of this American classic. The track isn’t the most modern one in the world but it’s always been a lot of fun for me and my colleagues to drive at Sebring because the atmosphere there is simply great and the circuit is a challenge. I’m hoping to have the chance to race there again in 2011.

It’s a shame that Audi won’t be able to compete at Sebring this year. Audi Sport was originally planning to contest the race with an interim car. But, unfortunately, not all our rivals agreed to that.

The positive thing about it is that now we can fully concentrate on our development work with the R15 plus. And I would have had to skip the race this time anyway because of my injury. I still need crutches to walk. It’s definitely too early for me to contest a race.

Of course I know that I’m still the weakest link in our Le Mans team at the moment. But I’m working feverishly on getting fit again as soon as possible and have got all the support in the world by Dr. Ullrich, Ralf Jüttner, Jo Hausner and all the others who are involved in the R15 project.

Even though I’m not fully fit for racing yet it’s great to be at the tests from day one. Allan, Dindo and I also used this week to optimize our seating position because every little detail counts at Le Mans. I’ll tell you more about that as the race keeps coming closer.

The test here is quite expensive for me, though, because Allan and Dindo have got to stop at every Starbucks – and I’m always the one who has to pay ...“