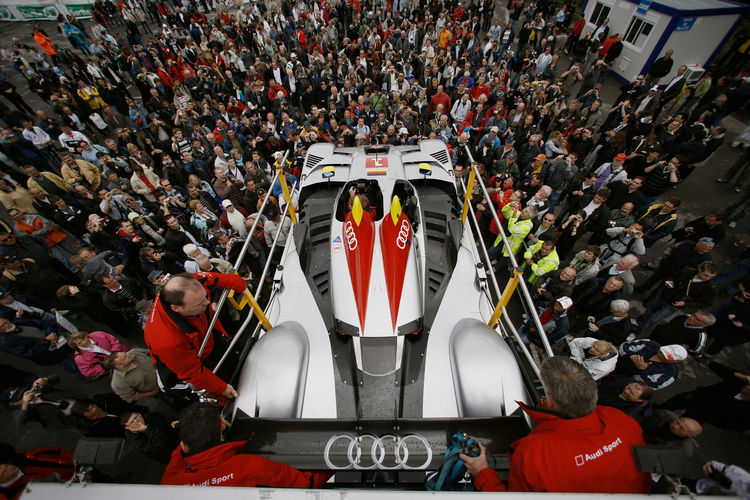 “The time has come: on Sunday afternoon I’ll meet up with my team colleagues Dindo and Allan in Paris and we’ll travel together to Le Mans from there. During the whole week we’ll be driving to the track and back together. That strengthens our team spirit and, what’s more, Dindo would arguably have difficulties finding the circuit without us ...

All kidding aside: part 14 of my Le Mans Countdowns is now the ‘final countdown.’ The number 14 fits pretty well because this year I’m contesting the Le Mans 24 Hours for the 14th time. 14 can be divided by 7, which is my favorite number. And Allan, Dindo and I are driving the Audi R15 TDI that’s designated as car number 7. Now if that’s not a good omen!

People who’ve never been at Le Mans keep asking me what we’re doing there all week. After all, the race only starts on Saturday. One thing for starters: nobody ever gets bored at Le Mans. We’ve got a full agenda every day. And every day the suspense keeps building up until on Saturday, at 3 o’clock sharp, the race starts.

Whenever I arrive at Le Mans I immediately notice the special atmosphere and the legend that surrounds this French city. By the way, the Audi driver squad traditionally stays at the Hotel Concordia in downtown Le Mans.

The first important item on the agenda is the Technical Scrutineering on Monday. Actually, the term ‘Technical Scrutineering’ describes only part of what happens there. The scrutineers check our personal gear as well: our helmets, our gloves, our overalls. Of course we also have to show our licenses. And, in addition, it’s a team presentation. There’s always an incredible turnout of fans, journalists and photographers. This means: many autographs, photos, interviews and the presentation of all the driver teams on the stage.

Our ‘friends’ from Peugeot will undergo Technical Scrutineering as early as on Sunday. Because part of our Le Mans squad travels to Le Mans directly from the DTM race at the EuroSpeedway Lausitz, Audi received one of the last slots on Monday.

Before dinner I’ll complete a full lap around the race track on a mountain bike – and I’ll be pleased if some of my team colleagues and members of the technical crew decide to join me.

We’ll use Tuesday to move into our sleeping containers in the paddock, to settle in and to prepare our gear, particularly our helmets. At 11 a.m. we’ll have the first drivers briefing, and at 5 p.m. there’ll be an autograph session in the pit lane. Afterwards, I’ll cover the 13.629-kilometer track on a mountain bike once more – like on Monday.

During the Le Mans week the fans have a lot of opportunities to get into really close touch with the drivers, and so will the journalists. From Tuesday to Thursday, Audi will be hosting a daily ‘Meet the team’ event at the Team & Media Hospitality in the paddock which, by the way, is the Red Bull Energy Station from Formula 1, where we’ll answer the media’s questions. And of course there’ll be plenty of additional interview appointments as well.

For the drivers, Wednesday starts with a late breakfast at the Team Hospitality, which will be followed by the first Technical Meeting at 11 a.m. That’s when we’ll find out what’s been planned for the practice sessions in terms of tires, aerodynamics and damper settings, for example. The weather forecast for the next few days is another topic at these meetings.

At Audi, it’s customary to divide the work between the three cars in order to gather as much data and know-how as possible for the race. The grid positions are just of minor importance to us. And each of the three drivers has to complete three night laps to qualify for the race.

On Wednesday, we’ll have a total of six hours on the track, on Thursday four. That’s a total of ten hours, which sounds like a lot but really isn’t because there are no testing opportunities at Le Mans during the year (see last Countdown).

The breaks between the practice sessions are filled with other team-internal Technical Meetings. In between, there’s at best some time for a quick plate of pasta or a banana-yogurt.

Wednesday night and Thursday night we practice until midnight. Even after practice there’ll still be some brief Technical Meetings so that we never get to go to bed before 01:30 a.m. – and with adrenaline in our blood, which isn’t optimal ... That’s why on Thursday and Friday we arrive at the track a little later.

On Friday morning, we discuss Audi Sport’s strategy for the race on the bus. At noon, I traditionally make a brief stop at the Danish camp ground where half of Denmark comes together. At 2 p.m., the official Audi press conference starts at the Audi Racing Arena, which is typically attended by about 300 journalists. From there, we go directly by shuttle bus to the driver parade in the center of Le Mans. We’re in historic vehicles and the parade is staged like a festival in front of thousands of enthusiastic spectators. Here, you can get a real feel for the huge enthusiasm and passion of the fans for this legendary race. Friday then ends with a joint dinner of all the drivers. Afterwards, we go to sleep as early as possible because the warm-up on Saturday starts as early as 9 o’clock.

From then on, one event chases the other before, at 3 p.m., the race finally starts in front of more than 200,000 spectators around the circuit. 24 hours later we’ll know who’ll have won the 78th edition of the Le Mans 24 Hours and whether we’ll have a reason for a big party at night at the Audi Racing Arena – like we last did in 2008 when we celebrated into the early morning hours. And who’ll be found on the cover pages of all the major newspapers in the world.

I hope that I’ve been able to give you some interesting background information on the Le Mans 24 Hours over the past few weeks and would be happy about many firmly crossed fingers. By the way, if you have an iPhone, an iPad or an iPod Touch, you’ll be receiving all the current information during the Le Mans week via the ‘Audi Sport’ app free of charge.”