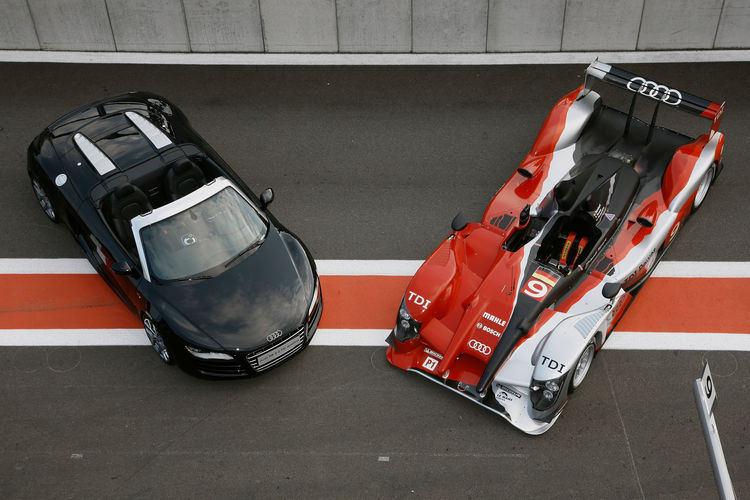 “Just two more weeks and I’ll have to pack my suitcases for Le Mans. The race of the year is coming closer with giant steps.

I clearly remember my first Le Mans race in 1997. At that time, I received a call from Ralf Jüttner just a few days before the event. I neither knew the car nor the track, so I started to explore it jogging around it after my arrival. Nevertheless, I won right away togehter with Michele Alboreto and Stefan Johansson. That was the beginning of my great love of Le Mans. Since then, I’ve won the race eight times and will be contesting this unique event for as much as the 14th time this year.

The cars have changed dramatically since my first Le Mans race. In the Joest-Porsche I drove in 1997 we still had a ‘H’ stick-shift. Because the car was right-hand drive I had to shift with my left hand – that was unusual and obviously a lot more strenuous than today in our Audi R15 TDI where we shift gears with pneumatic assistance and paddles in the steering wheel.

We didn’t have power steering in those days either. And the car was still a genuine two-seater with a single roll-over bar above both the driver and the passenger side and lots of room in the cockpit. Back then, people didn’t think that much about aerodynamics, which is much more sophisticated and complex today. The engineers are fighting for every millimeter and that’s why the seating position is completely different today too.

Audi has influenced and driven the development at Le Mans forward in the past ten years in a major way. Before Audi started its Le Mans commitment it was practically impossible to drive through the 24 hours without changing the brake discs. That was also an issue with Audi at first but the Audi Sport engineers solved it very quickly. Today, the brake discs in the R15 TDI even last for 30 hours without any problems.

There was a major development step in 2001 when Audi first combined turbo-charging with direct injection. We couldn’t have chosen a better year for that because in 2001 we had the race with heavy rain and without the TFSI engine it would have been ten times more difficult for us. But the TFSI engine did away with the typical turbo lag. The TFSI responds almost as well as a naturally aspirated engine.

Everyone knows what we’ve achieved with TDI technology since 2006. We wrote an important chapter in motorsport history and underscored the importance of Le Mans for technical progress yet again. Ever since the first race in 1923 a lot of new technologies were first used at Le Mans and later in production cars as well, such as halogen lights or radial tires. Even the development of the disc brakes and the windscreen wiper has been influenced by the Le Mans 24 Hours.

The tires have dramatically changed in recent years too. When I clinched my first victory in 1996 we used only one type of tire. Today, we can choose from many different versions. We’re even using different Michelin tires at night than during the day.

Telemetry is another example of technical progress. In 1997 the onboard data logging system was from Bosch too. But at that time it looked more like a heart diagram. We analyzed the available data together with Michel Demont who is still doing that at Joest. Today, though, the R15 TDI has over 100 sensors that constantly send signals to the pits and supply a wealth of information in real time. It takes several engineers to draw the right conclusions from this flood of data.

Bosch is also an important partner in Audi’s Le Mans project in other areas because – as with the R10 TDI – the injector nozzles of the R15 TDI’s turbo diesel engine are from Bosch. They now achieve injection pressures that nobody thought were possible a few years ago. And Audi customers benefit from this too because the findings from Le Mans are fed directly into production car development.

A great car I drove at Le Mans in 2003 had an engine developed by Audi Sport as well: the Bentley Speed 8 has been the only closed car that I’ve ever driven at Le Mans. At that time, we used slimmer tires than the open-top prototypes. And apart from traction and aerodynamics the development of the Speed 8 was specifically focused on interior temperatures and the doors which have to work well on a Le Mans car.

Speaking about Bentley: I had the opportunity once to drive the 1928 Le Mans winning car, a Bentley Blower. And also a Riley, the 1938 Le Mans class winner. Like with the Auto Union Grand Prix race cars I get to drive for Audi Tradition from time to time you can see the progress which automotive technology has made in the past decades – especially at Le Mans and with help from the 24 Hours.

That’s why this race fits Audi and our commitment to ‘Vorsprung durch Technik’ so perfectly.”