Skip to content
We are using cookies for a better user experience.
10/09/17
Neuburg an der Donau
Sport

Titles and endurance victory for customer teams of Audi Sport 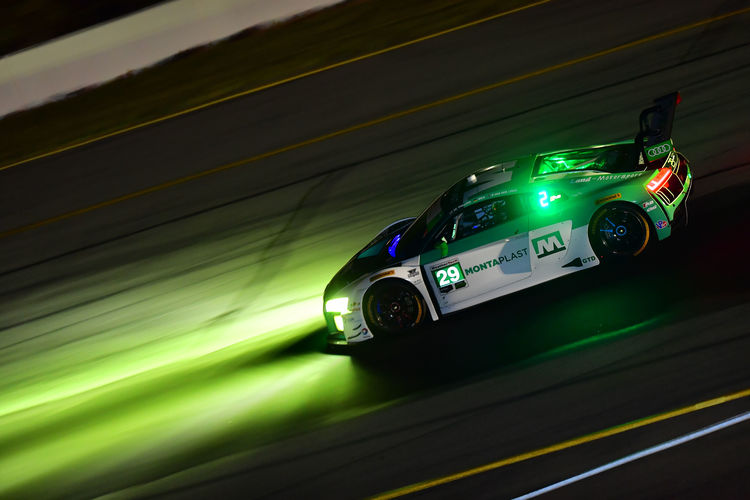 The customer teams from Audi Sport customer racing were successful in North America, Europe and Asia. An exceptional set of results for Montaplast by Land-Motorsport with victories in IMSA, the VLN and the DMV GTC on a single day.

Big finale in Hockenheim: The fans of the Audi Sport TT Cup can look forward to a big finale from 13 to 15 October. While the permanent drivers are preparing for an exciting title decision, two guest drivers will enrich the field in Hockenheim: mr.goodlife represents an international online portal that displays the latest in fashion, cars, luxury, design and travel. A novelty: For the first time in the history of the one-make cup, a driver will remain anonymous and will appear exclusively under the pseudonym of his brand. Daniel Grunenberg, the second guest driver at the Hockenheimring, is particularly well-known. Together with Carolin Niemczyk, they are the artist duo of the successful electro-pop band Glasperlenspiel. Their albums were already among the top three of the charts in Germany, Austria and Switzerland. Both races will be streamed live and can be watched at www.audimedia.tv and www.audi.com/ttcup.

Legends race for the farewell: Many of the greatest racing drivers from the history of Audi Sport will close the one-make cup with the Audi TT cup Race of Legends. The fans can look forward to a motorsport spectacle on Sunday, 15 October at 12:45 CEST, when Christian Abt, Filipe Albuquerque, Frank Biela, Dindo Capello, Rahel Frey, Marcel Fässler, Jean-Marc Gounon, Lucas di Grassi, Vanina Ickx, Tom Kristensen, Lucas Luhr, Stéphane Ortelli, Emanuele Pirro, Frank Stippler, Hans-Joachim Stuck and Marco Werner will be competing against each other. Before the race, the drivers are inviting all the members of the media to join them for brunch at 10 a.m. in the Audi Sport TT Cup Area in the Audi VIP hospitality building. Fans can follow the race at www.audimedia.tv and www.audi.com/ttcup.

Audi won at Petit Le Mans: Montaplast by Land-Motorsport brought the curtain down on the 2017 WeatherTech SportsCar Championship with a stunning victory in the Petit Le Mans. Denied a GTD class victory by a mere 0.293 seconds in the opening Rolex 24 At Daytona, Connor De Phillippi (USA), Christopher Mies (D) and Sheldon van der Linde (ZA) swept their Audi R8 LMS to a 15.518-second win in the 10-hour race at Road Atlanta – the team’s only third IMSA race of the year. Chris Reinke, Head of Audi Sport customer racing, commented: “It was an intense race. The Balance of Performance was equal as shown by the different brands bidding for podium places. The Montaplast Audi was always in the leading pack, produced an impressive performance and scored a thoroughly deserved victory. The Stevenson Audi was unfortunate while the Alex Job R8 LMS battled to the end.” “The Audi was fast all race,” confirmed De Phillippi. “The final hour was very intense with the yellows, but I always had the pace to pull away. Now we head to Laguna Seca where we will hunt for another win.” Christopher Mies added: “Having been so close to winning at Daytona makes this an even more unbelievable feeling. I’m very proud of the entire team. The racing was really tough, but the team gave us a perfect strategy.”

Second overall VLN victory: Montaplast by Land-Motorsport scored its second overall race win of the season in the VLN Endurance Championship at the Nürburgring. Following the team’s success in the sixth round held during September, the team from Niederdreisbach clinched the victory this time with the Belgian Dries Vantoor and German Markus Winkelhock in the eighth race of the season. The driver pairing won the four-hour race with an advantage of 1 minute and two seconds.

Title, wins and podium finishes: The finale of the DMV GTC was very successful for the Audi teams. Fabian Plentz and Egon Allgäuer won the overall drivers’ title of the series with an Audi R8 LMS ultra. In the first race, Ronny C’Rock with an Audi R8 LMS from Land-Motorsport achieved second place, and then he took victory in the second heat. One more podium finish was recorded during this final race: Aust Motorsport finished third with Carrie Schreiner on her debut in the series. In addition, the 19-year-old youngster, together with teammate Markus Pommer in an Audi R8 LMS, won the Dunlop 60 endurance race. Tommy Tulpe and Fabian Plentz from HCB-Rutronik Racing finished runner-up. Tulpe/Plentz successfully defended the Dunlop 60 drivers’ title, which they won last year in an Audi R8 LMS.

Victory, a podium finish and leading the standings in China: Xu Jia, together with Jake Dennis, experienced a successful fifth race weekend in the China GT Championship. On his premiere in the series, the Briton Jake Dennis and his Chinese teammate took victory in the first race of the weekend at the Chengdu circuit. In the second race, the Audi R8 LMS from the Kings Racing team finished third. Before the final in Zhejiang in a week’s time, Xu Jia leads the drivers’ standings with a ten-point advantage.

Titles decided at the finale of the Audi R8 LMS Cup: While Alessio Picariello was already crowned as the champion of the Audi R8 LMS Cup, the final round in Zhejiang saw further rankings in the overall and class standings reaching their conclusions. Mitch Gilbert from Malaysia finished second in the overall drivers’ standings of the one-make cup in his debut season, after finishing runner-up in second race. Chinese driver David Chen celebrated the overall victory in the first race, finishing ahead of Shaun Thong and Alex Yoong. Chen then, despite carrying 50 kg of success ballast, went on to finish third overall in the second race, winning the Am+ Cup. The Briton Jake Dennis won the last race of the season, followed across the finish line by Gilbert and Chen.

Two trophies in Italy: Audi Sport Italia won two trophies with the proven Audi R8 LMS ultra at the final round of the Italian GT Championship at Mugello. Luca Magnoni and Luca Rangoni finished runner-up in the GT3 class for older race cars in the first race. The duo then won the class in the second heat.

First victory for the Audi R8 LMS GT4: The youngest model from Audi Sport customer racing achieved its first victory during the eighth round of the VLN Endurance Championship at the Nürburgring. Although the production-based race car has not yet been homologated for the GT4 category, Rahel Frey and Christopher Haase won the SP-X class, a class wherein even more powerful cars were entered. The Swiss and the German were driving for the Car Collection Motorsport team. The team from Peter Schmidt is the first customer to test the Audi R8 LMS GT4 after Audi Sport Team Phoenix finished third in the SP-X class in the Nürburgring 24 Hours as a factory-supported outfit.

Strong finale in the FIA ETCC: Plamen Kralev scored his best results of the season during the season finale of the FIA European Touring Car Championship in the Czech Republic. The Bulgarian, driving an Audi RS 3 LMS from Kraf Racing, won the first race of the weekend at the Most circuit and finished runner-up in the second race.

Three successes for Kevin Arnold: The 17-year-old youngster Kevin Arnold celebrated three class wins during the DMV GTC finale. The driver who comes from Baden-Württemberg, Germany, was driving an Audi RS 3 LMS at his home round in Hockenheim and won Class 4 in both of the DMV GTC sprint races and the Dunlop 60 race, finishing ahead of more powerful GT sports cars.

Trophies in China: The TCR Asia Series and the TCR China Series took part together during the race weekend in Zhejiang. Andy Yan from Hong Kong won the first race ahead of his teammate Huang Chu Han, both driving Audi RS 3 LMS cars from the New Faster Team. Yan was the best Audi driver in the second heat when he finished second overall and was classified first within the TCR China Series results. In the third race, specifically for the TCR China Series, Huang Chu Han emerged victorious, his fourth win of the season.

Class victory in Chechnya: After the conclusion of the TCR Russia Series season, the newly crowned champion Dmitry Bragin took part in an endurance race, the 2017 Akhmat Race. The Russian, together with teammate Irek Minnakhmetov in an Audi RS 3 LMS, took a class victory in the three-hour race at the Fort Grozny circuit.