Skip to content
We are using cookies for a better user experience.
10/08/18
Neuburg a. D. Donau
Sports

Title wins for Audi Sport in Germany and Russia 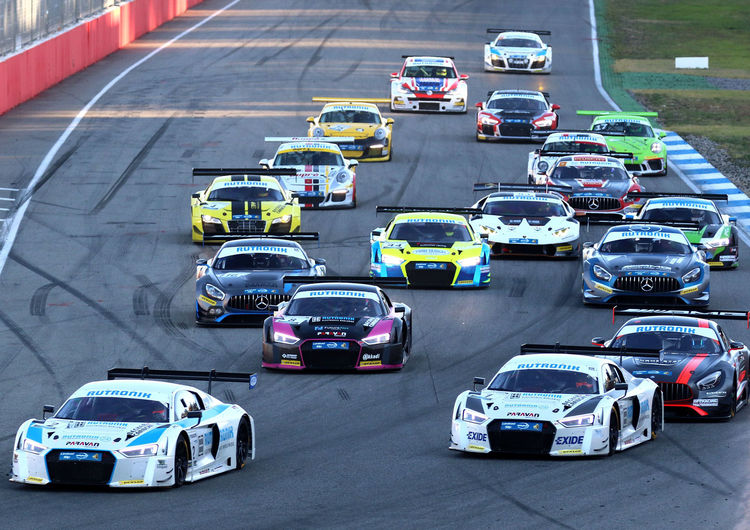 Thanks to Kevin Arnold, an Audi private driver has won the DMV GTC Dunlop 60 in an R8 LMS for the third consecutive year, while Dmitry Bragin secured the title in the TCR Russia in an Audi RS 3 LMS for the second time in a row.

Endurance title in German club sport: Junior pilot Kevin Arnold has won the German DMV GTC Dunlop 60 clubsport race series in an Audi R8 LMS. At the final round in Hockenheim, the driver from Baden-Württemberg concluded his home race with a victory. Joining forces with the Audi Sport driver Markus Winkelhock, the 18-year-old who was promoted from the Audi Sport TT Cup won the 60-minute race. Their teammates Carrie Schreiner/Fabian Plentz finished second in another Audi R8 LMS fielded by the HCB-Rutronik Racing team. For the Audi customer racing team from Remchingen, this was the third straight title in the Dunlop-60 classification after 2016 and 2017 (each with Fabian Plentz/Tommy Tulpe). The DMV GTC also includes sprint races. In the first race, Audi Sport customers scored a 1-2-3-4 victory with the R8 LMS: Driving for HCB-Rutronik Racing, Carrie Schreiner, who had already won the Class 1 title for GT3 race cars with Fabian Plentz, beat the Twin Busch driver Dennis Busch, Simon Reicher from Yaco Racing and Tommy Tulpe from the HCB-Rutronik Racing squad. Carrie Schreiner also won the second sprint.

Victory at Monza: Audi driver Bar Baruch retained his title chances in the Italian GT Championship at the penultimate round of the season in Monza. With Mattia Drudi, he won the first race in the rain after a spirited charge through the field from seventh on the grid in the Audi R8 LMS run by Audi Sport Italia. In the second race, the pair finished on fifth place. Heading to the final round at the end of October, Baruch ranks third just eleven points behind the leader. Forty points are up for grabs at Vallelunga.

One-two in China: The SIC888 Endurance Race in China concluded with a double victory for the Audi R8 LMS. The Absolute Racing squad fielded the two GT3 sports cars. After 163 race laps covering a total of 888 kilometers, Martin Rump/Yuan Bo/Bao Jinlong crossed the finish line in first with a 93-second advantage over their teammates Adderly Fong/Cheng Congfu/Sun Jingzu.

Successful debut: Four days after its world premiere in Paris, the new evolution of the Audi R8 LMS scored its first point-scoring result at the Nürburgring. The Car Collection Motorsport team contested the SPX class at round eight of the VLN Endurance Championship Nürburgring with the latest version of the GT3 sports car from Audi Sport customer racing, which has not yet been homologated. After four hours of racing, the Audi Sport driver Christopher Haase and Audi factory driver Jamie Green from the DTM achieved second place in their class and fifth overall as the best Audi team in the field.

Plenty of variety in Shanghai: The Audi Sport R8 LMS Cup delighted spectators in Shanghai with some gripping race action at its fourth event. In the first sprint, Bhurit Bhirombhakdi clinched his fourth win of the season. Behind the Thai, Alex Au from Hong Kong swept over the finish line after a strong pursuit race just half a second shy of the leader, followed by Andrew Haryanto from Indonesia. In the second race, Sun Jingzu from China won by three-tenths of a second over Yasser Shahin from Australia and Alex Au on third. Bhirombhakdi leads the series with 137 points ahead of Haryanto on 126 and Shahin with 103. Moreover, the Audi Sport R8 LMS Cup awards starting positions for a cockpit in an Audi R8 LMS at the 2019 Spa 24-hour race. Thanks to his performance in China, Yasser Shahin has earned himself one of these coveted seats. In the GT4 class, Anderson Tanoto has taken an early crown with two second places ahead of the finale in Sepang. The two GT4 race victories went to Zexuan Liu.

Three podium results at finale: Jürgen Marschlich returns from the finale of the DMV GTC with three trophies. The Audi privateer won his class in the Dunlop-60 race at the wheel of the R8 LMS GT4. In the sprint races, he achieved a third and a second place for his team Car Collection Motorsport.

Second title with Audi: Dmitry Bragin won the TCR Russia for the second time in a row with Audi. Like in the previous year, he drove an RS 3 LMS run by the Taif Motorsport team. In the final race at Fort Grozny, Bragin finished on second place behind Aleksej Dudukalo driving an Audi RS 3 LMS fielded by Lukoil Racing Team. This put Dudukalo second in the points behind Bragin. At the subsequent non-championship long-distance event, the Akhmat Race, Dudukalo and his teammate Andrej Maslennikov claimed third in the touring car category.

Class title in club sport: Kevin Arnold was in a class of his own with the Audi RS 3 LMS in the 2018 DMV GTC club sport race series. The junior driver achieved second and first place in the two sprint races at the Hockenheim finale. With these results, he won this year’s Class 6 classification.

Double victory at the long-distance race: At the second round of the China Endurance Championship, the NewFaster Racing team claimed a one-two result in its class with the Audi RS 3 LMS. Andy Yan/Terry Wong crossed the finish line first after two hours of racing on the city circuit of Wuhan with a one-lap lead over Wang Hao/Larry Lin.

Three second places in Shanghai: Filipe Souza scored two trophies at round four of the TCR China in Shanghai. At race one, the race driver from Macau finished second driving solo in the Audi RS 3 LMS. On the way to clinching another second place in the third race, he shared the cockpit with Ryan Wong. Wong finished runner-up in the second race.

Conciliatory season finale in Italy: The TCR Italy concluded with a podium place for Enrico Bettera. The Italian drove the Audi RS 3 LMS fielded by Pit Lane Competizioni to third place in the first race at the finale in Monza. Another Audi driver had already claimed victory in a classification: Giovanni Altoè won the DSG category for pilots of race cars with dual-clutch transmissions with his Audi RS 3 LMS ahead of 19 other drivers.