Skip to content
We are using cookies for a better user experience.
08/31/20
Neuburg a. d. Donau
Sports 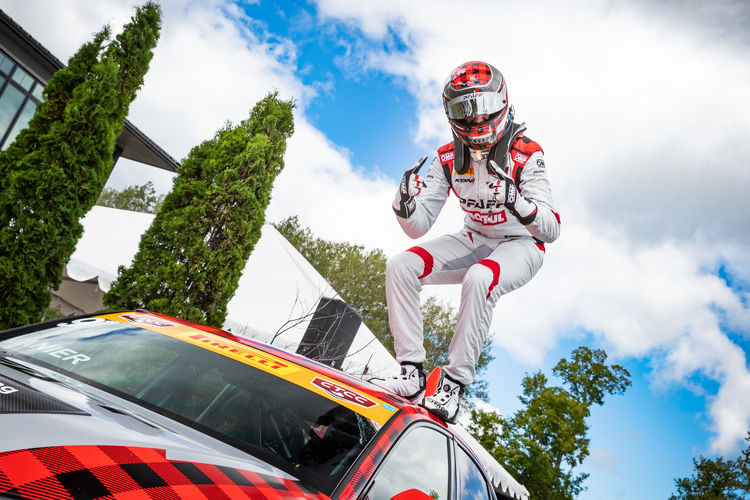 In the Canadian Touring Car Championship, Canadian privateer Zachary Vanier won the first title of an Audi Sport customer this year with an Audi RS 3 LMS. A one-two victory for the Audi R8 LMS in the Nürburgring Endurance Series and successes in the Spezial Tourenwagen Trophy complete a successful weekend for Audi Sport.

Title success in Canada: Team Pfaff Motorsports scored the first championship victory of the 2020 season for Audi Sport customer racing. In the Canadian Touring Car Championship, Zachary Vanier continued his winning streak in the Audi RS 3 LMS at Calabogie Motorsports Park, having already won the TCR class in the previous three races. He secured pole positions for the two 40-minute races in the finale. Vanier won the TCR classification in the first race by more than five seconds ahead of TWOth Autosport’s Travis Hill and Mark Motors Racing’s Marco Cirone, who both also drove an Audi RS 3 LMS. The Canadian perfectly mastered the sometimes heavy rain in the remnants of Hurricane Laura. In the final race of the season in the sun on a dry track on Sunday, Vanier maintained a 0.7-second lead over his rival Louis-Philippe Montour in a Volkswagen, with third place going to Audi brand colleague Marco Cirone. In the final standings, Vanier claimed first place with 866 points ahead of Marco Cirone with 803 points. Ron Tomlinson from TWOth Autosport in third place with 723 points also relied on an Audi RS 3 LMS this season. TWOth Autosport also won the TCR team classification. For title holder Zanier, who will turn 18 in October and started his motorsport career in snow cross at the age of nine, it’s now time to move on professionally in the automotive world. The young driver from Sudbury in the province of Ontario has just finished school and will start his studies at the Automotive Business School of Canada in September.

Championship lead extended: In TCR Japan, Takuro Shinohara has increased his lead in the standings. The young driver had already won the inaugural event with Audi Team Hitotsuyama and also presented himself in top form at the second round at Motegi. From pole position, he clinched his second victory of the season in Saturday’s race. This puts Shinohara at the top of Saturday’s standings with a lead of 18 points. In Sunday’s sprint race, the Japanese finished second in the race from second place on the grid. In the team classification, which combines the races on Saturday and Sunday, Audi Team Hitotsuyama is leading with a ten-point lead.

Three podium places in Sweden: The second round of TCR Scandinavia brought the Audi customer team Brink Motorsport three trophies. In the first sprint on the Skellefteå circuit, Tobias Brink improved from fifth place on the grid in the Audi RS 3 LMS to third position. In the second race the Swede crossed the finish line in second place. In the final third sprint Brink improved from seventh on the grid to second position. His teammate Hannes Morin was third in the race and stood next to him on the podium. At the halfway point of the season, Brink is thus tied for third place in the championship with Rob Huff, who is second in the standings.

Ready for the 24-hour race: Team Bonk Motorsport has completed its preparations for the Nürburgring 24 Hours with a podium result on the Nordschleife. At the fifth round of the Nürburgring Langstrecken-Serie, Hermann Bock, Max Partl and Alexander Prinz shared an Audi RS 3 LMS in the SP3T class with a healthy number of eight participants. The driver combination reached third place after 37 laps. After a victory in the second race, a second place at the next event and third place in the subsequent competition, Team Bonk Motorsport thus continued its podium series on the fifth race weekend.

Two class wins in the Netherlands: Max Frederik Gruhn dominated his class on the third race weekend of the Spezial Tourenwagen Trophy in Assen. The junior driver in the Audi RS 3 LMS prevailed in both sprints in his category with a one-lap lead in each case over Opel driver Franjo Kovac.

Catching up in Italy: Eric Brigliadori managed a remarkable catch-up on the third race weekend of TCR Italy. The private driver had only qualified for 13th on the grid in the Audi RS 3 LMS, but in the first sprint on a wet track he drove continuously forwards. In the course of just 13 laps he improved to third position and took over the lead of the standings. On Sunday, Brigliadori initially finished fourth and remained the leader of the standings, but a five-second penalty due to a collision with a competitor later threw him back to 13th position. The Audi privateer is thus third in the standings and continues to lead the junior classification for drivers under 25 years of age. His BF Motorsport team is tied for first place with one other team in the Trofeo Nazionale team classification at the halfway point of the season.

1-2 victory in the Nürburgring Langstrecken-Serie: Two teams from Audi Sport customer racing celebrated first and second place with the Audi R8 LMS in preparation for the Nürburgring 24 Hours. 16 changes in the lead marked the longest round of the NLS season with six hours of racing. Only in the last lap Audi Sport Team Land prevailed, after the leading Ferrari had to drive slowly to save fuel and cross the finish line at all. Nordschleife rookie Mattia Drudi had shared the cockpit of the victorious car with his Audi Sport teammates Christopher Mies and Kelvin van der Linde, who had clinched the pole position. The team of Wolfgang and Christian Land with a wealth of experience already celebrated its 25th victory at the NLS including the predecessor VLN series. Audi Sport Team Car Collection crossed the line only 3.9 seconds behind the winners. Audi factory driver Robin Frijns from the DTM had shared the cockpit of the Audi R8 LMS with the three Audi Sport drivers Mirko Bortolotti, Christopher Haase and Markus Winkelhock in Peter Schmidt’s team.

Uwe Alzen remains unbeaten with Audi: Former professional driver Uwe Alzen remains the measure of all things in the Spezial Tourenwagen Trophy in the 2020 season. On the third race weekend of the sports and touring car racing series at the Assen circuit in the Netherlands, the driver from Betzdorf won both sprints from pole position. In addition to the Spirit Race Team Uwe Alzen Automotive, Berthold Gruhn, another private driver in this popular sport category has been relying on the Audi R8 LMS for years. In the first race, the entrepreneur achieved third place and in the second sprint to second place, in each case a podium success in his class.

Class success at the Nürburgring: The Giti Tire Motorsport by WS Racing team won the SP8 class as the only participant at the fifth round of the Nürburgring Langstrecken-Serie. In the cockpit of the Audi R8 LMS GT4, the privateers Henrik Bollerslev/Niklas Kry/Carrie Schreiner/Guido Wirtz took turns in the 6-hour race.

Maximilian Paul is the man to beat: After Tim Reiter had won both races at the season opener of the Audi Sport Seyffarth R8 LMS Cup, Maximilian Paul who returned to the one-make cup was unbeatable on the second weekend in the Czech Republic. In the first sprint race on the Most circuit, Kris Heidorn, another returnee, took the lead after the start of the race. But in the first corner, the 2018 champion left the racing line and had to let Maximilian Paul and last year’s champion Robin Rogalski pass. The fastest trio also crossed the finish line in this order. In the rainy second race, Paul had to defend himself almost the entire race distance against the attacks of Kris Heidorn, who finished second only half a second behind. Tim Reiter secured the trophy for third place after a lap-long duel against Robin Rogalski and leads the table with a 17-point lead over Tom Spitzenberger.