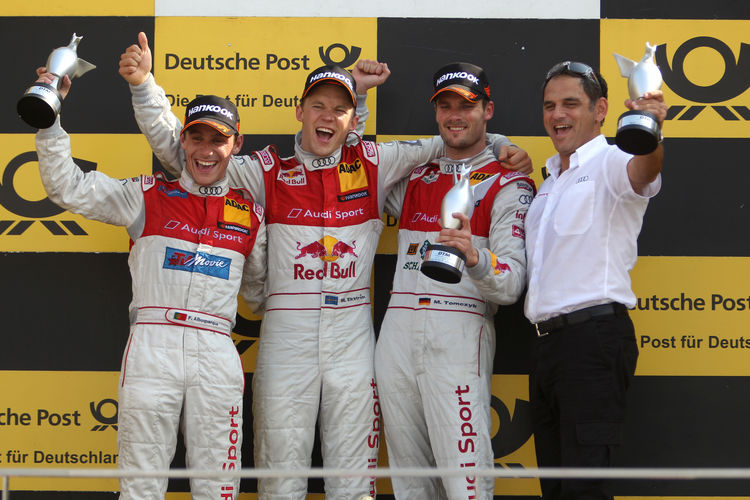 Triumph at Valencia: With a 1-2-3-4-5-6 result and an early title win Audi managed to crown its 2011 DTM season. Mattias Ekström celebrated his third victory of the season, Filipe Albuquerque, as the runner-up, his first podium finish and Martin Tomczyk in third place is the new DTM Champion.

Third place was sufficient for Martin Tomczyk to be determined as the early title winner. With a 13-point advantage over his title rival, Bruno Spengler (Mercedes-Benz), the Bavarian managed a special feat: For the first time he won the coveted DTM trophy, for the first time Audi Sport Team Phoenix achieved this with a year-old car, and it has been seven years that an Audi driver was determined as the champion even before the finale. In 2004, Mattias Ekström, who now celebrated overall victory at Valencia, had last secured an early title win. Tomczyk had managed a perfect recovery after having started from position ten on the grid. As early as on lap one he was on position six, and in third place after his second stop.

“I extend warm congratulations to Martin Tomczyk, his team and the entire Audi squad on this outstanding achievement. The fans experience captivating duels at the highest sporting level and in Martin an absolutely deserving champion of the 2011 season,” says Rupert Stadler, Chairman of the Board of Management of AUDI AG. “After the triumph at the Le Mans 24 Hours and numerous other victories this title is already crowning a successful Audi motorsport year now.” His fellow board member Michael Dick, who is responsible for Technical Development, also congratulated the new champion: “’Well done’ to Martin Tomczyk, who has driven an outstanding season and always proved to be a fair and tremendous sportsman both on and off the track. At the same time, the fifth DTM title of the Audi A4 DTM since its debut in the 2004 season is a fantastic farewell gift. The development of our new Audi A5 DTM for the next season is concurrently in full swing. At Audi, we’re working on this car to follow in the successful footsteps of its predecessor with all our passion.”

The driver who definitely dominated the racing action in Spain was Mattias Ekström. The two-time champion led the field on 38 of the 45 laps. After the successes at the Nürburgring and Oschersleben the Swede from Audi Sport Team Abt Sportsline celebrated his third race victory within four races. Behind him, Filipe Albuquerque complemented what was a perfect weekend for him. The DTM rookie from Portugal had started from position two, defended his place up to seeing the checkered flag, and thus gave himself and Audi Sport Team Rosberg the best result of the season. He finished 15.847 seconds ahead of Martin Tomczyk.

Subject to an appeal which two Mercedes-Benz teams have filed against the disqualification of their drivers, three other Audi racers finished in the subsequent places at Valencia. Timo Scheider, who managed setting the fastest lap, achieved fourth place in front of his Abt team-mates Miguel Molina and Oliver Jarvis. Mike Rockenfeller took ninth place, Rahel Frey 14th. Edoardo Mortara retired in the pits three laps before the end of the race due to a handling problem.

“This has been a fantastic day for Audi,” said a pleased Dr. Martin Mühlmeier, the Technical Director of Audi Sport. “Six Audi A4 DTM cars on the top six positions, Mattias Ekström has shown another top-class performance, Martin Tomczyk has clinched the title with a tremendous recovery on his own power, and Filipe Albuquerque has achieved his first podium result. We’re overjoyed.”

From the United States Head of Audi Motorsport Dr. Wolfgang Ullrich, who was on location at the ILMC race at Road Atlanta, sent his congratulations as well: “Absolutely well done, I’m tremendously happy for Martin. He has been a member of our Audi family in the DTM for eleven years and has experienced many ups and – no doubt – downs. But he has never lost his spirit and has emerged as a leader, particularly in this season. Now he has rewarded himself and his team for the hard work and the fighting spirit with the title. We’ve always known that Martin is a strong racer and a great guy – now he’s also a true champion.”