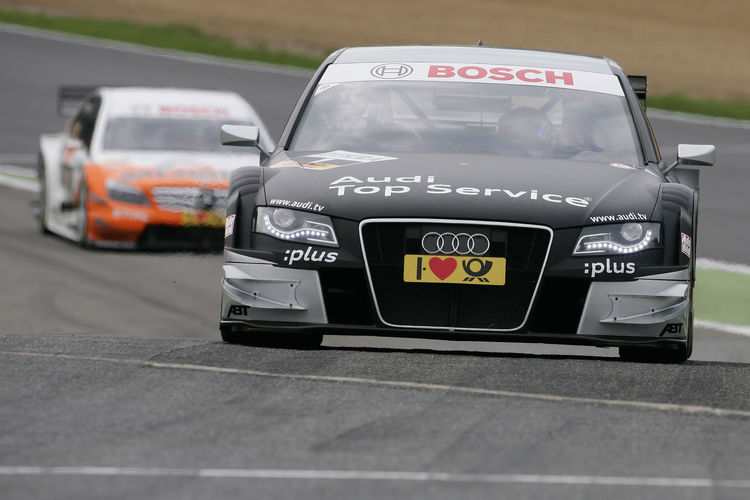 Title defender Timo Scheider as the best Audi driver will start from position three at the DTM’s UK round at Brands Hatch (Sunday starting at 1:45 p.m. – German time – live on “Das Erste”) All five Audi A4 DTM cars from Audi Sport Team Abt Sportsline will go into the race from the first five rows.

For the third consecutive time Scheider was the quickest Audi driver on the 1.929-kilometer circuit which is the shortest one in the DTM. “I was aiming for the two front rows, and that’s where I am,” said the 31-year-old after qualifying on the demanding track on the outskirts of London where he clinched the pole position in 2008 and second place on the grid in 2009. “On new tires my Audi A4 was very good, but not completely perfect in the last segment. I’ll give everything tomorrow to make the best of what is another good qualifying result.”

Scheider’s team colleagues Mattias Ekström, Oliver Jarvis, Miguel Molina and Martin Tomczyk achieved grid positions six, seven, eight and ten. Ekström had a minor modification made to his Audi A4 DTM between the second and third qualifying segments which didn’t produce the desired result, though. “I didn’t manage to get the front tires to work properly in Q3,” commented the Swede.

“Unfortunately, with Timo (Scheider) we’ve just got one driver in the top four on the grid and we know how difficult overtaking is at Brands Hatch,” said Head of Audi Motorsport Dr. Wolfgang Ullrich. “But on a positive note, we’ve had a very good race simulation here in free practice, particularly with Timo. So we should be in a good position for the race which, with 98 laps, is extremely long. The strategy, too, is very important on this short circuit.”

The starting order for the seventh DTM race of the year promises particularly high suspense: seven of the nine rows are shared by an Audi A4 DTM and a Mercedes C-Class, respectively. DTM rookie Miguel Molina will again start into the race as the best driver of a 2008-specification vehicle. Molina immediately handled the difficult Brands Hatch circuit well and secured eighth place on the grid.

Alexandre Prémat and Mike Rockenfeller will start from positions eleven and 13 for Audi Sport Team Phoenix and Katherine Legge (Audi Sport Team Rosberg) again won the ladies’ duel against Susie Stoddart, just barely missing the leap into the second qualifying segment at her home round by one thousandth of a second. Her team colleague Markus Winkelhock had to settle for grid position 18.