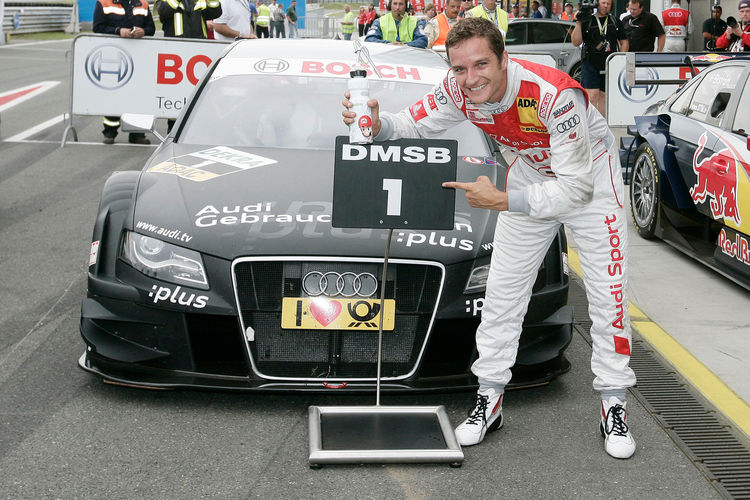 The anniversary has been perfected: In front of 64,000 spectators (throughout the weekend) title defender Timo Scheider clinched the 50th DTM victory for Audi at the Motorsport Arena Oschersleben. Mattias Ekström and Martin Tomczyk completed a commanding 1-2-3 win by Audi.

As in qualifying on Saturday, the four Audi A4 DTM cars of Audi Sport Team Abt Sportsline were in a class by themselves in the race as well. The best Mercedes crossed the finish line after 50 laps with a gap of almost 17 seconds.

“The 50th pole position for Audi in the DTM at Zandvoort and now the 50th victory – two nice numbers on the occasion of the Audi’s brand’s centenary,” said Head of Audi Motorsport Dr. Wolfgang Ullrich. “Our drivers Timo Scheider, Mattias Ekström, Martin Tomczyk and the team did an absolutely flawless job today and dominated the race. I’m proud of this performance but also of the spirited drive of Tom Kristensen, who showed a fantastic recovery after a drive-through penalty.”

Timo Scheider laid the foundation for his fourth exploit in the DTM with a perfect start at which he outran the quickest in qualifying, Tom Kristensen, and turned into the first corner as the leading car. After that, he only had to temporarily relinquish his first place during the two mandatory pit stops. “Many, many thanks to the team, the car, and the pit stops today were perfect,” said Timo Scheider after his first victory of the season. “After the start, I was able to control the race. Losing the lead of the standings at Zandvoort was painful. Now I’m back in the title fight.”

Mattias Ekström moved forward from fourth place on the grid to second in the race. On the second lap the Swede took advantage of a small mistake by his team-mate Martin Tomczyk and subsequently benefited from a drive-through penalty imposed on Tom Kristensen. The Audi A4 DTM of the Dane was not standing exactly within the lines prescribing the position on the starting grid.

With his second place Mattias Ekström caught up with the leader of the standings, Gary Paffett. Both have 28 points at the season’s mid-point. Timo Scheider ranks just one point behind them in third place.

Martin Tomczyk finished third and thus clinched his best podium result of the year. After his mishap on the grid, Tom Kristensen managed to push forward from 17th to eighth place. On the last lap he bumped Norisring winner Jamie Green out of the points in the process. As a result, all four drivers of a current Audi A4 DTM scored points at Oschersleben.

For the drivers of year-old cars, the race was a disappointment. Oliver Jarvis lost two points he had seemed to be sure of three laps before the finish due to a puncture – a fate he shared with Markus Winkelhock. Mike Rockenfeller bumped Alexandre Prémat into the gravel trap with three laps to go and received a retroactive time penalty of 30 seconds. Katherine Legge’s race as well ended prematurely after an off.