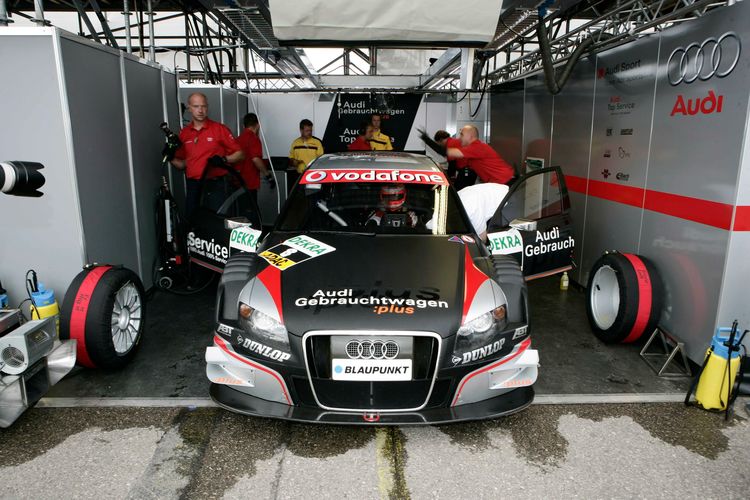 Timo Scheider will start from fifth place in the DTM race at the Norisring on Sunday as the best Audi driver. His teammates from Audi Sport Team Abt Sportsline, Mattias Ekström, Tom Kristensen and Martin Tomczyk, will go into the race from positions seven, eight and eleven. Local hero Christian Abt (Audi Sport Team Phoenix) in tenth place was the best driver of an Audi A4 DTM with last year’s specifications.

Based on the data gathered on Friday, the Audi squad had worked out a good set-up for the special characteristics of the merely 2.3-kilometre long and very bumpy city street circuit. Mattias Ekström confirmed this by setting the second-best time in the morning’s free practice session.

However, rain showers setting in before the start of the qualifying practice completely changed the situation. Being out at the right time on the right tyres and with optimal tyre pressure for the respective track conditions was the most crucial factor.

Three Audi drivers, Timo Scheider, Mattias Ekström and Tom Kristensen, made it into the top eight on the wet and extremely slippery circuit.

In the first section, Christian Abt set the fastest time, while in the second segment the Bavarian had to settle for tenth place. His teammate Alexandre Prémat, who had been the second-quickest driver in dry conditions on Friday, slid into a tyre wall as early as in the first section.

A strong performance was shown by Vanina Ickx: For the first time since the rainy qualifying at Barcelona in 2006, the Belgian in her 2005-spec A4 DTM clinched a place among the top 14.

For the race on Sunday, better weather has been predicted. As always, the 74 Norisring laps will be particularly rough on the brakes. Audi Sport took respective precautions for this: The newest-generation Audi A4 DTM cars are running with additional brake cooling in Nuremberg.

Dr Wolfgang Ullrich (Head of Audi Motorsport): “We’ve always had a certain amount of difficulties at the Norisring. We had a good set-up for dry weather but in the wet qualifying the only thing that actually counted was who was out at the right time with the right tyre pressure. Only three Audi cars among the top eight, and not on very good positions either, that’s disappointing. We’ll try and make the best of it tomorrow.”

Timo Scheider (Gebrauchtwagen:plus/Top Service Audi A4 DTM #8)
5th place, 57.412 / 56.799 / 56.527s
“In the beginning there was so much water on the track that aquaplaning set in as early as on the start-finish straight. That was really at the limit. It was all about ‘surviving’ up to the last qualifying. On the last trial we had to manage our time such that we’d be able to do one more lap in order to take advantage of the optimum conditions as the track was drying off. We succeeded in doing that, and it helped me because on the last lap I set my best time.”

Mattias Ekström (Red Bull Audi A4 DTM #3)
7th place, 57.355 / 57.239 / 56.678s
“In the rain this circuit is particularly difficult as the conditions have such a heavy impact on grip on this special track. It was good making it into to the final group. A better result than that was not possible with our set-up because I was driving absolutely at the limit. We were well prepared for dry conditions. In rain, though, we still need to improve.”

Tom Kristensen (Siemens Audi A4 DTM #7)
8th place, 57.586 / 56.683 / 56.746s
“The qualifying conditions were very difficult because on this non-typical asphalt there’s hardly any grip in rain. In the second session I was third. We were shooting for pole that’s why we gambled a bit with tyre pressure and timing my lap in the last session. Unfortunately, that didn’t work out. But in view of my position in the Championship it was the right decision to take this risk. Today we lost – but maybe we’ll win tomorrow.”

Christian Abt (Playboy Audi A4 DTM #16)
10th place, 56.706 / 57.322s
“The first outing was very good – it couldn’t have been any better. The second one was okay too, only on the last three laps our timing didn’t work out all the way. A tenth was missing. I suppose I left it in the last turn on my last lap. The race is long, the starting position not so bad. There are still some possibilities.”

Martin Tomczyk (Red Bull Audi A4 DTM #4)
11th place, 57.145 / 57.381s
“It’s not a pleasant feeling being the last one in the group of 2007-spec Audis. I had set my sights higher than that. Eleventh place means starting right in the middle of the commotion. The main thing is to get through the race unscathed. I’m hoping that the guys in front of me will fight each other. And I know that I can rely on my team. With good pit stops and a good strategy we can score a few points. Then we’ll see where we stand in the tables.”

Vanina Ickx (Audi A4 DTM #21)
14th place, 57.741 / 58.072s
“The conditions in the rain suit me well, as we could see last year at Barcelona where I made it into the second qualifying session as well. Of course I would have liked to improve a little more in the second session but this way I’m also definitely satisfied with position 14 on the grid.”

Alexandre Prémat (Audi Bank Audi A4 DTM #17)
15th place, 57.804s
“I’m very disappointed. In dry conditions, my car was perfect but in the rain it behaved very nervously when first hitting the brakes. Unfortunately, I made a mistake. I was at the limit when the rear swerved in front of the chicane. This caused me to slide backwards into the tyre wall. Of course this grid position won’t be of any help, but in the race I’m going to give everything.”

Adam Carroll (Audi A4 DTM #20)
16th place, 58.012s
“I don’t know what the reason is. I’m simply not good enough yet in qualifying. Again, it didn’t really work out. Now it’ll be crucial to improve in the race and to see the chequered flag. A lot can still happen on Sunday. ”

Mike Rockenfeller (S line Audi A4 DTM #11)
18th place, 58.556s
“I’m very disappointed. In dry conditions, things were going quite well in the morning. Then it started raining before the qualifying practice. I had no grip whatsoever and tried everything. It’s disappointing to qualify only for 18th place.”

Lucas Luhr (Philips Audi A4 DTM #12)
19th place, 59.160s
“There’s not much to say: We were clearly too slow. My car had no grip – neither when braking, nor when turning, nor when accelerating out of corners. Unfortunately, as a result, you end up so far at the rear.”

Hans-Jürgen Abt (Team Director Audi Sport Team Abt Sportsline): “I’m very disappointed. We would have been quick enough, but a few mistakes were made. We’re going to analyse the exact reasons behind them. Now we need to contest the race from worse positions. But those who know us are aware of the fact that we won’t give up. ”

Ernst Moser (Team Director Audi Sport Team Phoenix): “All the work we did in dry conditions we weren’t able to apply in qualifying in the rain. With Alex Prémat, it’s likely that we used insufficient downforce. If Christian had managed one more lap he would have made it into the top group. This way, unfortunately, we didn’t manage to make it into the third session.”

Arno Zensen (Team Director Audi Sport Team Rosberg): “This was not to my liking whatsoever today. However, we should bear in mind that Alexandre (Prémat), Lucas (Luhr) and ‘Rocky’ have hardly any experience with the A4 DTM in the rain. At the Norisring, it’s especially difficult to drive in these conditions. Christian (Abt), at least, was able to draw on his experience.”

The starting grid in Nuremberg