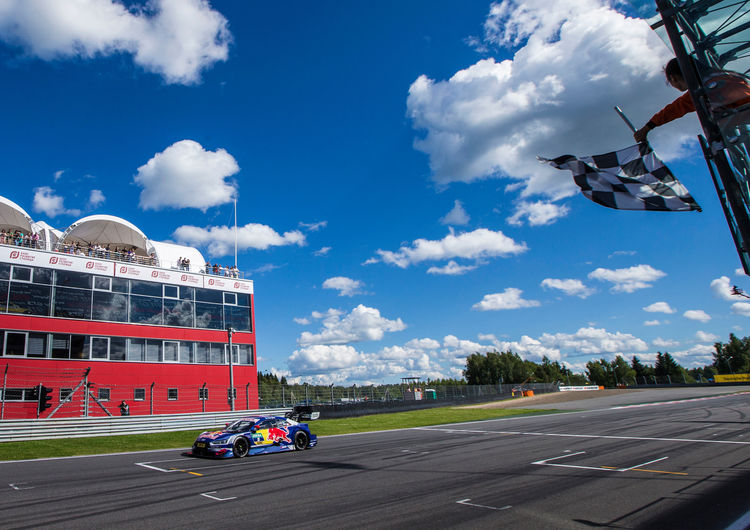 With a spectacular comeback drive Audi campaigner Mattias Ekström (Audi Sport Team Abt Sportsline) has recaptured the lead in the DTM. Following the turbulent first race of the second half of the season, three Audi drivers are now ranking in the top four spots of the overall classification.

Sunday’s race at Moscow Raceway was a real thriller. Following an early safety car period, the drivers who had not pitted yet for their tire change had a disadvantage. They included Mattias Ekström who, after having clearly led the race in the beginning, dropped to tenth place, having to recover position by position afterwards. The toughest rival he was up against in his comeback drive was reigning champion Marco Wittmann (BMW) whom Ekström, following a fierce duel on the penultimate lap, displaced from position two. Subsequently, the Audi driver still chased race leader Maro Engel (Mercedes-Benz), who had changed tires as early as on lap one and was clearly slower than Ekström in the final stage. On seeing the checkered flag, the Swede was merely 0.376 seconds short of clinching his first win this season.

“After Budapest, this is the second time a safety car cost me victory,” Ekström said after the race marked by tough duels and spectacular overtaking maneuvers. “In the beginning, I was battling for the lead with Bruno (Spengler). On the long run, I was faster and able to overtake him. As a result of the safety car, the cards were reshuffled. From then on, it was a highly entertaining race. In the end, I’m very happy with second place today, 20 points from qualifying and the races, plus the lead of the standings.”

At Moscow Raceway on Sunday, nothing was handed for free to the other Audi drivers either. René Rast, Jamie Green (both Audi Sport Team Rosberg) and Mike Rockenfeller (Audi Sport Team Phoenix) with bold maneuvers from rear positions advanced to fourth (Rast), fifth (Green) and seventh (Rockenfeller) place. After the end of the race, Rockenfeller received a 5-second time penalty that cost him his position in the points.

Loïc Duval was in the group of drivers having pitted before the safety car period. As a result of this strategy, the Frenchman was running in fourth place some of the time, but shortly before the end of the race was touched by two rivals and dropped to position 14. By contrast, Nico Müller drove an exceedingly long first stint. Up until four laps before the race ended, the Swiss was defending his lead before making his pit stop.

“That was an incredibly thrilling race,” said Head of Audi Motorsport Dieter Gass. “From lights to flag, there were gripping duels and overtaking maneuvers. This race had everything DTM fans would like to see. Without the safety car we might have been able to win today as well. But even so, it was a good result for us on the whole, with three cars in the points, plus one podium. In all the championships, we’re now in a good position.”

The drivers’ classification is now led by Mattias Ekström, trailed by René Rast with a one-point deficit. Jamie Green and Mike Rockenfeller maintain positions four and five. In the manufacturers’ standings, Audi has extended its advantage to 90 points. In the teams’ classification, two Audi teams – Audi Sport Team Rosberg and Audi Sport Team Abt Sportsline – are in the top spots after ten of 18 races.

The DTM will continue at Zandvoort on the Dutch North Sea Coast on August 19 and 20.