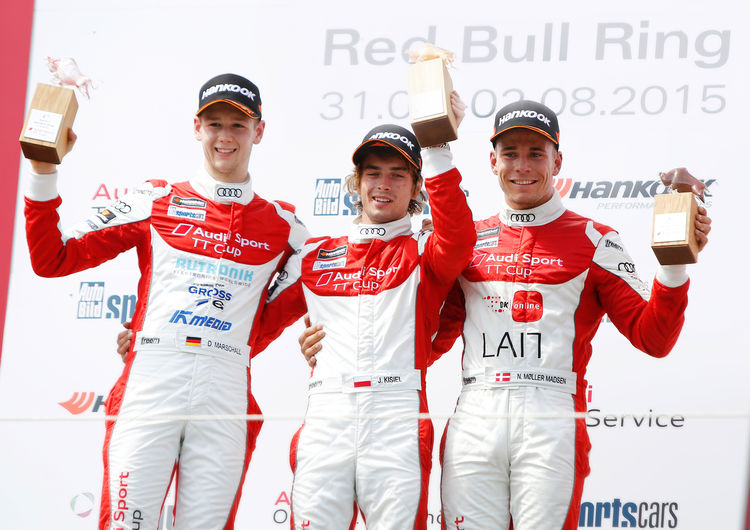 Next weekend, the grand season finale of the Audi Sport TT Cup will be held at the Hockenheimring. Three drivers will still have a chance of clinching the first championship title in the new Audi one-make cup on October 17 and 18. The guest entrants’ field will see a race between two Audi factory drivers – Marco Bonanomi (I) and René Rast (D) – from the Le Mans squad. Two brand-new champions from VW one-make cups will be competing in the guest drivers’ classification as well.

For the last race weekend on October 17 and 18, 2015, the Audi Sport TT Cup team managed to sign two Audi Sport factory drivers. Bonanomi and Rast are going to duel against each other in the guest drivers’ classification. “This will be another tremendous highlight to close the season,” says Project Leader Rolf Michl. “The Audi Sport TT Cup’s first season had previously featured a number of high points. Now, we’re looking forward to a gripping finale of the inaugural season and the high-caliber guest entrants.”

Three of the permanent entrants – Jan Kisiel (PL), Nicolaj Møller Madsen (DK) and Dennis Marschall (D) – are still battling for the title. 21-year-old Kisiel has the best chances in the title race. With 199 points, the young driver from Warsaw is leading the drivers’ standings by 35 points, ahead of Møller Madsen (164 points). Marschall trails them within striking distance (163.5 points) – a maximum of 50 points will be awarded in Hockenheim. Kisiel only has to finish one of the two final races at the Hockenheimring in fourth place to secure the title.

In addition to Bonanomi and Rast, Aaron Mason (GB) and Jeffrey Kruger (ZA) will be tackling the challenge posed by the Audi Sport TT Cup in the guest entrants’ classification. Mason secured the championship title in the VW Racing Cup Great Britain this year. Kruger won the title in the VW Golf Cup Poland. The field of the guest entrants will be completed by former freestyle skier and X Games gold medalist Jon Olsson (S), as well as the racing-experienced journalists Alberto Sabbatini (I) and Reiner Kuhn (D). Audi Sport TT Cup track commentator Patrick Simon (D) will be driving another 310-hp Cup racer and provide a running commentary of the races from the cockpit.

As the season is about to culminate in the finale, the application stage for the 2016 season of the Audi Sport TT Cup is in full swing. “We’ve already received numerous promising applications from around the world,” says Rolf Michl. For the 2015 season, 165 candidates from 30 nations had applied for the 18 permanent entries in the Audi one-make cup.