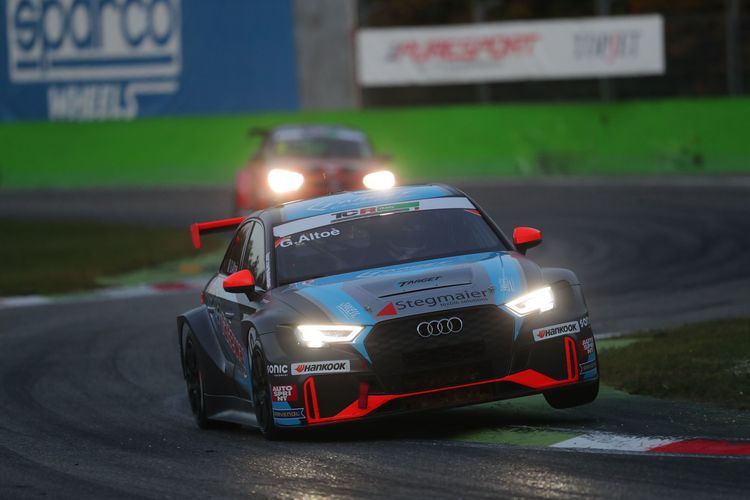 Three customer teams were successful with the Audi RS 3 LMS in the final events of three European TCR series.

The best for last: The Audi RS 3 LMS in positions one, two and three in the TCR Italy finale at Monza achieved its best results of the season to date. Giacomo Altoè with Team Target Competition in the final racing event won round one with an advantage of 0.138 seconds, marking the first victory of the Audi RS 3 LMS in the TCR Italy. In race two, Altoè, as the runner-up, had to admit defeat by 2.425 seconds. He was trailed by Max Mugelli from Team Pit Lane Competizioni in third place in another Audi RS 3 LMS. Mugelli finished the season as the best Audi campaigner in position four of the standings. In the manufacturers’ championship, Audi is the third-best of seven manufacturers.

Victorious finale in Portugal: Team Sporting Clube de Braga in the finale of the TCR season on the Iberian Peninsula celebrated a victory. At Portimão in the south of Portugal, Rafael Lobato in the team’s Audi RS 3 LMS achieved a clear victory with a 9.5-second advantage in race three. Previously, his teammate, Patrick Cunha, had achieved second place in race one. Consequently, in the final TCR Ibérico classification, Rafael Lobato/Patrick Cunha took second place in the debut season of the Audi RS 3 LMS.

A first place and four additional podiums in the Netherlands: The sixth race weekend of the TCR Benelux was a success for the Bas Koeten Racing customer sport team and its Dutch driver squad. In the finale of the series, Paul Sieljes/Willem Meijer in the Audi RS 3 LMS won the endurance race on the race track at Assen. In the subsequent first sprint race, Mika Morien mounted the podium for the team as the runner-up. In the third sprint race, Rik Breukers crossed the finish line in second place in front of his teammate, Paul Sieljes. In the final fourth race, Rik Breukers, in position two, clinched another trophy. As a result, Bas Koeten Racing finished the season in position three of the teams’ standings and the Audi RS 3 LMS took third place in the manufacturers’ classification.

End-of-the-season podium: Phoenix Racing finished the 2017 endurance racing season with a podium finish on its own doorstep. The team based in Meuspath achieved third place in round nine of the VLN Endurance Championship Nürburgring. The two Germans Christian Mamerow and Frank Stippler shared an Audi R8 LMS with Dutchman Robin Frijns on the Nordschleife. In the standings, Team Montaplast by Land-Motorsport is the best Audi outfit. Following last year’s victory in the VLN Speed Trophy, Wolfgang Land’s squad achieved second place this season.

Test day in Neuburg an der Donau: Current and prospective customers got to know the entire model range of the customer sport program in Neuburg, Audi Sport customer racing’s headquarters. From October 19 to 21, numerous guests used the opportunity to familiarize themselves with the Audi R8 LMS GT3, the R8 LMS GT4 and the RS 3 LMS. The test days provided information and background on fielding options and the brand’s service offering up to and including driving opportunities on the handling course. “We offered this event in Neuburg for the first time,” said Chris Reinke, Head of Audi Sport customer racing. “National and international race drivers and team owners, even including a guest from Hong Kong, took advantage of this opportunity and made this event a success.”