Links
{{ activeItem() }}
Twitter
08/09/20
From P12 to P6 for @LucasdiGrassi, scoring 8 pts. P16 @ReneRastRacing. Congratulations to @afelixdacosta &amp;… https://t.co/TQbZ3NwhJu
08/09/20
#BerlinEPrix at 19:04 CEST. You can still vote for #FANBOOST up to 15 min into the race. Watch &gt;&gt;… https://t.co/MstM6mIcSZ
08/09/20
“I was quite pleased with that result. First time in the top 10” – @ReneRastRacing after qualifying. Let’s hear mor… https://t.co/qXDyHmqKyv
08/09/20
1-2-3 victory: Audi Sport driver @vanthoordries1 and @weerts_charles (R8 LMS #32) repeated their victory from Satur… https://t.co/Ode4JQTh3h
Audi Sport on Twitter
{{ activeItem() }}
Facebook
08/03/20
What a start to the DTM season it was for Nico Mueller! Race victory and he is currently leading the drivers’ standings. See how he experienced the weekend in his latest #DriversDiary. >> audi.com/DTM #PerformanceIsAnAttitude #ThanksToDTM
08/03/20
Fourth victory for the Audi R8 LMS in just two weeks, adding to podiums and victories for the Audi R8 LMS GT4 and Audi RS 3 LMS this past weekend. 🇩🇪 🇮🇹 🇺🇸 🇫🇷 >> audi.com/GT3 >> audi.com/GT4 >> audi.com/TCR #PerformanceIsAnAttitude
08/02/20
Another podium lockout for us today! Check out how the second race at Circuit de Spa-Francorchamps has unfolded. >> audi.com/DTM #PerformanceIsAnAttitude #ThanksToDTM
08/02/20
Leading the pack. >> audi.com/DTM #PerformanceIsAnAttitude #ThanksToDTM
Audi Sport on Facebook 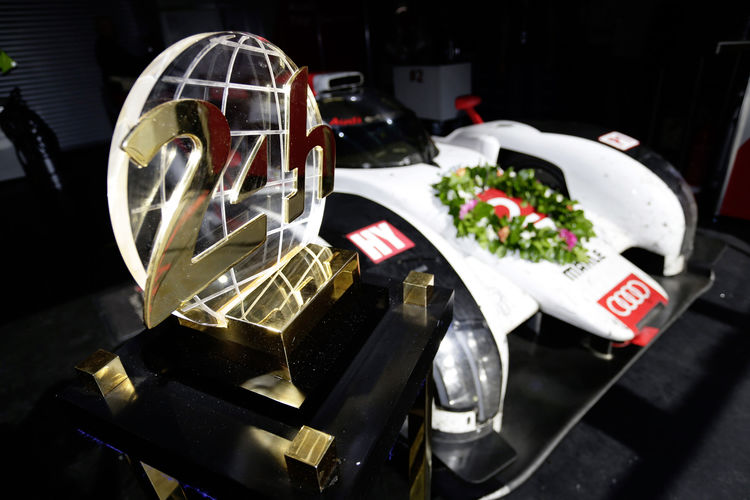 The wait is over: The Selection Committee of the Automobile Club de l’Ouest (ACO) has accepted all nominations submitted by Audi for the 83rd running of the Le Mans 24 Hours. As a result, three Audi R18 e-tron quattro cars will be competing in the world’s major endurance race on June 13 and 14, 2015, for which Tom Kristensen has been appointed as ‘Grand Marshal’ by the organizer.

The ACO published the entry list of 56 participants at its press conference in Paris. Thanks to its 13th victory at Le Mans last year Audi had previously been guaranteed a place on the grid in the LMP1 class. Last year’s winners Marcel Fässler/André Lotterer/Benoît Tréluyer (CH/D/F) are set on battling for their fourth victory this year in the number ‘7’ Audi R18 e-tron quattro.

For the limited number of available entries, the Selection Committee has now accepted the two other nominations submitted by Audi Sport Team Joest as well: Lucas di Grassi/Loïc Duval/Oliver Jarvis (BR/F/GB) will be tackling the iconic race in the number ‘8’ hybrid sports car. Filipe Albuquerque (P), Marco Bonanomi (I) and new signing René Rast (D) will complete the Audi line-up in car number ‘9.’

“We’re delighted that the ACO has accepted our three nominations,” said Head of Audi Motorsport Dr. Wolfgang Ullrich, who attended the event in Paris together with Chris Reinke, Head of LMP. “Audi will be competing at Le Mans for the 17th consecutive time and has been unbeaten with its hybrid drive so far. This year, we’re welcoming a new competitor. This provides further proof of the positive development that prototype racing and the FIA World Endurance Championship (WEC) have seen since 2012.”