Skip to content
We are using cookies for a better user experience.
08/19/19
Neuburg a. d. Donau
Motorsport 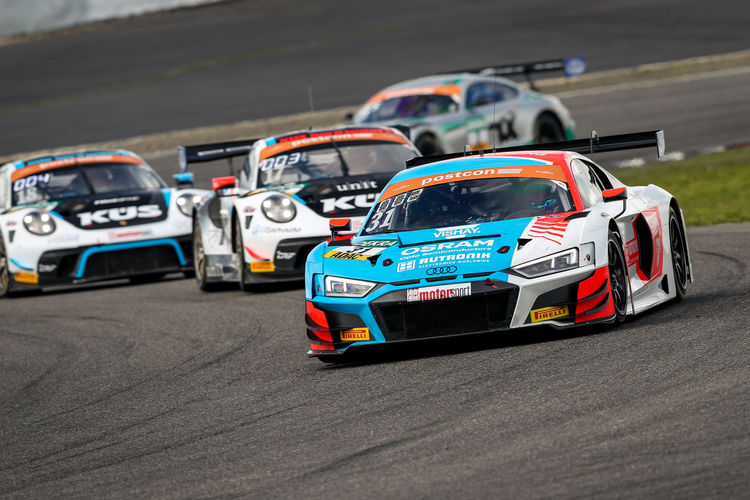 The drivers and teams from Audi Sport customer racing were happy not only in the ADAC GT Masters and the ADAC TCR Germany at the Nürburgring. A victory in Sweden and two podium finishes in Russia rounded out a successful weekend.

Big advantage: Team HCB-Rutronik Racing in the title race of the ADAC GT Masters at the Nürburgring managed to take a big step forward. Audi Sport driver Kelvin van der Linde and his Swiss teammate Patric Niederhauser had traveled to the Eifel with an 18-point advantage. As the best of the 13 driver squads from the circle of Audi Sport customer teams they clinched third place in both races in an Audi R8 LMS. Because their immediate rivals in the standings concurrently experienced a rather average weekend van der Linde/Niederhauser extended their advantage in the drivers’ standings to 40 points. At Hockenheim and at the Sachsenring, two double-header events are still coming up before the end of September. In the Juniors’ classification, an Audi driver is sitting in the top spot, too: Austrian Max Hofer from Team Montaplast by Land-Motorsport enlarged his advantage with a victory in this classification and a second place at the Nürburgring to 23 points ahead of his teammate Ricardo Feller.

Advantage extended: Antti Buri clearly expanded his advantage in the ADAC TCR Germany standings at the Nürburgring from twelve to 22 points. The Finn, driving an Audi RS 3 LMS from the AS Motorsport team, on the fifth race weekend at the Nürburgring achieved third place in the second race. Race control stopped the competition after eight laps due to heavy rain and did not restart the race. For the privateer, this marked the sixth podium finish this year. The 30-year-old Audi driver has now clinched three victories, one second and two third places and thus at least one trophy at each event.

Brink new runner-up in the standings after lights-to-flag win: Tobias Brink delivered an impeccable lights-to-flag victory on the fifth race weekend of the TCR Scandinavia. In the second race at Karlskoga, the Swede drove his Audi RS 3 LMS from pole position to his second victory this season. In total, Team Brink Motorsport has won five races with the Audi RS 3 LMS in its so far best season. In the championship standings, Tobias Brink has now overtaken his teammate Andreas Wernersson and is sitting in second place. He is separated from the top spot by 15 points and has a three-point advantage over Wernersson.

Two podium finishes in Russia: The Audi drivers stood on the podium twice on the sixth of seven race weekends in the TCR Russia. In the first race, Pavel Kalmanovich from Team Taif Motorsport had started from ninth on the grid. Even when rain set in at Moscow Raceway, he stayed on slicks in his Audi RS 3 LMS while some of his rivals switched to rain tires. The Russian was leading the race some of the time and in the end finished runner-up. In the second race, Klim Gavrilov from Carville Racing, in third position, was the best Audi driver. In third place of the standings, Gavrilov is now 18 points short of the top spot. The title decision will be produced in the finale at Sochi on September 7.

American premiere of the Audi R8 LMS GT2: Six weeks after its world premiere at Goodwood, England, the Audi R8 LMS GT2 made its American debut. At the Monterey Car Week on the California Pacific coast, the new race car from Audi Sport customer racing was one of the stars. On display at “The Quail” motorsport show, in the Concours d’Elegance at Pebble Beach and as a very fast race taxi on the racing track at Laguna Seca, Audi Sport customer racing’s most powerful model thrilled the large American sports car community. Hildegard Wortmann visited the prestigious event as Member of the Management Board of AUDI AG for Sales and Marketing. Le Mans legend Tom Kristensen presented the car throughout the weekend and during taxi rides of the Audi R8 LMS GT2 with selected guests created some unforgettable impressions. Starting in the 2020 season, the first GT2 racing categories in America, Europe and Asia will provide fielding opportunities for this new type of race car. In addition, gentlemen drivers will be able to enjoy unforgettable driving pleasure with the 640-horsepower model at Track Days and Race Resorts.