Thorough preparation of the Audi drivers for the Dakar Rally 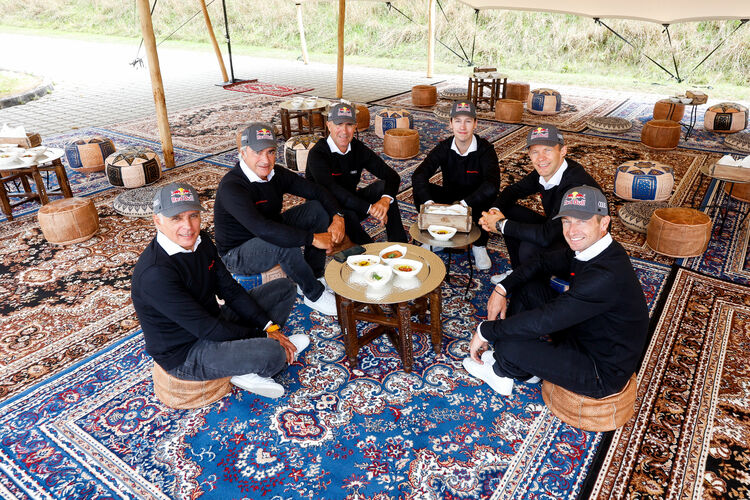 The 2023 Dakar Rally will start in just under eight weeks. Audi continues to rely on its strong line-up of Mattias Ekström/Emil Bergkvist, Stéphane Peterhansel/Edouard Boulanger and Carlos Sainz/Lucas Cruz. The six drivers and co-drivers are looking forward to the desert classic somewhat more relaxed and better prepared than a year ago, but also full of expectation and respect.

At the Morocco Rally in October, the three Audi Sport driver crews had a perfect opportunity to return to competitive rhythm. Stéphane Peterhansel and Edouard Boulanger have reeled off by far the most kilometers this year. After the Dakar Rally in January, they contested the Abu Dhabi Desert Challenge together – and clinched the Audi RS Q e-tron’s first victory there. Tests in Europe and Africa were followed by the Morocco Rally. Mattias Ekström saw an old experience confirmed there: “The processes are different in the race than in a test where you keep returning to your garage. In the desert, you’re on your own. That helps.” The most recent step came for the two Swedes at the Morocco Rally. “That’s when it ‘clicked’ and we understood how those who make the roadbook think,” reports Emil Bergkvist. “Since then, Mattias and I understand it better and rally driving is even more fun.”

Carlos Sainz with co-driver Lucas Cruz as well as Stéphane Peterhansel and Edouard Boulanger already know Team Q Motorsport from the time before Audi started the rally project. Sven Quandt’s experienced squad has been contesting desert rallies for almost three decades, has won the Dakar Rally six times and many titles in cross country rallying. Together with Team Audi Sport, the squad from Trebur fields all three Audi RS Q e-tron cars. A good relationship in the cockpit of the three prototypes is a prerequisite for success. “My trust in my co-driver is great, together we won the Dakar Rally three times. We help each other,” emphasizes Carlos Sainz, who is contesting the Dakar Rally together with Lucas Cruz for the eleventh time. His co-driver adds: “The communication with Carlos is really good. We have a strong partnership and there is a good spirit.” Stéphane Peterhansel, a regular competitor since 1988 and 14-time winner of the Dakar, last won the classic in 2021 with co-driver Edouard Boulanger. Mattias Ekström, as a two-time DTM champion and rallycross world champion an equally experienced and successful motorsports man, meets his driver colleagues with both respect and humor. “I can only learn from both of them,” says the Swede. “Carlos is extremely ambitious, emotional and full of energy. I learn everything else from Stéphane: He has just as much success, but is more composed, calmer and more strategic. They’re the two coolest teammates of my career.” His compatriot and co-driver Emil Bergkvist adds, “We learned a lot from Edouard and Lucas. They welcomed us with open arms. We asked them whatever we could. Without them, we would never have come this far.”

With the RS Q e-tron, Audi has realized an innovative concept in a very short time for the toughest motorsport discipline. Carlos Sainz, as a two-time World Rally Champion and three-time Dakar winner always a driver and technical perfectionist, praises his employer: “We told Audi: Don’t underestimate the Dakar. And they didn’t underestimate it. They trusted the direction in which we drivers wanted to develop the project. The success so far proves us right. It was the right approach by both parties.” Audi Sport set its first milestones on this path: four stage victories at the Dakar Rally in January, overall victory at the Abu Dhabi Desert Challenge in March, and the second construction stage of the desert prototype in September. “The new car is a big step forward in terms of reliability,” says Carlos Sainz. “But there are always surprises in our sport, including technical ones.” So repairs remain something that is sometimes unavoidable in the tough sport of off-road rallying – starting with punctures and continuing with accident damage and possible defects. “When it comes to repairs, I get good support from Stéphane,” says Edouard Boulanger. “He comes from motorcycle racing and knows how to use tools. As an engineer, I get a basic overview, but Stéphane helps me perfectly.” But it’s not just the two Frenchmen who know how to tackle the tasks. An in-depth technical training course at Audi Sport for all six drivers and co-drivers concludes the preparations in November.

Among the changes to the Dakar Rally for 2023 is a new mode on the stages: The previous neutralization zones with 15 to 20-minute breaks will now be eliminated. “Without these intermediate times on the road, we no longer know exactly where we stand compared to the competition,” emphasizes Mattias Ekström. For Carlos Sainz it’s déjà vu: “It’s like a return to the old days, because this used to be normal. Basically, we can tell the pace of our direct opponents, who are three minutes ahead or behind us, by whether or not one car catches up with the other.” Another challenge: The proportion of dune passages will increase significantly in 2023. “For me, driving in the dunes is easier,” says Edouard Boulanger. “I don’t have to give my driver as many directional indications. Navigation should also be easier. But on the other hand, the physical strain increases significantly because the car keeps bouncing in and out a lot.” His driver is also looking forward to the sand mountains: “I like returning to the Empty Quarter, and for four days. It will be a very authentic Dakar.” Carlos Sainz highlights another aspect. “The event has changed significantly over the past three years,” observes the Spaniard. “Now the hidden waypoints are eliminated and we follow the compass direction more closely. The Empty Quarter will be difficult, but Lucas and I are prepared.” Cruz advises, “In the dunes, however, the reference lines of other competitors are also missing. And it’s not exactly easy to drive a straight line through chains of dunes as required by a given compass direction.” No matter how tough the stages get, everyone agrees on one thing. “The temperatures are easy to handle with such a powerful air conditioning system as in the Audi RS Q e-tron,” says Stéphane Peterhansel, speaking on behalf of his colleagues.

Well set-up towards the desert

At the Morocco Rally, the driver teams put the finishing touches to the efficient RS Q e-tron with its electric drive and energy converter. “The pedal box is now located more favorably, and the steering wheel is also now perfectly positioned,” says Stéphane Peterhansel. Edouard Boulanger is also pleased: “The software logics are better, frequently used functions easier and quicker to reach.” Fellow co-driver Lucas Cruz also gains a lot from his new workplace: “The changed seating position gives us a better overview and we can read the instruments more easily.” Mattias Ekström, in turn, is impressed by his teammates’ off-road know-how: “Carlos has worked out a first-class basic setup for the chassis. Since Stéphane implemented the final fine-tuning, the car gives me even more confidence. Everything was already perfect when cornering, and now the rear doesn’t lift off so much in jumps either.”

“This year we are well prepared,” admits Stéphane Peterhansel. “We should drive consistently and not start too slowly, because otherwise you’ll be lagging behind. At the same time, I know what can happen in the Dakar. We have a competitive car, but also tough competition.” Carlos Sainz agrees: “You have to respect every single day. I expect a tough Dakar with longer stages, more hours in the cockpit and lots of variety.” Edouard Boulanger adds, “We remain cautious about the length of the stages. We have a limited energy supply with our innovative concept, and we have to pace ourselves.” Lucas Cruz feels reminded of the times when the rally went through South America. “We do extra fitness exercises because of the hardness of the stages in the Empty Quarter,” says the Spaniard. Emil Bergkvist starts the rally full of expectations, “It’s amazing to be part of this team. If you want something, they get it done for you. That gives us a good feeling.” His driver Mattias Ekström is putting an emphasis on personal preparation: “I can’t drink so much during the day, but I mustn’t lose weight. That’s why I’m taking a scale with me this time to check my fluid balance. In the time leading up to the start of the rally, the rule is: eat sensibly, sleep, drink enough and do a healthy amount of sport. And once the rally starts, we try to match our pace with that of Stéphane. There are few motorsport disciplines where luck plays an even bigger role. We did everything we could. Audi fulfilled all our wishes and there’s nothing left on Santa’s list.”