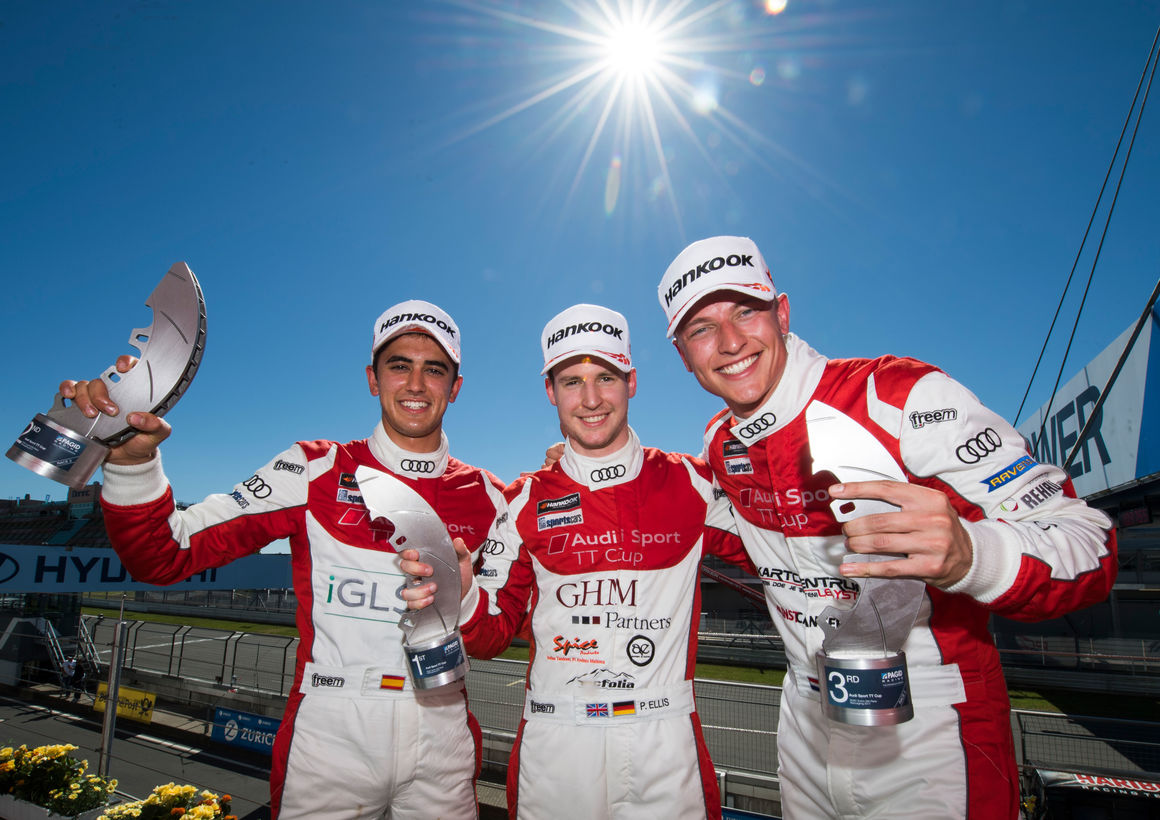 The Audi Sport TT Cup entertains the spectators once again: at the Nürburgring, Philip Ellis extended his table lead after crossing the finish line 0.267 seconds in front of the Spaniard Mikel Azcona.

Shortly before the start of the 24-hour race at the Nürburgring, the junior drivers once again proved their fighting spirit in the Audi Sport TT Cup on Saturday. Philip Ellis, who started from pole position, built up a small lead in the first lap of the race. However, in the fourth lap, Mikel Azcona overtook the Briton at the chicane under braking. Only a few hundred meters further on, Ellis struck back, taking the lead again with an audacious maneuver. Two laps later, the Swiss Yannik Brandt and the Scotsman Finlay Hutchison came together in a battle for fifth place. Hutchison crashed into the barriers, triggering a safety car period. After the restart, Ellis celebrated his third victory of the season. Mikel Azcona and the Dutchman Milan Dontje, in second and third, stood on the podium for the first time in the Audi Sport TT Cup. While Ellis has stretched his advantage at the top of the standings from eight to 17 points, Gosia Rdest remains second on the table. The Pole took fourth place at the Nürburgring. Yannik Brandt finished in front of Drew Ridge as the best-placed rookie in fifth.

Guest starter Johnny Cecotto delivered an eye-catching performance in the Eifel. The 61-year-old former motorcycle world champion, who still has many fans in Germany and has signed many autograph cards, reached seventh place. Behind him, Mike Beckhusen crossed the line after a strong fight-back. The 17-year-old German had started from 14th and fought his way through to eighth.

“We have just witnessed a very competitive race at the Nürburgring with many overtaking maneuvers,” said Chris Reinke, Head of Audi Sport customer racing. “The variety on the podium shows that we have a wealth of talent on the grid. This is how it should be – long may it continue.”

The round on Friday was not classified. After an accident involving Tommaso Mosca, race control brought the proceedings to a halt, as the track barriers were too badly damaged. By this point, only five laps had been completed, and therefore less than half of the designated distance.

After a break of five weeks, the races at the Norisring on July 1 and 2 are next on the agenda. The track in Nuremberg is the only street circuit on the calendar, and at 2.3 kilometers, it is the shortest as well.