Third pole position in a row for Audi 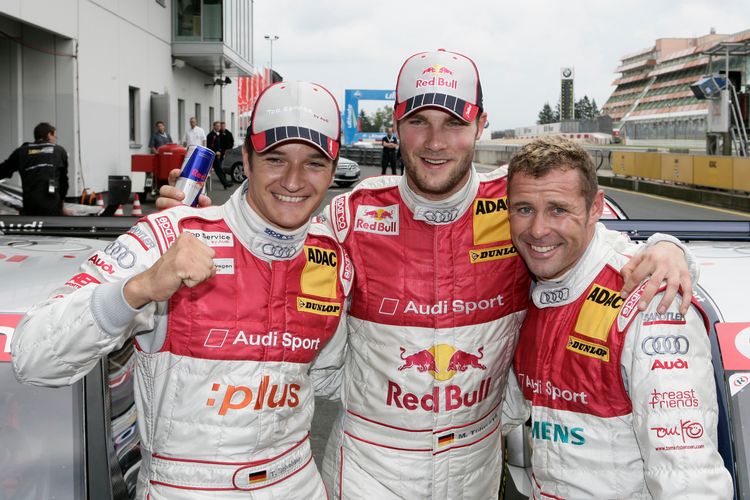 For the third time in a row, Audi secured the top three grid positions in the DTM. The qualifying thriller at the Nürburgring was decided for Audi by Martin Tomczyk, Timo Scheider and Tom Kristensen. The best Mercedes will go into the race on Sunday from fourth place (start at 3 p.m. local time / live broadcast on “Das Erste” from 2:30 p.m.). DTM leader Mattias Ekström will start from the fifth row.

In the three-part qualifying on Saturday thousandths of a second were crucial: with a lap time of 1m 23.197s, Martin Tomczyk managed to set another circuit record . Timo Scheider, who had started from the pole position at Zandvoort, was merely 13 thousandths slower. Another 73 thousandths behind him, Tom Kristensen clinched third place to complete the impressive qualifying performance of Audi Sport Team Abt Sportsline.

For Audi, it was the 37th pole position in the DTM, for Martin Tomczyk, it was the fifth altogether, and the first this season. This gives the 25-year-old the best starting base for the race among all the contenders for the title.

DTM leader Mattias Ekström, on the other hand, had to settle for tenth place on the grid. The Swede did not find a perfect set-up and missed the third qualifying session by 0.136 seconds.

Quickest driver of an A4 from last year was the Frenchman Alexandre Prémat (Audi Sport Team Phoenix) in twelfth position.

Dr Wolfgang Ullrich (Head of Audi Motorsport): “A very exciting qualifying with a very good result: three Audis are in front. Martin (Tomczyk) really drove a fantastic lap, but Timo (Scheider) and Tom (Kristensen) were close too. That was a strong team performance. Of course it’s a shame that Mattias (Ekström) didn’t come near this showing. We need to look into this. He wasn’t one-hundred-percent satisfied with the car. If you want to be all the way at the front in the DTM simply everything’s just got to be right.”

Martin Tomczyk (Red Bull Audi A4 DTM #4)
1st place, 1m 23.197s
“Things couldn’t have gone any better than this. After yesterday, we didn’t expect this at all. Even this morning we weren’t really sure whether we’d come up with the right set-up. Everything went perfectly. My thanks to the team. We changed something between session two and three again. The team said let’s try it – that was the right decision. It was exactly what we were lacking. A big thank you from me to the team. ”

Timo Scheider (Gebrauchtwagen:plus/Top Service Audi A4 DTM #8)
2nd place, 1m 23.210s
“A superb qualifying! Three Audis on the top three positions is a perfect result . Too bad that Mattias (Ekström) didn’t make it. Perhaps some small detail wasn’t one-hundred-percent. I’m extremely happy for Audi Sport and for Abt that the work of the past few weeks has paid off.”

Tom Kristensen (Siemens Audi A4 DTM #7)
3rd place, 1m 23.293s
“A very intensive qualifying – a bit too intensive if you ask me. I’m sorry for Mattias (Ekström). He would have deserved standing at the very front with us. The work with my engineer Franco and the mechanics was good. We hardly did anything to the car. I just tried driving better and better sector times. That’s difficult on this track because the tarmac is very slippery. Nevertheless, at the end, I was driving my best time. It’s nice being among the top three in qualifying – that’s a good base for the race.”

Mattias Ekström (Red Bull Audi A4 DTM #3)
10th place, 1m 23.923s
“Of course that’s not the result I’d been hoping for. We headed in the wrong direction with the set-up and my car had too much understeer. Sunday will now be very interesting.”

Alexandre Prémat (Audi Bank Audi A4 DTM #17)
12th place, 1m 24.093s
“I’m a bit disappointed about 12th place because I’d been hoping to make it into the third session. The drivers of the 2007-spec cars were really very quick today. But at least I’m the best driver of a 2006-spec Audi again. On Sunday we want to score as many points as possible with a good race strategy. Our car should be good in the race.”

Christian Abt (Playboy Audi A4 DTM #16)
15th place, 1m 24.365s
“Everything was okay but in the final turn I slipped a little and that cost me two tenths. It’s really too bad, we were only lacking a couple of hundredths for the next trial. Otherwise a better result would easily have been possible. I suppose that we’re in for a long and tough race tomorrow.”

Markus Winkelhock (Audi A4 DTM #20)
16th place, 1m 24.402s
“I’m not satisfied. However, I hadn’t expected a better result either after we were struggling in Free Practice already and didn’t come up with a proper balance. Maybe we’ll make a few more changes and try that during the warm-up on Sunday so that at least we’ll have a good set-up in the race.”

Mike Rockenfeller (S line Audi A4 DTM #11)
17th place, 1m 24.416s
“Yet again this year, I’m disappointed. I don’t know exactly what was wrong. I should have been one or two tenths faster. Unfortunately, I caught Markus (Winkelhock) on my first set of tyres during both trials. On the second set there was no more potential. So, out we are after the first lap. Of course that’s not very nice.”

Lucas Luhr (Philips Audi A4 DTM #12)
19th place, 1m 24.589s
“You could see that all Audis from last year were having a difficult time. On my first set of tyres already I had no grip whatosever. It seemed to me as though the tyre had not done any work at all. You can’t drive like that. That made it clear that the qualifying today would be over early for me.”

Hans-Jürgen Abt (Team Director Audi Sport Team Abt Sportsline): “In terms of suspense this couldn’t be topped. We really didn’t know before the qualifying where we’d stand in the end because it was about hundredths. I’m incredibly elated about the top three positions because this was one of the best results our team has ever achieved. Unfortunately, the leader of the Championship is a bit further towards the rear. I’ll give him a little pep talk so that he’ll drive a good race and and will clinch as many points as possible.”

Ernst Moser (Team Director Audi Sport Team Phoenix): “I’m not happy at all with this result. Christian (Abt) didn’t make it into the second, Alex (Prémat) didn’t make it into the third section. The first secion in particular was a problem for us. I don’t know yet why we were too slow then. We need to analyse this now. We had expected more. We had expected a result among the top eight but, obviously, we were overconfident.”

Arno Zensen (Team Director Audi Sport Team Rosberg): “We’re really puzzled. As far as the times went it was incredibly tight, we were just lacking a tiny bit. Before, I’d been relatively sure that we’d make it into the second group. But our cars were just slipping and sliding. We’re going to try and stop that. I’m disappointed.”