Skip to content
We are using cookies for a better user experience.
04/28/19
Budapest/Neuburg a. d. Donau
Sport

Links
{{ activeItem() }}
Twitter
02/27/21
MEDIAINFO: Formula E opener, part two: strong performance, meagre haul &gt;&gt; https://t.co/om2aFy3arY… https://t.co/tv3hFrhT8H
02/27/21
After a few post-race penalties, including @ReneRastRacing, our final positions are: P8 @LucasdiGrassi and P17 René… https://t.co/hipfjdCpkx
02/27/21
Time to race: #DiriyahEPrix starts at 20:03 local time (18:03 CET). Watch &gt;&gt; https://t.co/YfIrR1WG7O Timing &gt;&gt;… https://t.co/HYzcps2P9H
02/27/21
On the grid and ready for the second race in Diriyah. &gt;&gt; https://t.co/ktQ0jleme7 #FutureIsAnAttitude… https://t.co/uIorLKN3ij
Audi Sport on Twitter
{{ activeItem() }}
Facebook
02/27/21
We are saddened to hear the news about the passing of Hannu Mikkola, a longtime friend of Audi Sport and the World Rally champion with Audi in 1983. We send our sincere condolences to his family and friends.
02/26/21
Strong pace for the Audi e-tron FE07 in Diriyah: Fourth place for René Rast and Lucas Di Grassi moved forward seven places to ninth. Both cars in the points and tomorrow we race again. >> audi.com/FormulaE #FutureIsAnAttitude #DiriyahEPrix
02/25/21
Audi Sport ABT Schaeffler in the 2021 ABB Formula E World Championship. First-ever Formula E night races coming up on Friday and Saturday at 20:03 local time (18:03 CET). Broadcast info >> fiaformulae.com/watch #FutureIsAnAttitude #DiriyahEPrix
02/24/21
Three E-Prix so far in Diriyah since 2018 with our highlight in 2019: Lucas Di Grassi on the podium with a runner-up finish. Aiming for more this week in the first two night races in ABB Formula E history, February 26–27. >> audi.com/FormulaE #FutureIsAnAttitude #DiriyahEPrix
Audi Sport on Facebook 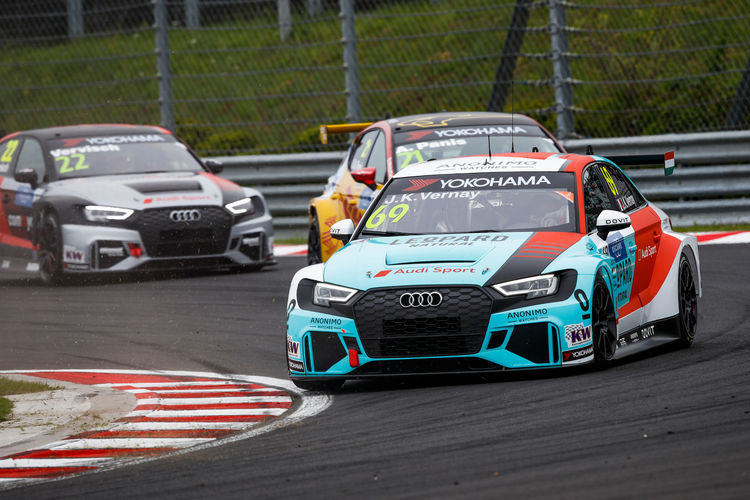 Audi Sport customer racing has demonstrated a significant boost in performance at the second round of the WTCR – FIA World Touring Car Cup. After achieving eighth place last year as the best result in Hungary, the Audi Sport squad has now returned with a trophy. This is the third cup so far this year and the 20th for the Audi RS 3 LMS since the FIA WTCR started in 2018.

Jean-Karl Vernay from the Leopard Racing Team Audi Sport matched his previous best result of the season at the Hungaroring. After claiming second place at the season-opening round in Morocco, he again climbed the podium at round two in Hungary. For this race, the Frenchman started from pole position on the reverse grid. Despite losing two positions after the start, he made up one spot to bring home second place. Previously, Vernay had fought his way through the field from eighth on the grid to fourth at the flag in race 1. Frédéric Vervisch also managed to make up the several places in the same race. Driving for Comtoyou Team Audi Sport, the Belgian improved from tenth to sixth place. Vernay concluded race three in tenth ahead of Vervisch on twelfth. This earned both Audi Sport drivers points in all three races in Hungary. As the best driver of an Audi RS 3 LMS, Vernay now ranks fifth overall in the 26-strong field.

Gordon Shedden, who had harvested points at all three races of the opening round in Morocco, looked on track to claim more points in Hungary. Putting in a spirited charge, the Scot from Leopard Racing Team Audi Sport went home empty-handed from the second round: The three-time BTCC champion had taken up the race from 25th on the grid and was running in eleventh place when he was shunted from the track by a tough maneuver and had to retire. Thus, Shedden earned no points in Hungary. The newcomer Niels Langeveld also had no chance to claim points – 18th place in the third race on the Hungaroring was the best result for the Dutchman.

“Last year, Hungary was our toughest weekend with our drivers earning only 17 points between them,” said Chris Reinke, Head of Audi Sport customer racing. “Our harvest of 54 points in 2019 was more than three times better. And the milestone of now 20 podium finishes for the Audi RS 3 LMS in just over a year is remarkable in such a fiercely competitive series as the FIA WTCR.”

In just two weeks, the world cup will be held on the Slovakiaring, with the fourth event contested a week later in Zandvoort, Netherlands.