Skip to content
We are using cookies for a better user experience.
02/04/18
Neuburg a. d. Donau/Bathurst
Motorsport 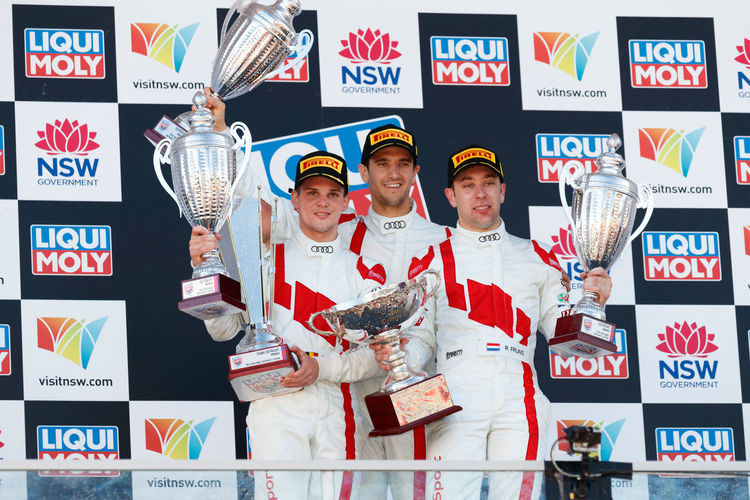 Audi Sport customer racing celebrated its third overall victory in the Bathurst 12 Hour after 2011 and 2012. On making its debut in Australia, Audi Sport Team WRT with campaigners Robin Frijns/Stuart Leonard/Dries Vanthoor (NL/GB/B) triumphed at the Intercontinental GT Challenge opener. As a result, Audi, as the title defenders in the drivers’ and manufacturers’ classifications of this series, managed a top-class start to the new season.

“Sincere congratulations to our winners and to Audi Sport Team WRT who delivered an incredible race,” said Chris Reinke, Head of Audi Sport customer racing. “They lost a lap at the beginning of the race, but never gave up, fought back and clinched a deserved victory.”

For Belgian Audi Sport Team WRT overall victory was the deserved reward following a remarkable comeback drive. The debut of Vincent Vosse’s team in the 12-hour race at Mount Panorama had begun with a number of setbacks. Radio communication issues in the early stage limited the squad’s strategic possibilities. The team opted for a repair, which meant a time loss, but proved to be exactly the right choice, enabling Robin Frijns, Stuart Leonard and Dries Vanthoor to attack again. A drive-through penalty for a violation during a yellow period cost the driver trio more valuable time, resulting in a temporary one-lap deficit for the number 37 Audi. However, Audi Sport Team WRT unlapped itself in a fightback combining clever tactics and strong driving skills. A thrilling three-way battle with Mercedes and Porsche with a gap of just a few seconds and the lead changing numerous times marked the final hours of racing. When the race was stopped by the red flag shortly before the end, Robin Frijns was leading with a 1.5-second advantage. As a result, Frijns and Leonard continued a string of success under the banner of the four rings. The year before, they had jointly won the Blancpain GT Series Sprint Cup with Belgian Audi Club Team WRT.

The reason for the red flag was an accident in which Ash Walsh was involved as well. The Australian privateer driver was sharing an Audi R8 LMS with his compatriots James and Theo Koundouris and with Duvashen Patayachee. They were on course for clinching amateur class victory when on lap 270 several participants crashed in the same place on track.

Audi Sport Team MPC had expected to have chances of clinching a good overall result as well. Kelvin van der Linde/Garth Tander/Frédéric Vervisch (ZA/AUS/B) were leading the race some of the time. However, a contact with the wall by Kelvin van der Linde required the left rear suspension to be changed. In the end, car number 22 saw the checkered flag with a large deficit. The sister car of Christopher Haase, Christopher Mies and Markus Winkelhock was battling in the pack at the front from the beginning. From the fifth hour of racing onward, the German driver trio repeatedly led the race, depending on the pit stop sequence. A broken left drive shaft in the eleventh of twelve hours of racing, though, destroyed all hopes.

Audi Sport customer racing thus managed a successful start to the 2018 season. In January, the Audi R8 LMS GT4 achieved a one-two GT4 class win in the 24 Hours of Dubai. Two weeks later, the Audi RS 3 LMS clinched a 1-2-3-4 result in the IMSA Continental Tire SportsCar Challenge at Daytona and now the GT3 version of the Audi R8 LMS triumphed at Bathurst.