The next historic success for Audi 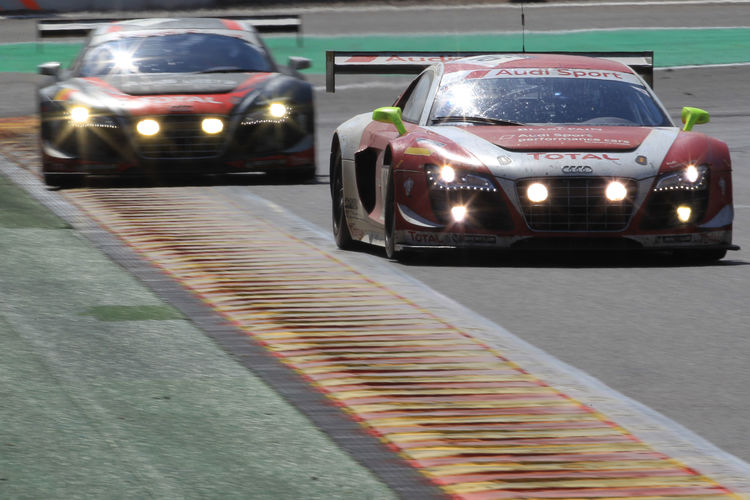 For the second consecutive time, the Audi R8 won the most important endurance race for GT3 sports cars – thus writing another chapter of motorsport history.

For the first time ever, an automobile manufacturer managed to decide the three most important 24-hour races in Europe in its favor: Nürburgring (D), Le Mans (F) and now Spa-Francorchamps (B) – within just 71 days.

The Le Mans winners Marcel Fässler (CH), Tom Kristensen (DK) and André Lotterer (D) in the second car of Audi Sport Team Phoenix after a spectacular recovery from position 63 finished in sixth place. The second Audi R8 LMS ultra of Audi Sport Team WRT with Marco Bonanomi (I), Edward Sandström (S) and Laurens Vanthoor (B) retired at the beginning of the 21st hour due to an accident in the famous “Eau Rouge” corner.

“Winning three 24-hour races within just 71 days is another milestone in the successful motorsport history of our company,” said Head of Audi Motorsport Dr. Wolfgang Ullrich after the historic triumph. “The field at Spa was unique and enormously competitive. There were more than 20 vehicles in contention for victory. In the end, the combination of quality, reliability and speed for which Audi is known prevailed yet again. Everybody who was involved in achieving this historic triple can be proud – first and foremost of course our teams and drivers, but naturally all of our employees in Ingolstadt, Neckarsulm and Biberach as well.”

After a difficult first race hour, the Audi R8 LMS ultra cars following a correction of the tire pressure managed to improve position by position and put pressure on the BMW cars that were initially leading. Audi started to gather its first leading kilometers in the fourth hour. From the ninth hour on, the Audi R8 LMS ultra cars took command of the field at Spa for good – and at times in extremely difficult conditions with torrential rain, minimal vision and a total of 16 safety car periods.

During the race the Audi drivers did not give each other the slightest break either. Up to 30 minutes before the end of the race, the two Audi R8 LMS ultra cars – numbers “16” and “1” – of the two Audi Sport Teams Phoenix and WRT were fighting a fierce duel for overall victory. The lead kept changing between the two cars. The overtaking maneuver that pre-decided the outcome was achieved by Frank Stippler shortly before 3 p.m. In addition, the strategy of Audi Sport Team Phoenix to change the front brake pads a second time on Sunday morning during a safety car period proved to be right. The final decision was made 30 minutes before the end of the race when Stéphane Ortelli had to sit a drive-through penalty.

“Like at the Nürburgring 24 hours, despite the enormously high speed as in a sprint race we didn’t have the slightest technical problem,” said a pleased Werner Frowein from quattro GmbH which is responsible for the development and sales of the GT3 sports car. “This triumph is another piece of proof that the R8 LMS ultra is the bench mark on the endurance circuit.”

Marcel Fässler, Tom Kristensen and André Lotterer, who were among the quickest drivers in the field, were able to see the qualities of the mid-engine sports car for themselves as well. Shortly before the end of the first hour, Lotterer was hit by another vehicle that suddenly turned into the pit lane. After changing the tie rod on the front axle the Le Mans winners resumed the race with a gap of eleven laps on position 63. In the end, they had pushed forward to position six and made up three laps.

As the best Audi customer team, the British GT3 Racing squad with their Audi R8 LMS achieved a remarkable 14th place overall and ninth in the Pro Am class. “And right in our first 24-hour race and only our fourth running of this car,” said Team Director Aaron Scott, positively summing up the race.

Teams Sainteloc Racing, JB Motorsport and Alfab finished with their R8 LMS cars as well. The R8 LMS ultra cars from Sainteloc Racing and United Autosports retired due to accidents. The French Sainteloc squad was running in the sensational fifth place overall some of the time.