The book on 30 years of Audi Sport 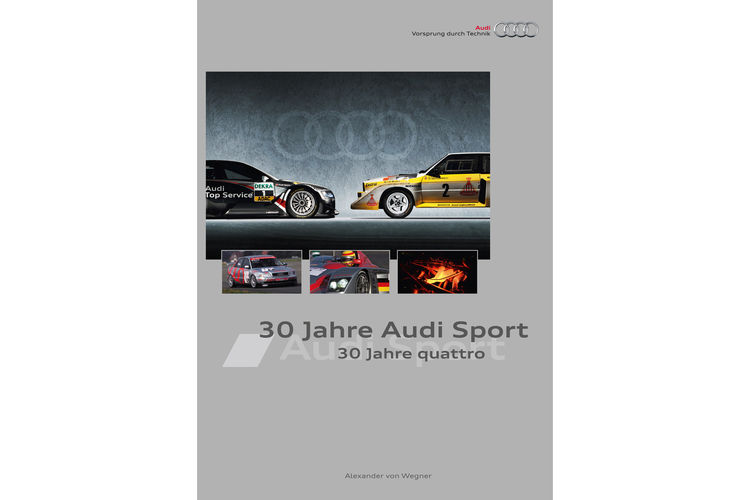 Motorsport has always been a means for Audi to develop forward-thinking and efficient technologies which are relevant to customers as well. For 30 years, Audi Sport has been making history in the world of motorsport. Now a fascinating book presents this history to readers: “30 Years of Audi Sport – 30 Years of quattro” will be available from mid-April in German and English.

It is no coincidence that Audi Sport and the quattro celebrate a common anniversary in 2010: in 1980, the first Audi quattro marked the beginning of the successful motorsport history of the brand with the four rings which author Alexander von Wegner describes in detail in the 208-page volume. His research took him into the depths of the Audi archive. In addition, he interviewed all of the former top managers of Audi Sport and many well-known driver personalities from all of the different eras. The current Head of Audi Motorsport, Dr. Wolfgang Ullrich, has contributed extensive information as well.

The work represents the first comprehensive appraisal of Audi Sport’s history. Each era is analyzed and illustrated by a total of 400 mostly colored pictures some of which have not been published before – including a unique historic document that shows the first twelve employees of Audi Sport in front of the former supermarket on the (then) Ringlerstrasse in Ingolstadt which is still home to the Audi Sport department today.

All of the race vehicles were developed there – from the original quattro that was later renamed into “R1” all the way to the current Audi R8 LMS that bears the internal project name “R16.” All vehicles are depicted in detailed, large-sized graphical representations and schematic drawings that bring back memories of Audi Sport’s most spectacular inventions.

Whether quattro drive, light-weight design or the combination of turbo-charging and direct injection (TFSI) – many of the technologies that are standard in Audi production models today were tested in motorsport.

Comprehensive statistics reflecting the results of all “factory” commitments over the past three decades complement the work. The introduction to the book was written by Head of Audi Motorsport Dr. Wolfgang Ullrich.

“30 Years of Audi Sport – 30 Years of quattro” will be available from April 12, at bookstores and from an online ordering facility for 29.90 euros (including VAT).