The Audi A5 DTM: a high-tech jigsaw puzzle consisting of over 4,000 parts 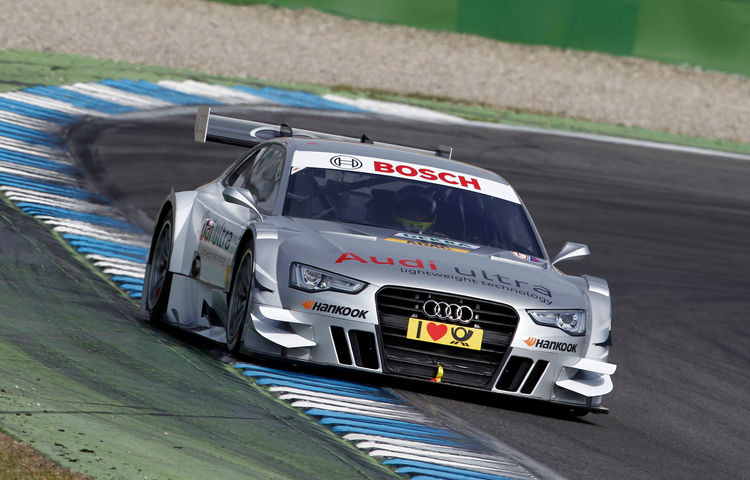 Suspense is building – among the fans and at the team of Audi Sport. In just three weeks from now the 2012 DTM will start at the Hockenheimring, which marks the beginning of a new era for the popular racing series.

V8, TT, A4 – each of the three model ranges with which Audi has previously competed in the DTM ultimately won at least one title. After eight successful years with the A4, the brand with the four rings is banking on a two-door coupe for its factory commitment in the most popular international touring car racing series for the first time: the A5.

The three long-standing Audi Sport teams, Abt Sportsline, Phoenix and Rosberg, are fielding a total of eight new Audi A5 DTM cars – which means that Audi Sport will be setting an internal record even before the first race, as such a large number of new vehicles has never before been built for a new DTM season. In 2004, on Audi’s return to the DTM with a factory commitment, there were six vehicles. Afterwards, a maximum of four new race cars were built per year.

In 2012, there will only be new cars in the field – for the first time ever since the DTM’s re-launch in 2000. “Developing a new race car for a new set of Technical Regulations and then duplicating it eight times and assuring the supply of spare parts in the process is a very difficult logistical challenge. This feat could only be achieved by a major effort of the whole Audi squad,” explains Head of Audi Motorsport Dr. Wolfgang Ullrich. “I’m convinced though that this will pay off, as we’ve got the chance to turn the DTM into the world’s best touring car series this year.”

All three factory teams were involved in the development and track tests of the new Audi A5 DTM right from the beginning and will thus start into the new DTM era with equal opportunities. From the first track tests at the Lausitzring on September 12, 2011 through to the homologation of the A5 DTM on March 1, 2012, they formed a test team together with Audi Sport that reeled off around 30,000 test kilometers.

Assembly of the race cars at Audi Sport in Ingolstadt

Assembly of the race cars was begun afterwards at Audi Sport in Ingolstadt – performed by the mechanics of the teams. “This way, they’re able to familiarize themselves with even the minutest details of the new cars and are acquiring a certain routine even before the first race,” says Dr. Martin Mühlmeier, Head of Engineering at Audi Sport. An Audi A5 DTM consists of around 4,000 single parts. It takes five people to assemble one vehicle in a little less than two weeks. In the background, the specialists from Audi Sport take care of the required quality assurance, logistics and pre-assembly of various component units.

Up to four DTM vehicles can be simultaneously assembled at Audi Sport, in other words one each per two-car team. The assembly process starts with the installation of the monocoque, one of currently 59 components which are identical for all DTM vehicles of the three manufacturers. Then the front end with the engine, the front crash structure and the rear end including the clutch, transmission and the rear crash structure are “married” with the chassis. “This requires extreme care,” stresses Stefan Aicher, Head of Vehicle Design at Audi Sport. The smallest inaccuracy that occurs while putting together the pieces of this high-tech jigsaw puzzle can jeopardize the “title defense” project.

The finished assembly of the total of eight race cars does not mean that the preparations for the season have been completed though. The spare parts have to be produced and, to some extent, pre-assembled into component units as well. “The logistical effort that is behind the DTM’s re-launch is huge,” says Stephan Köster, Project Manager DTM. When all the cars are on the grid at Hockenheim at 2 p.m. on April 29 (live on “Das Erste”) Audi Sport will already have won the first race – the one before the first race.

Tickets for the 2012 DTM are available at the Audi Ticket Shop on the internet at www.audi.de/dtm.