The 2013 DTM Champion drives an Audi 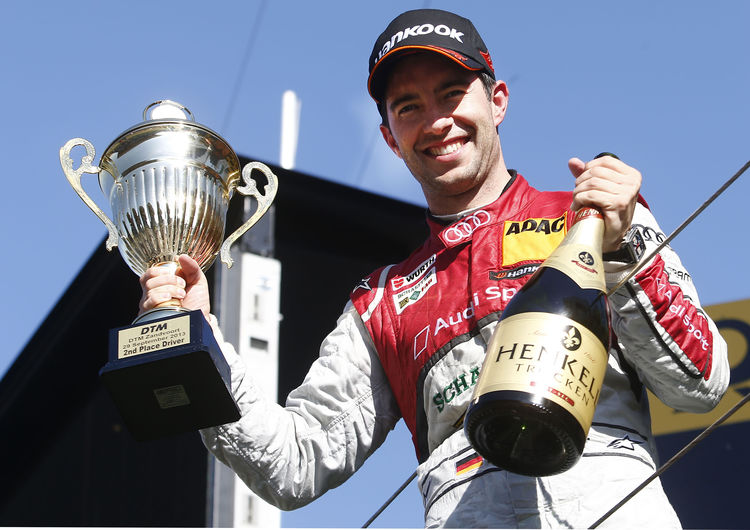 The DTM Champion of the year 2013 drives an Audi. At the penultimate race of the season, Mike Rockenfeller in the Schaeffler Audi RS 5 DTM secured an early win of the drivers’ title in the prestigious touring car racing series in front of 41,000 spectators (throughout the weekend). At the same time, Audi and Audi Sport Team Phoenix took the lead of the manufacturers’ and team standings.

“Audi is providing the DTM Champion for an amazing ninth time and for the fifth time in seven years. This provides proof yet again of ‘Vorsprung durch Technik’ and the powerful performance of our RS models,” commented the Chairman of the Board of Management of AUDI AG, Rupert Stadler, who, like his management board colleague Dr. Ulrich Hackenberg, was keeping his fingers crossed for Mike Rockenfeller on location and subsequently joined the celebration in the pits. “We’re competing against two of our strongest competitors in the DTM – the success, which every ‘Audian’ can be proud of, has corresponding value.”

Before the finale at the Hockenheimring, Rockenfeller has a 26-point advantage and is thus ranking at the top of the standings, out of reach by any rival. The starting lap, on which Rockenfeller overtook the BMW of pole setter Marco Wittmann and thus advanced to the second place he needed for his early title win, produced a preliminary decision at Zandvoort. Following the successful attack against the leading BMW of his title rival Augusto Farfus while running on option tires, he concentrated, after switching to the harder standard tires, on safely bringing home second place – assisted in the process by his brand colleague Timo Scheider, who let Rockenfeller pass after his second pit stop and subsequently backed him. Rockenfeller mastered a safety car period shortly before the end of the race and a restart before the last lap in his typical, commanding manner as well.

“Winning the DTM title one race before the end of the season is fantastic. I think it’ll take me a while to realize what we managed to do,” said the new DTM Champion after the race. “I’d like to thank Audi, Audi Sport Team Phoenix and Timo (Scheider) as well, who helped me today, very much. On option tires, I was very fast at the beginning of the race but after Augusto’s first stop not fast enough anymore. After switching to standard tires, it wasn’t going quite as well anymore but it was still enough in the end. I’m very proud of Audi and the team. After the difficult last year, we worked hard in the winter and improved the car. Being consistently quick and to score points was the key to success.”

Timo Scheider in the AUTO TEST Audi RS 5 DTM of Audi Sport Team Abt Sportsline, in third place, managed to clinch his first podium result of the season on his favorite track. The two-time DTM Champion switched from standard to option tires early and, by using this strategy, moved in front of Rockenfeller and Wittmann. After letting his brand colleague go ahead, Scheider concentrated on shielding Rockenfeller toward the rear.

A fast-and-furious race was driven by Mattias Ekström in the Red Bull Audi RS 5 DTM, who saved the softer option tires for the final attack and battled his way forward position by position with spectacular overtaking maneuvers. On the final lap alone, the Swede made up three places and thus secured fourth place.

Adrien Tambay (Audi ultra RS 5 DTM), Filipe Albuquerque (Audi Financial Services RS 5 DTM/Audi Sport Team Rosberg) and Miguel Molina (Audi RS 5 DTM), by claiming positions six, eight and ten, contributed their share to Audi, with a score of 325 points, taking the lead in the manufacturers’ standings as well, in front of BMW (317) and Mercedes-Benz (239). In the team classification, Audi Sport Team Phoenix has a three-point advantage over BMW Team RBM before the finale.

“Congratulations and a sincere ‘thank you’ to Mike (Rockenfeller), Audi Sport Team Phoenix and the entire Audi squad!” said Dieter Gass, who has been Head of DTM at Audi Sport since the 2013 season. “Mike secured the drivers’ title early. In the manufacturers’ and team standings, we’re now in front as well. You really can’t wish for more than that. Mike’s a worthy Champion, who made no mistakes today even under high pressure. Timo (Scheider) backed him and deserves having clinched his first podium this season. The recovery by Mattias (Ekström) was sensational as well. There are many reasons for celebrating tonight – and that’s what we’re definitely going to do. ‘Thank you’ also to everyone in Ingolstadt and Neckarsulm, with the teams and with the suppliers who have made this DTM title possible for Audi.”