The 2004 season in review: for Audi a year crammed with highlights 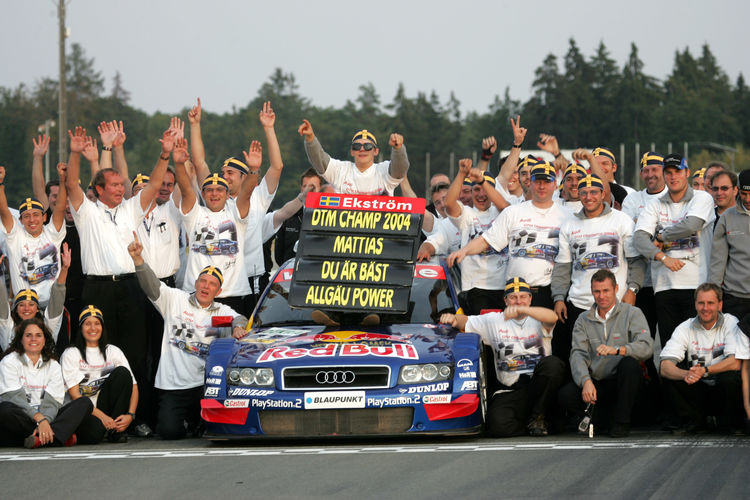 2004 was one of the most successful years for AUDI AG, and one of the most successful in the marque’s long motorsport history. The successful DTM comeback with victory in the Drivers’, Manufacturers’ and Teams’ Championships and the fourth Audi R8 win at the Le Mans 24 Hours were just two of many highlights. In the American Le Mans Series (ALMS) the title defence was a success, and in the new Le Mans Endurance Series (LMES) the Audi R8 is, till now, unbeaten. The Audi A4 STCC won the Finnish Touring Car Championship. Audi USA clinched the SPEED GT World Challenge Manufacturers’ Championship with the RS 6 Competition for the second time in succession.

DTM: The works DTM comeback could hardly have been more successful. In the first year of their comeback in Europe’s most popular touring car series Audi won all three titles at the first attempt with the A4 DTM. With four pole positions and four wins, Mattias Ekström was the most outstanding driver and was already declared
DTM Champion one race before the end of the season. Audi Sport Team Abt also won the Teams’ Championship, at the Hockenheim finale Audi also secured the Manufacturers’ Championship, so making the total triumph perfect. Tom Kristensen ended the season as best DTM newcomer, Martin Tomczyk as best placed German.

24h Le Mans: Following 2000, 2001 and 2002, Audi celebrated their fourth triumph at the Le Mans 24 Hours. The race was completely dominated by the fight between the Audi importer teams from Great Britain, Japan and the USA, who chased each other all the way to the flag and set a new distance record as a result. The victorious Audi Sport Japan Team Goh Audi R8 completed 379 laps (5169.970 kilometres) and therefore exceeded the previous record by four laps in front of approximately 200,000 spectators.

ALMS: Audi remains unbeaten in the American Le Mans Series (ALMS) and in the 12-hour race at Sebring. For the fifth time in succession Audi secured the Manufacturers’, Teams’ and Drivers’ Championships in the leading prototype category and overall victory at Sebring. In eight of the nine races, an Audi R8 crossed the finish line as winner during 2004 season. Audi works driver Marco Werner was the first driver ever in the North American sportscar series’ “Top Class” to successfully defend his title. After he had won the ALMS last year together with Frank Biela, he formed a strong duo with JJ Lehto in 2004 for Team ADT Champion Racing, who won the ALMS title for the first time.

Audi R8 unbeaten in the LMES

LMES: There was no beating the Audi R8 in the newly created Le Mans Endurance Series (LMES). Audi Sport UK Team Veloqx won all four races of the European sportscar series. Jamie Davies/Johnny Herbert and Pierre Kaffer/Allan McNish each won two races, the two teams fighting it out among themselves for the Drivers’ title. Davies and Herbert clinched the title at the finale in Spa-Francorchamps, at which they also presented the Audi R8 with its 50th win in 60 races.

STCC: After winning the Swedish Touring Car Championship (STCC) in the 2003 season with the KMS Motorsport Audi A4 STCC, Fredrik Ekblom was again one of the most successful drivers of the year. The Swede won two race and finished third overall in the championship.

Successful title defence in the USA

SPEED GT: Audi succeeded in retaining the title in the SPEED GT World Challenge. Audi won the manufacturers title in the North American GT series for the third time. With a mere six point deficit, Michael Galati clinched, as best Audi driver, the runner’s-up spot in the Drivers’ classification. The Audi RS 6 Competition won four of the ten races, despite being artificially slowed down by the championship organisers with new handicaps.

Both Abt-Audi TT-R cars in the top ten

24h Nürburgring: At the 24-hour race around the Nürburgring, the two Abt-Audi TT-R cars finished in fourth and eighth positions despite the extremely difficult conditions that caused numerous incidents. In changeable weather conditions the two TT-R cars matched the fast pace of the leaders and impressed with their mechanical reliability. Throughout the entire 24-hours no unscheduled repairs were made.