“Super Sunday” for Audi in the DTM at Brands Hatch 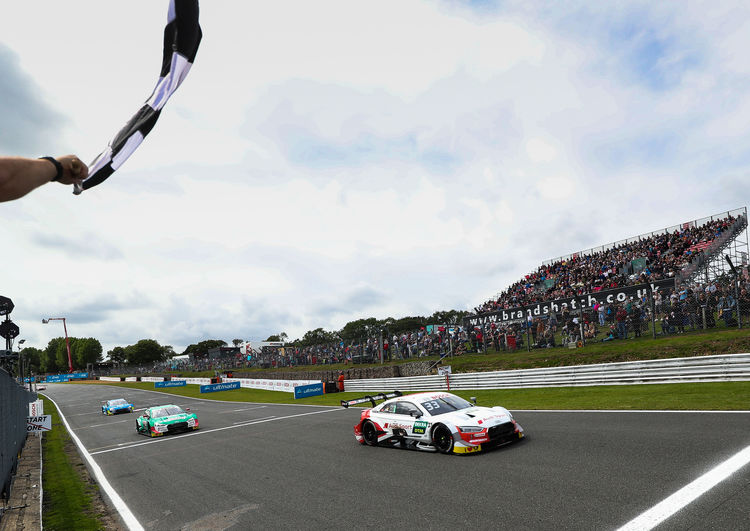 A 1-2-3-4 success, maximum points scored, a historic result in qualifying, the lead in all three championships of the DTM extended: Audi achieved a true “Super Sunday” at Brands Hatch.

The organizers of the British DTM race had promoted the second race as “Super Sunday” and in doing so attracted thousands of spectators to the tradition-steeped race track on the outskirts of London. As early as in qualifying, they witnessed an impressive demonstration of the strength of the Audi RS 5 DTM. All eight Audi drivers clearly improved compared to the day before and secured the top eight spots on the grid. The DTM had only seen eight cars from the same brand at the front of the grid once before: 2016 in Budapest, also by Audi.

The squad around Head of Audi Motorsport Dieter Gass converted the dream result in qualifying into the first 1-2-3-4 success achieved by an automobile manufacturer in the new turbo era of the DTM. As a result, Audi, in the manufacturers’ championship, scored the maximum number of 76 points that are possible on one race day.

In the drivers’ championship, René Rast, on clinching his fifth pole position and fourth victory this season, extended his lead of the standings. The driver from Audi Sport Team Rosberg secured the top spot on the grid with an advantage of nearly three tenths of a second and started from the top three for the tenth time in succession. The only concern of the 2017 DTM Champion: because a front tire of his Audi RS 5 DTM was damaged by stones in the parc-fermé, he had to drive his second stint on a mixed set of tires.

“Pole position was clearly the key to success today,” Rast said after clinching the 14th victory in total of his DTM career. “My pace in the race was okay, but not superior. Scoring the maximum number of points and clinching victory from pole for the first time this year anyhow is fantastic.”

By finishing in second position, Nico Müller from Audi Sport Team Abt Sportsline consolidated his second place in the standings. “I didn’t have a good qualifying today either,” said the Swiss. “On my second set of tires, I hit traffic. That’s why the result was only sixth place. In the race, we were fast, but I lost the chance of battling for victory with René due to a slow pit stop. Even so, I’m happy about the good points scored this weekend.”

The podium was completed by Robin Frijns, who the day before had inhaled emissions due to a defect on the exhaust system and woke up with headaches on Sunday. “The race today was good, my car was superb,” said the Dutchman. “After a mediocre start, I was running behind Loïc (Duval) in fourth position. I had the feeling of being a little faster and overtook him after the pit stop. After that, I actually just watched my tires.”

Loïc Duval from Audi Sport Team Phoenix, in fourth position, perfected Audi’s 1-2-3-4 success. In the last third of the race, the Frenchman managed to defend himself against the vehement attacks by BMW driver Philipp Eng, although Eng had pitted later and was running on clearly fresher tires. Duval’s teammate, Mike Rockenfeller, finished sixth, shortly behind Duval and Eng.

Jamie Green again scored no points in his home round on Sunday. Having started from the second row, the Briton lost chances of a good result due to a 5-second penalty because at the start his Audi RS 5 DTM was not exactly within the start box. The subsequent two-stop strategy did not pan out for Green.

Audi’s customer team WRT Team Audi Sport went home without points on Sunday. Jonathan Aberdein lost a possible seventh position due to a spin shortly before the end of the race. For Pietro Fittipaldi, a two-stop strategy did not work out either. Remarkably, after his heavy accident on Saturday, his mechanics had repaired the Audi RS 5 DTM overnight.

“For Audi, it was truly a ‘Super Sunday’ today,” said Head of Audi Motorsport Dieter Gass. “It already started with the top eight spots in qualifying. In a situation like this, you always worry that you can only lose in the race. But everything went well. We’re in the middle of the title race, tried to help René and Nico as best we could and focused our strategy on Marco Wittmann. That worked well. In the end, the situation got close with Philipp Eng, who was running on fresher tires and kept us on edge. But Loïc did a great job of defending himself. As a result, we managed to get four cars to finish in the top four spots. That’s a fantastic result! ‘Thank you’ to all who made this success possible.”

The DTM continues on August 24 and 25 at the Lausitzring. At the circuit some 100 kilometers south of Berlin, the DTM will celebrate its 500th race on Sunday.