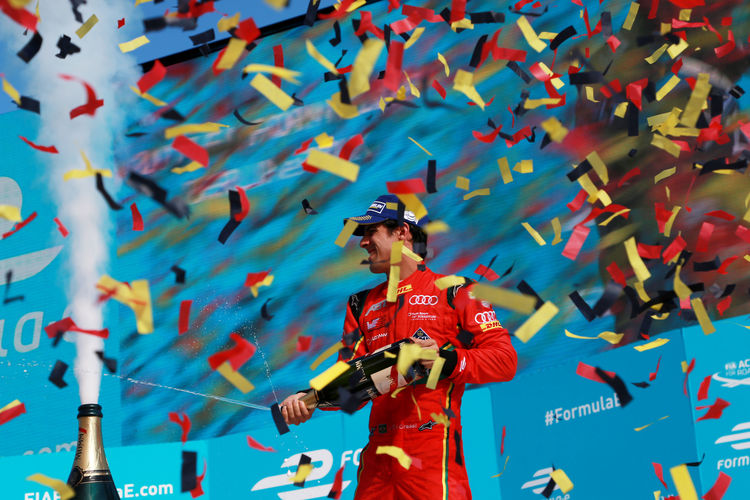 One pole position, two podiums and 56 points in total: Team ABT Schaeffler Audi Sport inspired the fans with its strong outing at the home Formula E race on the former airport in Berlin-Tempelhof.

For the first time this season, two identical race days were completed on Saturday and Sunday – both with qualifying and race. Lucas di Grassi ensured the first highlight as he claimed the three points for pole position on Saturday with Audi Chief Development Officer Peter Mertens looking on. In the race, the Brazilian, who had led commandingly for many laps, lost the lead just before half-distance as he had to slow his pace due to temperature problems with the battery, but nevertheless defended second place. Team mate Daniel Abt finished sixth after starting eighth on the grid.

24 hours later, di Grassi only started from seventh, but with the Berlin public cheering on in even hotter temperatures than the previous day, fought his way up to third place. With a haul of 36 points in Berlin, di Grassi reduced the deficit to championship leader Sébastien Buemi by eleven points to 32 points.

Di Grassi was followed closely throughout the entirety of Sunday’s race by team mate Daniel Abt, who improved from eighth on the grid to fourth and clinched his best result of the season thanks to his strong home race showing. The 24-year old German contributed 20 points of the 56 points scored this weekend by ABT Schaeffler Audi Sport, which also made up ground to the leaders Renault e.dams in the teams’ classification.

What are your thoughts on the weekend?
Lucas di Grassi: “It was a fantastic weekend. I took 36 points, two podiums and one pole position – all this at the home race for ABT, Audi Sport and Schaeffler in front of a fantastic backdrop. The whole event in Berlin was fantastically well organized and the new track layout was perfect. Renault and especially Mahindra were a little faster, with this in mind we extracted the maximum from our opportunities.”

You arrived in Berlin with an injury to your right ankle – the result of an incident playing in a football benefit match in Chelsea. You were seen hobbling in the paddock. Did the injury hinder you?
“Luckily it was the throttle foot. No, the injury had absolutely no influence whatsoever when driving, I didn’t notice anything in the car. Just the car change was difficult, but we managed it fantastically well.”

On Saturday you took your second pole position of the year – by the smallest margin ever seen in Formula E …
“A thousandth of a second from ‘Pechito’ Lopez – it was unbelievably close. In free practice it didn’t look so good, but in qualifying I put a good lap together. And my lap in super pole was perfect. To start from pole in front of the team’s home crowd was fantastic.”

Why was ‘only’ second place in the race possible after having initially held the lead?
“We didn’t have the best set-up, but especially problems with the battery temperature.”

On Sunday it was even hotter in Berlin, did the problems reappear?
“No. The team and Audi did an excellent job and got on top of the temperature problem. We also had a better set-up and were generally faster than on Saturday – this enabled me to move up from seventh on the grid to third. I had some great battles and it was a lot of fun. Throughout all this Daniel (Abt) was right behind me. He also drove a fantastic race.”

Events continue in New York on July 15–16. Spectators – as in Berlin – will enjoy a race on Saturday and Sunday on the track built specially in the harbor quarter of Brooklyn. Are you looking forward to the premiere in the US metropolis?
“I’m really looking forward to it. I’m really intrigued about the circuit. We’ll again be on maximum attack there and will try to get the best possible result.”