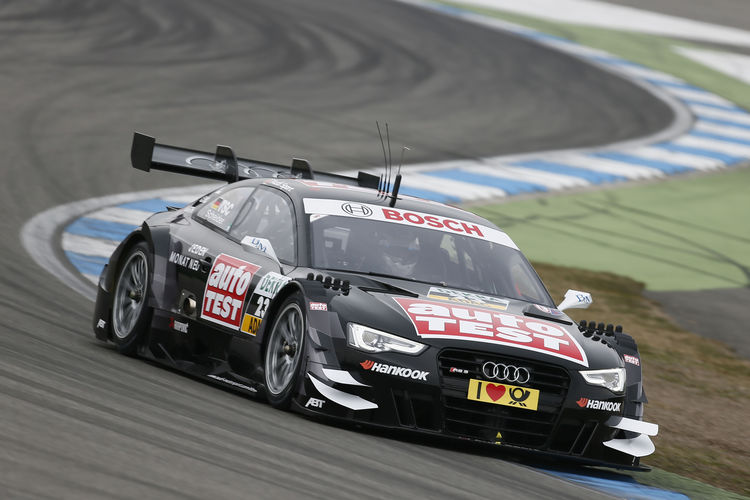 Audi has successfully completed the ‘dress rehearsal’ for the DTM season opener on May 5. At Hockenheim, the eight Audi drivers primarily gathered experiences in changeable conditions and were able to continue to familiarize themselves with the new technical elements that will make for an additional thrill in the DTM in 2013.

Eight drivers, four cars, 7,500 kilometers: Although the track conditions during the four test days at the Hockenheimring constantly changed between wet, drying and dry the teams and drivers took important findings with them into their final sprint of preparing for the season. Audi Sport and the Audi Sport Teams Abt Sportsline, Phoenix and Rosberg are now going to prepare the Audi RS 5 DTM cars for their first racing commitment this year based on the gathered data and information provided by their drivers.

Following the confirmation of the final details of the regulations, one of the obvious aspects the drivers focused on was further testing with the Drag Reduction System (DRS), which makes it possible to adjust the rear wing flap by depressing a button on the steering wheel. Together with the option tires, this gives the teams and drivers two tactical components which make overtaking on the track easier and provide the strategists at the pit wall with additional possibilities.

The quickest Audi driver at Hockenheim was Miguel Molina, who achieved a time of 1m 33.242s on a dry track on Wednesday afternoon. The Spaniard, who completed 237 laps on the 4.572-kilometer circuit, was the busiest Audi racer as well. In total, the eight drivers reeled off 1,642 laps. The only minor setback was an excursion by Edoardo Mortara, who slid off the partially wet track on Thursday afternoon. The RS 5 DTM could not be repaired on location, so Mike Rockenfeller and Filipe Albuquerque shared a car on Friday. The three DTM brands will meet again at Hockenheim the next time: for the first real comparison of strengths in the season’s first free practice on Saturday, May 4.

Quotes by the Audi drivers

Filipe Albuquerque (170 laps/1m 33.897s): “Unfortunately, the weather didn’t always cooperate here at the final test at Hockenheim. I was able to drive just a few laps on a dry track but that was enough to tell me that we’ve made progress with the detailed work on the Audi RS 5 DTM compared with last year’s model. The car has better balance and is more pleasant to drive. Now I’m dying to switch from the test car to my real race car and am eager to see how fast we’ll actually be at the Hockenheim season opener compared with the competition.”

Mattias Ekström (223 laps/1m 34.922s): “The tests are over now. The next time we’re on track with the guys from BMW and Mercedes the first real race weekend will have started and nobody can play poker or use tactics any more. The week here at Hockenheim was a nice conclusion of a long winter with lots of work. The cooperation within the team and with Audi is a lot of fun. My new race engineer, the option tires and DRS make for additional excitement and variety. Now I’m looking forward to the first weekend in May and hope that spring will have finally arrived in Germany by that time.”

Jamie Green (207 laps/1m 34.829s): “Aside from the weather, which of course we had no control over, we had a successful test. The collaboration with my race engineer Alex (Stehlig) is already working out really well, we had interesting days together. I feel absolutely comfortable in the Audi RS 5 DTM. As far as the relative strengths in comparison with the other guys are concerned, we’re still going to travel to Hockenheim with a few question marks because we were rarely running in the same conditions. DRS and the option tire are two good ideas that will make for even more thrilling races. I particularly like the fact that both the flat rear wing and the option tires will be easy to recognize by the spectators.”

Miguel Molina (237 laps/1m 33.242s): “These were two good days for me. Unfortunately, due to the changeable conditions, we weren’t able to do all the things we’d been planning. But it was enough to give me assurance for the season opener. That I’m the quickest Audi driver this week is a pleasant feeling – but, honestly speaking, doesn’t mean that much to me. The thing that’ll count is qualifying at Hockenheim. I tried out the option tire twice and really enjoyed it. I’m already eager to find out what strategies we’ll be seeing with the new possibilities in the races.”

Edoardo Mortara (202 laps/1m 33.678s): “A good test despite the changeable conditions – unfortunately without a happy ending for me. At the end of my test time on Thursday, I was running on a drying track, hit a wet spot and lost control of the car. Sorry about that! But before the incident, we finished a major portion of our planned workload and the car left a good impression. Now I’m looking forward to the season opener.”

Mike Rockenfeller (199 laps/1m 33.630s): “For me personally and for the cooperation with the team it’s been a very good week at Hockenheim. Due to the constantly changing conditions we were able to go through almost all the scenarios – from a drying track to pouring rain. The experiences with the option tire were very positive. You almost don’t want to drive the normal compound any more once you’ve tried it. I was able to test the DRS a bit as well. I’m eager to see how it’ll feel in actual use in the race.”

Timo Scheider (188 laps/1m 34.135s): “My test week started with a bit of misfortune because I was only able to drive for half a day on Wednesday due to a few technical issues. We did what a test is intended for: we tried out a lot of things, swapped cars now and then and gathered experiences. It’s nice that the final sprint before the first race is coming up now, because tests are good and well but the real fun only starts at Hockenheim with a full Motodrom.”

Adrien Tambay (216 laps/1m 33.846s): “I’m very pleased with the two days. It was a lot of fun working together with my new race engineer Franco (Chiocchetti). We gelled well and managed to finish a lot of our tasks. Obviously, it’s hard to assess where we stand compared to the competition. But I definitely feel ready for the first race. DRS is exactly the right thing for a racer and will cause a lot of action. The option tires were good fun too.”